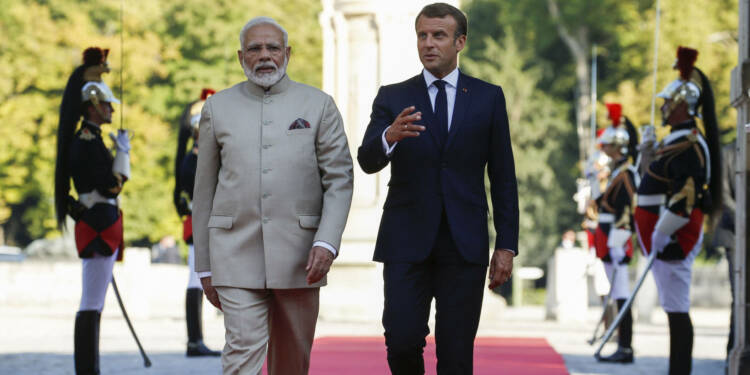 Samuel Paty’s beheading had received a strong response from the French President. He criticized the beheading and vowed to stem the growth of radical Islam in France. But now Macron seems to take up the role of the leader of the western civilization in its fight against Islamist terrorism.

Emmanuel Macron has become the voice against Islamist terrorism. He is leading the fight in France and has been vocally critical of Islamist terror activities around the world. And though he’s had support from western leaders, India became the first non-western state to stand up and support France vocally; Narendra Modi has always been vocal about the threats of terrorism and now Macron is amplifying his message to the world.

Samuel Paty’s beheading was not the first attack on the French lacite. In 2015, attacks on the Charlie Hebdo headquarters in France were a warning of the rising Islamist terror in France, and now, attacks on Mozambique, which has a large French-speaking Christian population, is an extension of the rising terror activities of the Islamic radicals.

The French criticism of Islamic radicalization was therefore inevitable. Since the EU open its borders to immigration, France and other major western powers have seen a rise in terror activities that identify their benign growth in the radical ideas of Islam. France, the birthplace of modern western ideas, the leader of civilizational evolution in the west has stood up to protect the culture, identity, and way of life in the face of a rising Islamist terror.

Macron, through its tweets, is not just standing up for the western world, but, is protecting and defending the cultures of other free societies and francophone countries. The western culture is facing “le grand replacement” as the attacks are not a result of the refugee crisis but the first steps of the Veni, Vidi, vici of the Islamist radicals.

Read More: France always stood with India, be it on Pokhran or Kashmir. Today, India is standing strong by its side

India became the first non-western state to stand up against Islamist terrorism, this was not the first time it has done so and did not do so because it was France. Since its independence, India has been subjected to Islamic terrorism on its territory starting with Kashmir. The modern history reflects India’s problems with Islamic terrorism from Pakistan, and Al Qaeda. But since the last decade, India now faces the issue of not just state-sponsored Islamic terrorism but a global rise in Islamic radicalization that now incubates on its territory in Kerala and Karnataka.

Therefore, Since Narendra Modi has come to power, he and his government have been labouring to address the issue of terror activities. PM Modi, at the start of his tenure, met his Pakistani counterpart Nawaz Sharif to negotiate for a peace process, but extremism doesn’t understand the word of peace.

Therefore, PM Modi took it upon himself to counter the threats India faces from the Islamic extremists. Surgical strikes and his speeches in the United Nations has become the main weapon in his arsenal to tackle this rising threat to peace and stability. He has highlighted Pakistan’s role in breeding and protecting jihadists. He even convinced President Trump during his visit to India, to speak against Islamic terrorism and present a joint stand against this rising threat.

Therefore, with Trump’s presidency in question after the latest US elections, it was necessary for a western leader from the P-5 group to take a stand against this threat to peace and harmony. Emmanuel Macron has done just that. He has risen as a symbol of strong leadership against Islamist terrorism and has called for others in his fight to stem the terror activities which are nurtured by the radical Islamists.

Narendra Modi’s struggle to address the issue of Islamic terrorism is will now bear fruits as Macron pushes the issue onto its western allies. The world has taken the first step in its fight against radical Islamist extremism and India is leading it from the front.