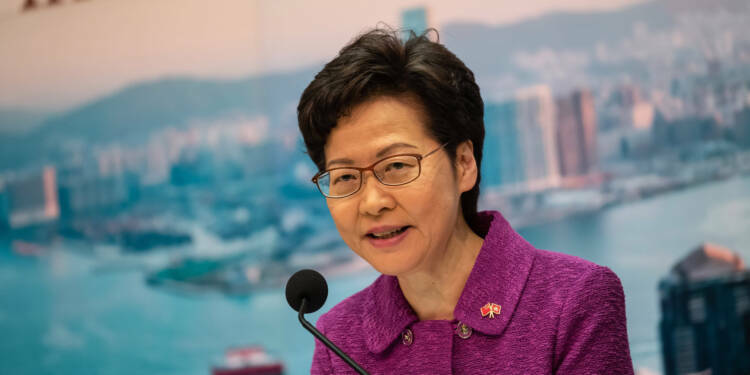 Carrie Lam will go down in history as the leader who has abandoned her own people. After the strategic destruction of Hong Kong’s economy at her own hands, she now has turned towards ‘restoring the political system from chaos’, and while explaining the idea, she went ahead and declared the city a national security threat.

It must have come as a surprise to the people not familiar with the developments in Hong Kong, but, those who already know wouldn’t be. Hong Kong’s Chief Executive, in her annual policy address, prioritised issues like restoring order and protecting China’s national security. By only paying mouth service to serious issues like economic recovery and the housing crisis in Hong Kong, she made her intentions clear. As per the SCMP, Chief executive said that city has become an obvious weak link in terms of national security and presents significant risks to the country which is China. These statements signal the obvious, that is, blurring of lines in the ‘one country, two governments systems’.

She also mentioned things about integrating Hong Kong further with the other Greater Bay Area (a region that includes Hong Kong, Macau, and nine cities in China’s Guangdong province) cities, thus, furthering the cause of her overlords in Beijing. Earlier she has showcased her prowess by single-handedly destroying Hong Kong’s economy. She let the Chinese authorities develop cities like Shenzhen and others at the expense of her own city.

On October 11, 2019, China unveiled a new comprehensive reform and development plan to build Shenzhen into a pilot demonstration area of robust economic growth under ‘socialism with Chinese characteristics’, which basically means to imbibe everything capitalist, but under state surveillance and indirect control, a leaf from the books of the East Asian tiger economies.

Carrie lam, Beijing’s puppet and now the political leader of the Hong Kong Special Administrative Region (HKSAR) with no opposition, promoted the idea without objections and justified that Hong-Kong must maintain its competitiveness and create a “dual city economy“.

Read more: After ensuring the fall of Hong Kong, Lam is helping CCP to empower Shenzhen at the cost of Hong Kong.

After this economic disaster, no possible improvement in the standard of life of Hong Kongers possible and the ever-increasing cost of living, Beijing with their puppet Carrie Lam turned a bustling democracy into a dull city, with bleak future prospects and increasing curbs on freedom. The assessment may look straight from the Batman Movie’s description of Gotham city, but this is the new reality of Hong Kong, and it has been possible because of the capabilities of Carrie Lam and her courtiers kowtowing to Beijing.

The highlight of Carrie Lam’s address was her declaration of fellow Hong Kongers as rowdy and not Chinese enough. Some people in Xinjiang and Tibet are also not Chinese enough, and we can already see the inhumane process of transformation into becoming Chinese, or Hanisation. Thus, to make such statements means that she is okay with her fellow people going through the same hellish situation which those people of the autonomous region are going through.