After meeting PM Modi, Uzbekistan willingly agrees to join the INSTC which will connect India and Russia through Central Asia 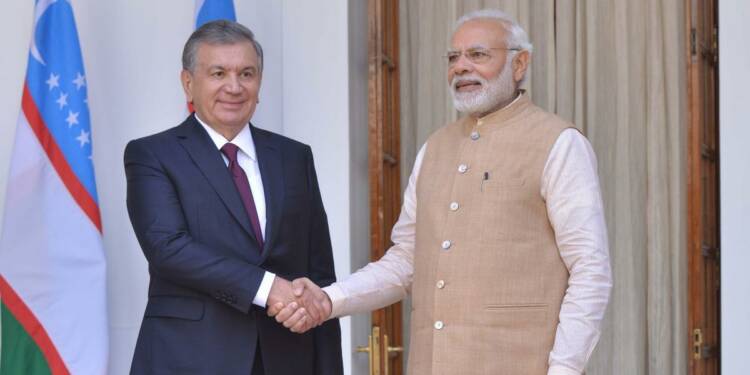 India and Uzbekistan signed nine cooperation agreements in several areas on Thursday and agreed to step up efforts towards the early completion of a bilateral investment treaty.

Furthermore, Uzbekistan willingly agreed to join the International North-South Corridor. Uzbekistan has given a strategic nod to joining the International North-South Transport Corridor in a significant boost to India’s regional connectivity plans. With massive Chinese BRI investments in Central Asia, Uzbekistan’s willingness to join the INSTC is a huge victory for India to counter Chinese BRI and to bypass the Pakistani blockade in the POK. This is a huge diplomatic victory for India as it opens up the whole Central Asian region via the Chabahar port and gives India greater access to Russia and Europe.

Uzbekistan has given it “in principle concurrence” to joining the International North-South Transport Corridor (INSTC), the Ministry of External Affairs (MEA) said on Friday. MEA Joint Secretary (Eurasia) Dr. Adarsh Swaika, addressed a special briefing after the India-Uzbekistan Virtual Summit, he said that there is physical connectivity on the INSTC route from the seaport of Bandar Abbas to Baku to Russia, but the INSTC has been less used.

He further said, “Uzbekistan is a doubly landlocked country. We as a principle would welcome any initiative that would increase the connectivity between Afghanistan and Uzbekistan or with other central Asian countries. As far as INSTC is concerned, we had requested Uzbekistan earlier when President Shavkat Mirziyoyev came in 2018. Prime Minister Modi had made a request to him for joining the INSTC. Today President gave his in-principal concurrence to joining INSTC,”

The International North-South Corridor is a multi-mode network of ship, rail, and road routes for transporting goods between India, Iran, Afghanistan, Azerbaijan, Russia, Central Asia, and Europe. The objective of the corridor is to increase trade connectivity between major cities such as Mumbai, Moscow, Tehran, Baku, Bandar Abbas, Astrakhan, Bandar Anzali, etc.

Mumbai is linked to Moscow by the International North-South Transport Corridor and passes through Iran and Azerbaijan. The efforts of all stakeholders were to increase its popularity and an agreement was signed earlier this year between India’s Container Corporation and Russian railways to facilitate cargo movement.

The transit route will help in bringing down trade costs and time which will enable India to cement its position in the Middle East. A study to identify the bottlenecks in the transit route showed transport costs were reduced by “$2,500 per 15 tons of cargo”.

Moreover, gaining entry into Uzbekistan and linking the INSTC through the Chabahar port will also help India cement trade relations with its most trusted and privileged ally in Russia.

The increased interdependency between India and Russia will be a blow to Chinese ambitions as Russia seeks a way out of the Chinese trade dependency. Thus, furthering trade relations between India and Russia is a welcome approach to counter the Chinese BRI, bypassing it, and at the same time stemming the rising growth of Chinese aggressive expansionist investment in Central Asia.

Read More: ‘It is a debt trap,’ By refusing to back China’s BRI, India gives a clear message to Central Asian countries in SCO Summit

Uzbekistan’s willingness to join the INSTC further opens up the Indian ambitions and presents India with unlimited opportunities to expand its presence via land in Europe and Central Asia, effectively countering the Chinese ambitions and stemming the rise of Chinese expansionism in a hostile international structure.

‘Is Xi Jinping coming to Japan?’ ‘Ummm…No’ was the Japanese Ambassador’s answer to China