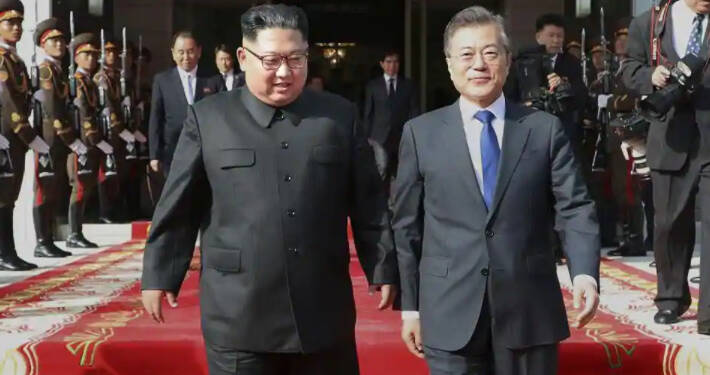 The uncertainty surrounding the American Presidential Elections has left US allies preparing for a tentative Biden Presidency. South Korea, a mainstream US ally, is no different. The main agenda of Seoul’s foreign policy is to ensure peace on the Korean Peninsula and that North Korea doesn’t get way too belligerent. With Trump, Seoul was moving closer to this avowed goal but South Korea fears that a volatile Biden might again throw the Korean Peninsula into dangerous uncertainty.

So, South Korea has already started preparing for the undesirable contingency of a Biden administration coming to power in the White House. Seoul is warming up to Pyongyang, to ensure that North Korean Supreme Leader Kim Jong-un doesn’t leave the negotiation table and start playing into China’s hands all over again. To show its bonhomie towards Pyongyang, South Korea even banned the age-old practice of launching propaganda leaflets into North Korea on Monday.

North Korean defectors living in South Korea and other human rights campaigners have, for decades, sent anti-North Korean leaflets over tightly guarded Korean borders, through balloons. Even bottles have been used to transfer messages across the border rivers into North Korea.

The leaflets strategy was basically an attempt by a democratic South Korea to instigate the North Korean population against the brutal, Communist regime in Pyongyang. In some cases, even food, medicine, money, mini radios and USB sticks consisting South Korean dramas and news updates were also sent into North Korea.

However, in a historic move on Monday, the South Korean Parliament amended the Development of Inter-Korean Relations Act and barred the scattering of printed materials, goods, money and other valuable items across the tense Korean border.

The Amendment also restricts the use of loudspeaker propaganda, which the South Korean military used in the past as a part of psychological warfare against the North Korean troops.

What South Korea’s President Moon Jae-in is trying to do here is to reach out to Kim Jong-un with a subtle message, much before a possible transition takes place in the White House. Moon is a seasoned politician. He understands how Trump’s policy of talking to the rocket man helped Seoul.

When the US and South Korea engaged Kim Jong-un, North Korea stopped acting as China’s Client State. Pyongyang even started a sense of proportionality in its otherwise hostile narrative towards South Korea. All in all, South Korea felt that it would be able to get rid of the eternal North Korean Nuclear threat by engaging Kim Jong-un in diplomatic talks.

Now, Moon is worried that if Biden comes to power, the Democrat will push his catastrophic strategy of no talks till North Korea doesn’t dismantle its entire nuclear program. Moon knows that Biden’s strategy is destined to fail, because whenever Washington becomes too stubborn with North Korea, Pyongyang ends up playing into China’s hands and Beijing starts using North Korea as a proxy against Japan, South Korea and the US.

But Moon is telling Kim Jong-un that he intends to continue taking diplomatic talks further. And there was no better way to communicate with Pyongyang than banning the leaflet propaganda. The leaflets are a major sticking point in Korean relations. Earlier this year, even Kim Jong-un’s politically powerful sister, Kim Yo Jong had said that South Korea should ban the leaflets or face the “worst phase” of relations.

So, Moon has actually given what should keep the rocket man on the negotiation table, even if Biden doesn’t help Seoul in negotiating with Pyongyang. Biden might be planning to halt Trump’s Korea peace initiative, but Moon won’t let the Democrat ruin what the sitting US President has been able to achieve.