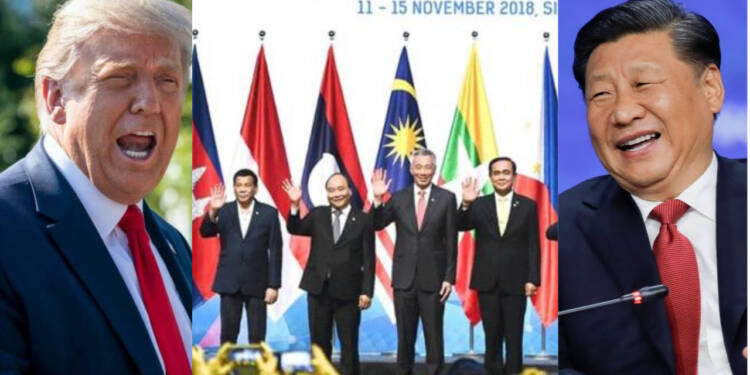 When Mike Pompeo had stated that “securing our freedom from the CCP is the mission of our time and America is in a perfect position to lead”, it showed the vigour and strength that the Trump administration had put on the table in the ongoing global war against the Chinese hegemony and bullying.

During the entire Trump tenure, the trade relations between ASEAN and the US saw a boost in numbers and a fair attitude in all of the dealings. But now, the upcoming Biden administration might try to hamper the rapport that was cultivated carefully over the years. For example, when the Philippines President Duterte had decided to crack down upon the illegal drug trade, the Obama administration with the same Biden as the deputy had put hurdles in the Philippines’ path to being drug-free.

Read More: ASEAN pulls a fast one over China, puts the code-of-conduct in the South China Sea in an infinite loop

In the same manner, Indonesia has also been on the receiving end of Trump’s benevolence. Jakarta is hoping to raise funds for its path to economic recovery and the US is playing a big role with its big pockets. The US had also extended the tariff exemptions for Indonesian exports by seeing Chinese aggression and bullying in the Indo-Pacific sphere.

The South-East Asian countries geographically lie on the borderline of the contention between Washington and Beijing. As America and the rest of the world are isolating China inch-by-inch every day, the ASEAN countries need to be sure of their priorities. Most of the western companies which had been operating their production facilities in China have decided to diversify and the biggest gainers have been the South East Asian nations, for example, Vietnam which received the biggest transfers like Apple and Samsung.

The ASEAN nations benefited immensely during the Trump administration, a report suggests that these countries received $24.5 billion in investments, in 2019 only an increment of 60% compared to 2016, the last year of the Obama administration. Countries like Cambodia, Vietnam, and Indonesia saw boosted exports to the US and elsewhere after Trump took charge.

Despite the large and long-term profits and benefits that came with American friendship in the Trump era, some Southeast Asian nations decide to play a ‘balancing’ act with their relations with the US and China despite the logical awareness of Chinese expansionism and new colonial behaviour. The ASEAN nations must be wary of the Chinese intentions after the situation in the South China Sea became the talk of the town.

But this generosity might change in the upcoming Biden years. The strong actions taken by the Trump administration against Chinese bullying might not get replicated when Biden sits on the chair. Trump’s tough stance in the economic sector and against Chinese spying activities in the US and elsewhere might get brushed under the carpet slightly if not entirely.

Also, in the Indo-Pacific security structure that is quickly gaining pace, ASEAN countries might get left out since they do not yet have the spine to fight against Chinese bullying. ASEAN right now must learn from the Nepal and Pakistan experience that the helping hand comes with a hidden dragon in its sleeve which is ready to pounce upon the vulnerable.

The ASEAN nations are still thinking of the punitive economic gains from China led order like RCEP but they tend to overlook what is coming next for them – rude Chinese assertiveness and forcible expansionism. Now, unless they come out of the illusion that is the existence of China’s ‘peaceful rise’ and realises who are the real friends, it will be a tough road ahead for the dream of an ASEAN centric world.