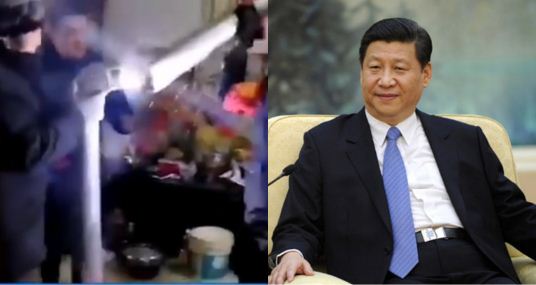 The Chinese Communist Party is the most impractical governmental and administrative setup in the contemporary world which is ruling over a major world power. While the country has been witnessing unprecedented cold and winters exceeding all previous records, the Chinese Communist Party, instead of looking for people’s well being, it is engaged in snatching heating supplies from its own citizens. This is happening as the people are not complying with the directives and orders, given there are only two options, either to follow the rules and die because of the cold, or defy the orders and manage to live another day.

The Chinese are facing these problems as the country’s thermal power plants are running out of coal supplies, thus, Chinese Communist Party, to satisfy the ego of Xi Jinping, instead of resuming the import of coal from Australia, is forcing its own citizen not to use heating equipment as well as coal, given both are in short supply.

Earlier TFI had reported as to how power rationing seems to be becoming the norm in several parts of China. Requests to reduce electricity usage have been made, for instance, in the Hunan province with a population of over 67 million people. As per local media, power rationing has been blamed on higher coal prices, as the domestic prices have surged far above the threshold price set by the Chinese government. Yet, Chinese officials keep denying the role that Beijing’s informal bans on Australian coal had to play in the entire fiasco.

Chinese state-run newspapers Security Times reported that most of China’s power plants are designed to use high-quality Australian coal, but since Chinese authorities started sanctioning Australian imports like coal in recent months, coal exports to China dropped in the first three weeks of November. Vessels were held up at Chinese ports carrying coal valued at about 840 million dollars following China’s ban on Australian coal.

Given this situation and the inability of the population to just accept the orders and die of hypothermia, the Chinese officials have intensified the process of confiscating heating supplies. However, the authorities are portraying it to be part of China’s push to move towards a more sustainable and renewable energy source based populace. The reason given by the administration and party is a bluff, which could be easily called off. The authorities are quoting a three-year-old initiative, which was termed as three zeros movement. The initiative was launched to counter environmental degradation and here the three zeros referred to zero heating boiler, zero coal-fired stoves and zero coal usage.

However, if that was the case, then why did they started scrutinising its implementation, only when the coal was in such a short supply. Why did it take three years for the authorities to gather so much rigour, that the lives of their own citizen matter less than the movement?

The prices of coal have been growing rapidly the past few months and prices have reached record heights. As per NTD News, at the same time, all the northern province are imposing strict coal-burning rules and authorities there are trying to eliminate coal and coal burning in local households used to heat buildings in winter, even though the temperature in parts of the region drops below zero. The fact that the policies are being forced down the throats of their citizen recently, means that the country is bleeding coal.

China’s #ElectricityShortage may be at a critical stage. Some power plants report having only a few more days' worth of coal to produce electricity.

According to Chinese media, having insufficient #CoalSupplies has become a common problem for the country's #PowerPlants recently pic.twitter.com/CgktG7mjdn

NTD has reported more large-scale triple zero movement going on in several of the northern provinces of Shanxi where the temperature has dropped to just 5 Degrees Fahrenheit. The purpose of this movement is to prohibit people from burning coal. CCP has ordered affected regions to change their heating supply from coal to either gas or hydroelectricity. The policy forbids people from generating heat by burning coal in the winter. CCP slogans like ‘you will be fined if there’s smoke, detained if there’s a fire and imprisoned if you resist’ can be seen on the streets from time to time according to reports by Radio Free Asia.

The frenzy has reached such a level that local governments in China have dispatched a large number of civil servants to break into villagers homes and take away people’s coal and firewood and even dismantle their stoves. This just goes to show to what level the CCP can stoop to satisfy the ego of its megalomaniac ruler.

A Chinese northern province is imposing strict #coalburning rules as the temperature in parts of the region drops below zero.

NTD reported that in just one county of around 30,000 people a set of officers were dispatched to confiscate heating supplies and they dismantled over 5000 coal-burning facilities and got over 1,500 tons of coal and more than 73,000 pieces of honeycomb coal and over 700 tons of firewood from the local residents.

Many citizens took to social media to express their empathy and support towards their fellow countrymen and blame the CCP. It was mentioned in the NTD report. Some netizens said that to do such things in this year’s severe cold winters, is to push people to a dead-end. Another netizen says “I guess the CCP wants to kill more people with a cold since the virus didn’t kill them off.”

While the CCP is forcing people to move away from the coal-based and other heating equipment, in these harsh weather, it has not accepted that it is due to the ban on coal imports, rather pushed the baton to a three-year-old three zeros movement. Xi Jinping wants people to move away from the traditional methods of heating and towards gas or hydro-electricity, but the party would not even provide them with the required infrastructure. In short, Xi Jinping wants the Chinese people to die of hypothermia and not even complain.