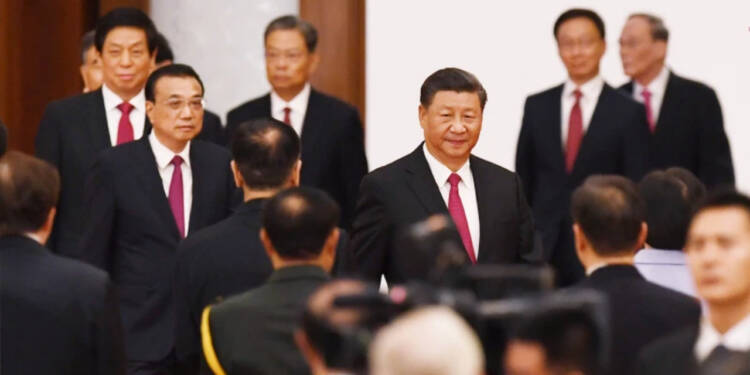 Xi Jinping is on an absolute rampage, amending laws, passing new ones, and now a diktat to not criticise. While CCP members in China rarely go beyond party lines to express their opinions, perhaps it was the latest show of criticism by the all-powerful and now missing Jack Ma that Jinping needed more reassurance. On Monday new rules were introduced that banned cadres from expressing opinions.

Jinping is facing an acute paranoia ever since Jack Ma’s criticism. He has changed China’s defence structure, taking all command of declaring war and initiating peace. He has waged a war against Chinese major e-commerce companies such as Tencent, Jack Ma has disappeared, the Chinese rich are fleeing the country, and now Jinping has decided to tape the mouths of people of the CCP cadres.

On Monday, the Chinese Communist Party introduced a new set of rules that banned cadres from expressing opinions and dissenting views from its own ranks.

The revised set of rules regarding complaints says that cadres can express their complaints only to their superiors but are not allowed to air them publicly. Moreover, even opinions that are “not consistent” with the central leadership will be banned under the new set of rules.

These rules are also supposedly consistent with Xi Jinping’s ideology of “Thought on Socialism with Chinese Characteristics for a New era”. The concept is now engraved in the Chinese constitution.

The rule book which was updated 16 years ago, has supposedly been breathed with fresh life by banning the freedom of speech. The new rules make it clear that the 92 million members are not allowed to express views other than the one provided by the central leadership as anything else will not be tolerated.

South China Morning Post reported, “A member of the party must not publicly express opinions that are inconsistent with decisions made by the Central Leadership” according to article 16 of the revised regulations.

Read More: You can feel Jack Ma’s fear of Xi Jinping in the changing tone of Hong Kong newspaper SCMP

Besides, Article 11 stipulates “While party members are ‘entitled’ to report misconduct by other members, including those who held a higher rank, they must not disseminate such information at will and must not do so on the internet.”

These rules were revised back in 1995, and the state media hailed these amendments and revisions and described them as “boosting democracy within the party”. But in 2014 Wang Qishan, then the party’s top corruption buster and now Vice President published an article in People’s daily arguing that joining the CCP meant “voluntarily giving up certain rights and freedoms”. It now seems that more of those certain rights and freedom are being taken away from the members of the CCP.

Jinping did not have a great year in regards to China’s foreign policies. 2020 was a year of immense opportunity for China to take a leading role in the international system as the US kept receding. But instead of presenting a Chinese masterclass on diplomacy, Jinping showcased a Chinese blunder.

From banning goods to getting delisted from US stock exchanges, and the adoption of China plus one policy by every other state worldwide was a slap on the face and utter humiliation for China. Jinping’s policy destroyed China’s so-called soft power and China’s economic advantage over other states, and the result was Jack Ma’s blatant criticism, the start of Jinping’s paranoia and decisions like issuing diktats to CCP members about what to say and what not to.