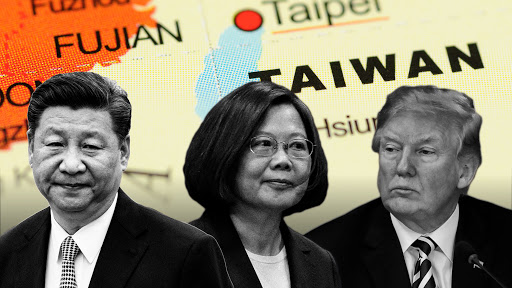 The United States and Taiwan held a “sensitive meeting” regarding political and military cooperation recently . The details of the schedule of the meeting were made public, apparently to provoke China. Donald Trump has backed Taiwan with a number of major defence deals, and with just a fortnight left in the office, the latest meeting could be of significant importance regarding the future of US-Taiwan relations.

Beijing claims that Taiwan is part of mainland China and is determined to use “force if required.” It has strongly opposed the growing cooperation of the US with the island country.

Meanwhile, China’s hostility against Taipei has been growing. The United States has an ambiguous clause to defend Taiwan in case of any Chinese armed aggression across the Taiwan strait. Meanwhile, the US keeps offering major arms deals to Taiwan at regular intervals to maintain a level of military balance to deter any untoward aggression. During

Washington held the meeting online on Wednesday night (7.30 am on Thursday in Taipei). The meeting was attended by US Assistant Secretary of State Clarke Cooper for Political and Military Affairs.

Foreign Ministry Spokesperson Joanne Ou responded to questions at a regular press conference that afternoon, confirming that a meeting had indeed taken place and saying that the specific details of the dialogue would not be disclosed, CNA reported.

Due to objections from Beijing, Taipei has not yet announced who represented the nation in talks with the United States.

In response to Beijing’s opposition to the bilateral meeting, Ou said she is not surprised by China’s comments. The “one China” principle is false, she stated, pointing out that Taiwan has never been part of China.

Speaker Joanne Ou, from Taiwan’s Department of Foreign Affairs, said Wednesday that in matters of mutual concern, Taiwan and the US have maintained different levels of communication networks. She noted that both sides have kept the lines of communication open to improve political, financial, security, and other cooperation.

AnSCMP report previously noted that foreign anddefence officials will attend the videoconference on regional development, US-Taiwanese military cooperation, and weapons sales. The fact that the security or regional cooperation agreements will be signed by both sides is not yet understood.

The spokesperson urged the US to “stop its official exchange and military contact with Taiwan, lest it should further harm China-U.S. relations and cross-straits peace and stability”.

The dialog between Taiwan and Washington takes place two months after the first EPP dialog between the United States and Taiwan was conducted in November 2020. The talks were held between US Undersecretary of State Keith Krach and Taiwanese Secretary of State John Deng, with members from the Taipei American Institute. The government of Taiwan had virtually joined the discussion.

The Chinese have been growing incredibly wary of the increased number of deals that the US has signed with Taiwan in the last few months. Trump’s administration has aggressively pursued its Taiwan policy and has been vocal in its support for Taiwan’s independence, much to China’s dismay. The latest meeting which could be the last under the Trump administration could be of significant importance in making up America’s future foreign policies regarding Taiwan and Jinping seems jittery in envisioning a future with even closer US-Taipei ties.

Ever since MBS came to power, Saudi Arabia has suddenly started looking like a nation with astute diplomatic skills