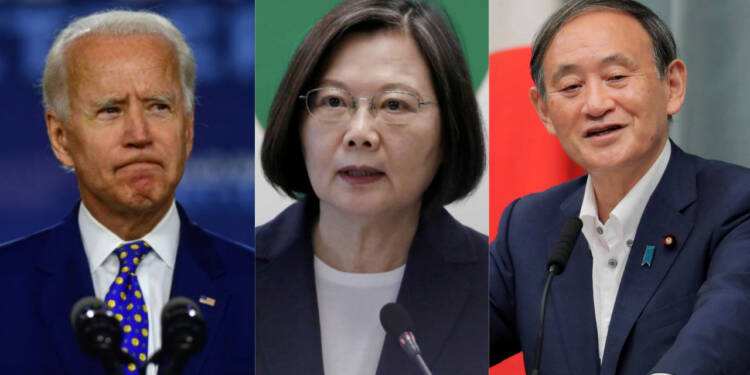 The Taiwan issue had been the centre of Trump’s policy of his containment of China. Taiwan is an important geo-strategic chokehold on China’s trade as it is situated on the Taiwan Strait — a passage of utmost importance to Chinese trade. Therefore, Japan has asked Biden about his stand on Taiwan and has urged him to be strong in the fairly hostile international structure.

Taiwan has been one of the pressing points in US-China relations. President Trump has sanctioned more than 7 weapons deals to Taiwan worth billions of dollars in a show of support and backing to Taiwan. India, Japan, and other states have strategically pressed the Chinese nerve to deal with diplomatic blows, is a necessary step to contain the Chinese belligerence. But Biden’s moderate policies could weaken the US’s policy to contain Chinese aggression.

The Japanese defence official on Friday urged U.S. President-elect Joe Biden to “be strong” in supporting Taiwan in the face of an aggressive China, calling the island’s safety a “red line.”

Yasuhide Nakayama, State Minister of Defense told Reuters, “We are concerned China will expand its aggressive stance into areas other than Hong Kong. I think one of the next targets, or what everyone is worried about, is Taiwan”.

Japan’s involvement with Taiwan has also flourished on a predominantly non-governmental basis in recent years. In Tokyo, the ‘one China’ strategy is moving its relations in Washington with its long-standing military ally and its neighbouring Giant China delicately balance.

Japan shares strategic interests with Taiwan, which is situated on sea lanes from which Japan provides most of its energy and trade flows.

In an interview, Nakayama, Japan’s Deputy Minister of Defence, urgently called on Biden to pursue a similar policy on Taiwan, as the outgoing President Donald Trump. “So far, I haven’t yet seen a clear policy or an announcement on Taiwan from Joe Biden. I would like to hear it quickly, then we can also prepare our response on Taiwan in accordance,” Nakayama said.

Biden’s Taiwan policy has been unclear. As a senator, decades earlier, Biden questioned whether the United States had a “duty” to protect Taiwan. But many in his foreign policy circles understand that U.S. imperatives have shifted as China is growing more authoritarian and seeking to shape global institutions.

Increased US support for Taiwan, including weapons sales and visits to Taipei by senior United States officials, has annoyed Peking, which has further strained the Sino-US relations.

China considers Taiwan to be one of its provinces and has never renounced the use of force to put it under Beijing’s influence.

From the word go, Trump’s policy on Taiwan was very clear. From the congratulatory phone calls to the arms deals, Trump put Taiwan on the world’s radar.

Though Joe Biden does not share equal excitement for the cause of Taiwan, the policies of Donald Trump will force him enormously to preserve those ties. Although Biden wants to normalize ties with China, he cannot reverse developments concerning relations between the United States and Taiwan. His behaviour in Taiwan would be highly examined, particularly by the people of the United States, if he decides to reverse policies.

Read More: Trump may give recognition to Tibet and Taiwan before leaving office in the last and final blow to China

To keep Taiwan secure and at the same time, to keep a courageous front against Chinese pressure to reverse US policy on Taiwan, Biden must balance the path forward for the growth of both the US and Taiwan.