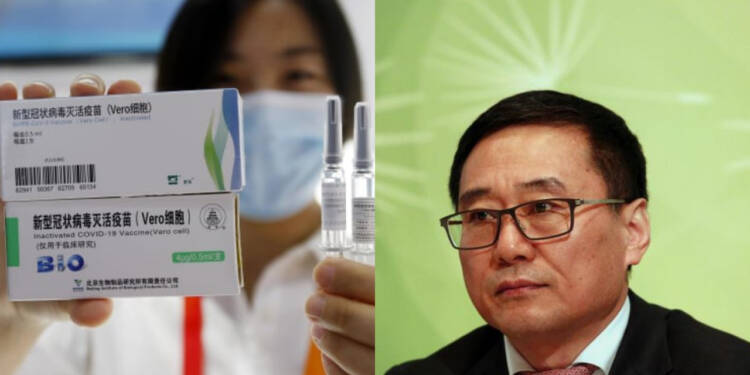 Sinopharm, a leading, albeit lagging in efficacy numbers, Chinese vaccine giant announced that its Chairman and a director have resigned on Tuesday citing personal reasons. After the vaccine was approved in China, Tao Lina, a famous Chinese vaccine expert described it as the world’s worst vaccine.

According to a filing by the Hong Kong-listed firm, the company cited personal reasons for Li Zhiming’s resignation. Li Hui, a director and audit committee member of the China National Medicines Corp. subsidiary of Sinopharm, also resigned on Tuesday for personal reasons, a separate filing disclosed.

The Chinese authorities approved a vaccine produced for general launch by a Sinopharm subsidiary in Beijing in late December. According to state media, the company said the vaccine had an effectiveness of 79.34 per cent after a phase three test.

Despite having one of the worst efficacy rates, The Chinese state media and the Chinese government are still pushing the Sinopharm vaccine on their citizens.

There are a few side effects of each vaccine but 73 negative effects are well beyond their limits. Tao also says that this is ‘absolutely unprecedented’ in the number of adverse reactions. He also mocked the user’s manual as a ‘long disclaimer.’

Read More:‘What happens in Rio doesn’t stay in Rio,’ Brazil is exposing the Chinese vaccine like a legend

Despite the criticism from one of its own vaccine experts, China is continuing with the push of the Sinopharm vaccine. Chinese state media reported on Friday, “COVID-19 vaccine developed by China National Biotec Group (CNBG), a Sinopharm subsidiary, is safe in those aged between three and 17, based on clinical data obtained by the company.”

According to Xinhua News Agency, CNBG Chairman Yang Xiaoming, without providing further details said, “It should be noted that for three to five-year-old children because their immune system is still developing, they must be carefully and closely monitored during vaccination.”

The vaccine being developed by CNBG’s Beijing unit was the first in China to be approved for general public use in late December.

Even more alarming, is the bulletin issued by the Chinese government that if any person is harmed due to the side effects of the vaccines, then the Chinese manufacturer is not liable to suffer any losses.

A survey conducted in November earlier revealed that about 90 per cent of China’s frontline workers are not enthusiastic about the Chinese vaccine. According to this survey, only 10 per cent of workers at a local hospital in Shanghai expressed a desire to be vaccinated with a Chinese Vaccine for COVID-19. The remaining 90 per cent rejected any Chinese Vaccine due to a lack of confidence in the inefficient and scammed vaccine industry.

The efficacy rate of the Sinopharm vaccine is not up to global standards and despite this ‘known drawback,’ the Chinese government is aggressively pushing the vaccine on its own citizens and abroad. This could lead to a massive pharmaceutical disaster and this could also be the reason why Li Zhiming and Sinopharm’s Li Hui a director and audit committee member of Sinopharm subsidiary China National Medicines Corp. resigned.