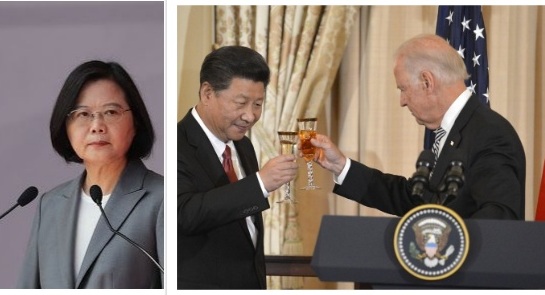 Biden put the weight of the United States behind Taiwan after China intruded the Taiwanese air space yesterday, but to no avail. As for the second day in a row, Chinese air force planes intruded Taiwan’s air space.

China has upped its ante the day since Biden was sworn in as President. From sanctioning former US administration officials such as Mike Pompeo to now intruding Taiwanese airspace two days in a row despite a warning by the United States. China is carrying out its belligerent activities as if Biden’s presidency has emboldened it.

The presence of so many Chinese combat aircraft on this mission – Taiwan said it was made up of eight nuclear-capable H-6K bombers and four J-16 fighter jets – was unusual. But what was more usual was the presence of even more Chinese aircraft in Taiwan’s sovereign airspace.

Unnerved by China’s ignorance of US warnings, Taiwanese Vice president reached out to its regional partners India and Japan among others except the US, showing a total lack of faith in the ability of Biden’s administration to keep China in control

Taiwan’s Vice President Lai Ching-te tweeted a message calling for support from its regional partners like India and Japan. The Tweet read “Taiwan and Japan have much in common. We not only suffer earthquakes often; we also face economic and geopolitical threats from a totalitarian power. Like #India, #Australia, #Palau, and other regional partners, #Japan is a solid friend. Friends need to help each other.”

Taiwan and Japan have much in common. We not only suffer earthquakes often, we also face economic and geopolitical threats from a totalitarian power. Like #India, #Australia, #Palau, and other regional partners, #Japan is a solid friend. Friends need to help each other.

China was undeterred by the presence of a US aircraft carrier or the Biden administration offering words of support to Taiwan. Thus, the Taiwanese Vice President reached out to Taiwan’s friends in the region to face the economic and geopolitical threat from a totalitarian power i.e., China.

China’s unwillingness to pay heed to the warning of the United States and Taiwan reaching out to India, Japan and other regional partners for support against China is a sure indication. It indicates that while Taiwan is still dependent on the US for military support, but its faith in the Biden administration to act more forcefully to protect the island is dwindling.

The Trump administration had made Taiwan its ‘trump’ card against China. It offered regular and massive arms deal to the tiny island to protect itself from any Chinese aggression. Biden on the other hand has not shown any kind of decisiveness while dealing with China.

When China sanctioned Trump’s officials, it meant that China had sanctioned 28 US citizens, who held the highest positions in the US’s executive body. Biden has still not taken any reciprocal action.

Moreover, Biden has removed China from his policies as a strategic threat as was evidenced by the new State Department website.

These moments of indecisiveness will cost the US its sphere of influence in Asia. Unable to protect Taiwan’s independence and sovereignty should be high on Biden’s list, but as things stand it does not appear to be so. These non-actions will embolden Chinese belligerence even more.

Biden’s policy of internationalism has already made its allies uneasy. Refusing to see China as a threat, Biden wants to be a peacemaker. Biden’s refusal to put on a realist cap will cost the US in terms of influence and allies. China has already identified Biden’s weakness when it comes to taking immediate actions and is using it to its full advantage.