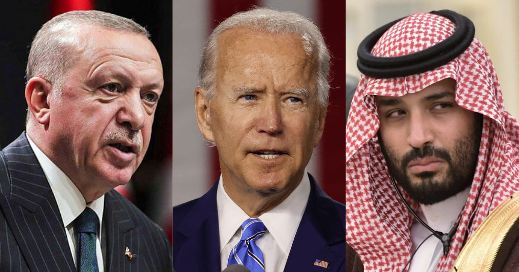 The US foreign policy is turning into a policy of placating Iran to an extent, where it signs the Obama-era Nuclear Deal. While it was just a prediction, just after taking office, many of Biden’s decision has made this assumption turn into a reality. In such a situation where the Biden administration is going all out to embolden a common enemy of Saudi Arabia and Turkey, these countries are trying to sort out their differences in preparation of things going South.

The United Arab Emirates and Saudi Arabia are holding out the possibility of better ties with Turkey that could benefit trade and security in a volatile region, according to people familiar with the strategy. The moves are tentative given the backdrop of longstanding tensions and jostling for influence.

They are also likely to fall afoul of the Gulf duo’s insistence that Turkey reins in support for the Muslim Brotherhood, the pan-Islamist group they label as a terrorist organisation but which Ankara views as a popular movement. But even limited progress could ease frictions over wider regional issues.

However, since the last days of the Trump administration, as it was becoming clearer that Biden would pander to the Iranians, the incorporation of Qatar into the Abraham Accords was the foolproof plan to create a united front to deter Biden from taking irresponsible actions, just to feed his ego and the democrat logic to keeping allies eternally dependent on the USA.

Turkey and the UAE have discussed removing trade barriers, a Turkish official said, adding the overtures encouraged a recent decision to restart flights between the capitals halted by the pandemic. Ties between Ankara and Riyadh appear on the verge of a return to cordiality, thanks in part to the detente between Turkey’s ally Qatar and the four-nation Saudi-led bloc that imposed an embargo on Doha in 2017.

Washington under Biden, has now put a dual whammy on its allies, by firstly restoring aid to the Palestinians and reversing the Trump-era policy and secondly, he has appointed Robert Malley as the next US special representative to Iran, who is supported by the Jewish anti-Israel co-head of the radical left-wing group Code Pink, Ariel Gold.

Biden is adamant to bring back the Obama Era policies. The new US administration has been sending obvious signals that they are very inclined to bring back the Obama Era’s disastrous Iran Nuclear Deal, which has already made the US allies in the Middle East be it Saudi Arabia, UAE and even Israel quite miffed. And now as the MOSSAD Chief is going, the concerns of the Israelis regarding the Biden administration’s reconciliatory approach towards Iran and its change in the view of Israel-Palestine issue has got Natenyahu furious.

However, given the possibility of Biden’s actions hurting the US allies in the Middle East, they are looking for creating a close-knit understanding among all US allies in the region. They want to make sure that Biden can understand the hurt USA will face if it tries to bulldoze its decisions vis-a-vis Iran and Palestine. On the other hand, due to Erdogan’s ill-informed ambitions of becoming a caliph, the situation in Turkey too, is very sophisticated, with the economy in tatters and country facing multiple protests from within.

Read more: Turkey is set to become another Venezuela as 25% of its people cannot even buy food.

In such a situation, any further empowerment of the Iranians is a problem for all the countries in the Middle East – ranging from Saudi Arabia to Turkey. Thus, now they are coming together to decrease misunderstanding and project a united front to the Biden administration and deter it before the new US President makes some unreversible mistakes.

“This isn’t equality, and it isn’t progress,” female athlete speaks out against Biden for his abominable Transgender Executive Order

Twitter chose a wrong man to attack, Indian Prime Minister Modi is going for decisive action in the next 48 hours