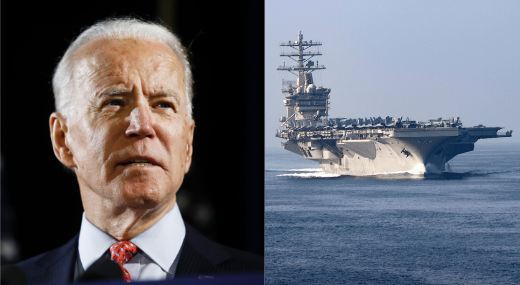 After making a horde of decisions in favour of China, Joe Biden has offered some kind of hope to his Asian allies. Sadly, it is all optics, a show put on for the USA’s Asian allies, so that they don’t give up on Biden, not now anyway.

The Pentagon has announced that the USS Nimitz Carrier Strike Group is moving towards the Indo-Pacific Command area. Pentagon Press Secretary John F. Kirby said the US aircraft carrier would depart from the Central Command “ensuring our national security and deterring conflict in a very critical region of the world.”

In a sign of possibly easing tensions with Iran, the Biden administration has pulled the carrier from the Gulf. “These decisions are carefully weighed,” said the Pentagon spokesman, adding, “Supporting Strike Group is a decision driven by a frank assessment of the threats in the area, and also a frank consideration of the capabilities themselves.”

While the Pentagon and the Biden administration keep reiterating their hard stance on China, much of Biden’s words have had no effect on China’s behaviour, nor its actions. Moreover, Biden has taken many pro-China decisions, reversing several of Trump’s policies.

Trump had used the term “Free and Open Indo-Pacific” to band US allies together for the containment of China. After the election, almost true to his words, Joe Biden has changed it to “Secure and Prosperous” Indo-Pacific.

The change is a signal to all the Indo-Pacific states that Washington has a desire to engage Beijing for a peaceful and thriving Asia Pacific. Biden’s NSA Jake Sullivan had described China as a peer competitor, and an essential US partner.

On the second day of Biden’s Presidency, the State Department Website omitted the CCP as one of the policy issues, and the 5G related page which cautioned against the use of ZTE and Huawei had been scrubbed off.

Moreover, According, to media reports, the Biden administration is reviewing Donald Trump’s decision to designate the ethnic cleansing of China’s minority Muslim Uighurs as ‘genocide’ over concerns that proper procedures were not followed that would uphold such a designation. It came at a time when Australia had just joined the USA and UK in warning firms about the use of products from China’s Xinjiang region in their global supply chains.

And, regarding Taiwan, while the USS Theodore was moved to the South China Sea, China undertook its intrusive activities with the utmost disregard for the US carrier. Even the warnings from the US President seemed to have made no impact as for two consecutive days swathes of Chinese bombers and jets crossed into Taiwan’s air defence identification zone.

Thus, even moving US aircraft carriers into regions does not offer any security from China. All it does, is sit there, look good and let China do what it wants because the US President seems totally, madly in love with China. Even his administration is filled with people who have ties to the CCP.

Since Biden has taken seat in the Oval Office, India, Japan, the states in the Indian Ocean Region, Australia, ASEAN states and even Taiwan has increased calls for support among each other. In essence, these states understand Biden’s actual policies and have seen through the optics. In Biden, they do not trust.