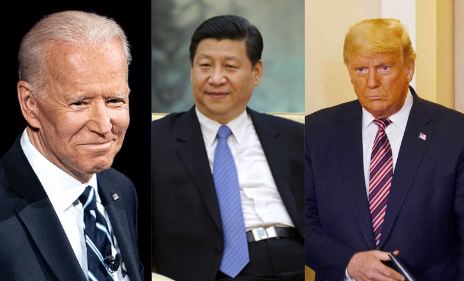 With Donald Trump out of the White House, China has returned to its old bullying habits. On Friday, Taiwan accused China of ‘bullying’ and ‘suppression’ after Guyana terminated an agreement with Taipei to set up an office in the South American country.

Taiwan’s foreign ministry, on Thursday, announced it signed an agreement with Guyana to open a Taiwan office – effectively a de facto embassy for the island that China claims as its sovereign territory with no right to diplomatic ties.

But Guyana’s foreign ministry said later on the same day that it was cutting back the agreement and continuing to stick to the “One-China”policy.

Guyana issued a statement which read, “The government has not established any diplomatic ties or relations with Taiwan and as a result of the miscommunication of the agreement signed, this agreement has since been terminated.”

After the news of the agreement was made public by Taiwan, Chinese Foreign Ministry spokesperson Wang Webin, responded to the move. He said that Beijing hopes that Guyana does not engage in official ties with Taiwan, calling on the country to “earnestly take steps to correct their mistake.”

Wang added, “We hope the relevant party will abide by the one-China principle, refrain from any form of official exchanges and establishment of official institutions with Taiwan, take concrete actions to correct the error and eliminate the negative effects.

Just a few hours after the statement of Chinese Ministry, Guyana scuppered the deal and “corrected its mistake.”

After Guyana terminated the agreement, Taiwan accused China of “bullying” and “suppression.” Taiwan foreign ministry said Guyana’s decision was regrettable and denounced China for bullying. It said, “We condemn the strongest terms the Chinese government’s bullying and suppression of Taiwan’s international space.”

China bullying Guyana into cancelling the agreement comes at the heels of Xi Jinping’s address at the World Economic Forum where he said, “the strong should not bully the weak.”

Since Biden has come to power, China has been using every trick in its book to suppress and bully Taiwan. It does so, without repercussions as Biden refuses to take decisions and meaningful actions.

Donald Trump’s tenure was marked with a constant distaste for China and its belligerent diplomatic activities. Trump had justifiably used American soft and hard power to limit China’s influence in several regions of the world. As Joe Biden ascended the Presidency, China celebrated as if a member of the Chinese politburo was now occupying the White House. Since then, China has started to reimpose itself as Biden constantly tows the Chinese line. With a number of reversals on Trump’s anti-China policies, it’s no surprise that China has become emboldened in its approach and has returned to its old ways of bullying.

For a long time, the United States has been worried about the growing Chinese influence in Latin America. Guyana presented a chance for the US to deliver a dent but Biden has refused to act. This solidifies the claim that Biden’s China policy would be softer, less strict and will focus on engaging with China rather than containing its belligerent diplomacy.