Miles away from Jinping’s “extreme poverty eradication claim”: Life in China outside the Chinese big cities 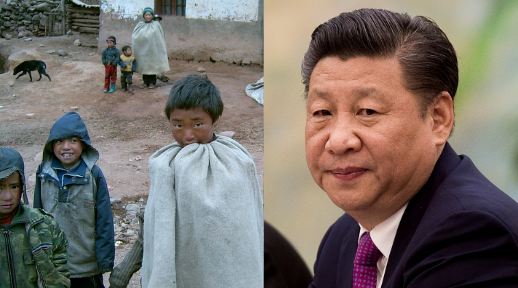 The Chinese Communist Party can achieve what it wants through a mere declaration because the outside world will never come to know if the CCP is not lying and if anyone questions it within China, then the CCP will eliminate the dissenter anyway. Now, Chinese President Xi Jinping is preparing for the CCP’s 100th anniversary on July 1, 2021. And the CCP wants to celebrate a poverty-free China this time.

Yes, Chinese President and CCP General-Secretary Xi Jinping has declared that the Communist nation has achieved the “miracle” of eradicating extreme poverty.

See, if China’s President wants to celebrate the complete eradication of extreme poverty, he is free to do so. But the only problem is that Xi Jinping is lying and Communist China actually remains poor outside of its six super cities– Shanghai, Beijing, Chongqing, Guangzhou, Shenzhen and Tianjin, and some megacities.

The Jinping administration has said that 100 million people have been lifted out of poverty in the last 8 years. The Chinese President himself spoke at a ceremony in Beijing on Thursday. He said that the “arduous task of eradicating extreme poverty has been fulfilled”. He added that it was a “complete victory” that would “go down in history”.

Now, what Xi has said is factually contradicted, because China’s extreme poverty benchmarks themselves are quite dubious. The Communist nation classifies anyone earning more than $620 per annum as ‘not poor’. However, China’s dubious statistics is a debate for another day. Today, we are going to tell you the difference between what China shows and what China doesn’t show.

What does an average tourist going to China see? Or what do the Chinese government and State-owned media try to show? The booming big cities like Shanghai, Guangzhou and Shenzhen, right? You see the skyscrapers, expensive cars and designer clothes shops. This is where China’s economic development has been centred. You look at these images and you feel that this is a rich country.

But China doesn’t show the other side- its rural countryside, where growth has been uneven, or in some cases even non-existent. In 2011, the BBC reported that there is a village called Yihezhuang, which is merely a three hours drive from Beijing. At that time, Yihezhuang’s average income was a mere $157 per year.

You might think that China has changed over the past 10 years, but unfortunately, it is not the case. In 2018, BBC published a video from China’s Sichuan province. It showed how the only way to a remote village on the top of a cliff was a steel ladder.

Well, reaching the village isn’t the only challenge. The people of the village are extremely poor- they live in mud houses and cook on an open fire. They cook corn and potato because this is all that they can afford. It seems that CCP has failed to keep its decades-old promise of uplifting these villages and peasants.

But every villager in China cannot afford corn and potato. It is actually a luxury in the non-descript Chinese villages. Famous YouTube blogger Winston Sterzel, who lived in China for many years, posted a video in which a poor Chinese girl was spotted eating rats for survival. This is the real China that Xi’s CCP doesn’t want you to see.

Another Youtube blogger Mathew Tye encapsulated the astonishing wealth disparity in the Communist nation. He quoted a Peking University study about how 1 per cent of China’s population owns 33 per cent of its wealth. He also explained the regional disparities.

China’s big cities have income levels comparable to first-world countries. But the poorest of China’s provinces like Tibet, which is currently under Chinese military occupation, or Gansu, the income levels are as low as $7000-$9000 per year. This is, of course, comparable to countries that have a serious poverty issue. The wealth gap gets even wider because within the poor provinces, the big cities are comparatively well-off and villages are even poorer.

There are many reasons why China’s villages are poor. The biggest reason is the country’s Maoist Communism. Academicians and economists blame China’s land policy which dates back to the early Communist years. The Chinese government took over farm plots and nationalised them and these plots of land have remained State-owned till now.

Now, the bigger question is if things are going to change? Unfortunately, no. China is unlikely to decentralise control and privatise land because of its Communist roots. Today, Jinping is claiming that China is poverty-free but in 2019, Beijing Orient Agribusiness Consultant- a think tank associated with China’s Agriculture Ministry published a report. The report revealed that China’s rural income has been declining since 2014.

Beijing Orient Agribusiness Consultant concluded that China’s countryside was “returning to poverty” due to trade war with the US and widening urban-rural divide. Interestingly, China was hit by the COVID-19 pandemic in November 2019, which made the Communist nation even poorer.

So, China’s villages are only getting poorer as against Jinping’s claim of ending extreme poverty. China wants you to see the big, booming cities like Shanghai and Beijing. But there is another side, which reeks of destitution and sheer penury.

They lost impeachment trials and their legal suits have no ground, so Democrats begin a witch hunt against Trump, his family and aides