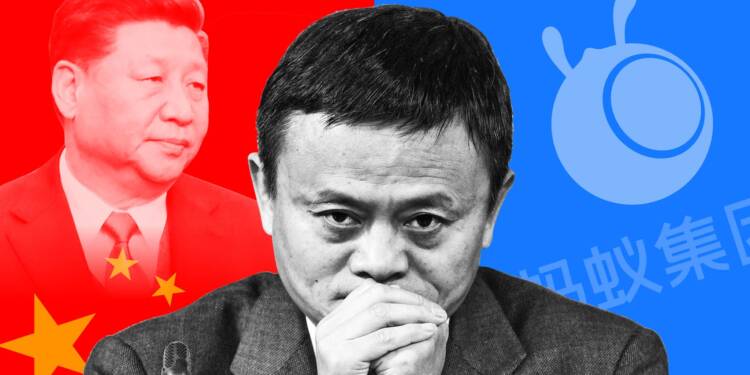 Chinese President Xi Jinping has decided to push for a series of new financial institution bankruptcy laws. These laws will focus on keeping control or rather suppress the companies which are found to be hindering market efficiency. Such “bad apples” like Jack Ma’s Ant group shall be made isolated,  or if needed, uprooted from their very existence. Xi Jinping wants to make sure that no one questions his authority.

The Ant group, led by Jack Ma’s Alibaba group was expected to raise $34.5 billion in October last year. If it would have been successful, it could have been the world’s largest IPO and evaluate the company at a massive $313 billion. But the party took a nasty turn and on the eve of the IPO, the Chinese Communist Party stopped the entire process from moving forward. Since then, Xi Jinping has made it a point to systematically dismantle the Ant Group.

A revision in the newly enacted Bankruptcy laws is urgently needed, according to Guo Xinming, the head of the People’s Bank of China (PBOC), the Nanjing branch and an NPC delegate. Guo said in a written response to Reuter’s questions that without such laws to deal with distressed banks or other financial institutions deemed “bad apples” would continue to stymie market performance. This law could also be seen as a tool to be used by Xi Jinping to cut the wings of big and upcoming firms to stop them from getting bigger than the CCP.

Technically insolvent companies have been unable to exit the market due to the lack of a legal bankruptcy process for Chinese financial institutions.

“Some institutions may have exited from the market on paper but, in fact, it is difficult for them to write off debts in a timely and effective way, which creates hidden dangers that will ‘ferment’ and become future risk events,” he said. This new bankruptcy law came at a time when Xi Jinping is hell-bent on destroying the Ant Group through regulation, legislation and investigations.

Xi Jinping’s recent rolling out of the new banking regulations laws will directly attack the leftover ambitions of the Ant group. The new financial rules which were announced by China’s financial industry watchdog is going to disturb the micro-lending model of the Ant group. On papers, these regulations are for strengthening the bank’s risk management system. But in reality, it will suffocate the Ant group’s primary revenue sources which are small businesses sprinkled across all the country. This decision of the Communist nation is to restrict the number of banks a single financial technology company like Ant can partner with. Xi Jinping’s anti-trust probes against the technology sector are causing unprecedented stock market losses for Chinese companies.

It was speculated that Chinese President Xi Jinping was personally involved in stopping the Initial public offering of the Ant Group after Jack Ma infuriated the government leaders. This entire embarrassment fiasco for Jack Ma was not the product of a single instance, but it was the culmination of years worth of tense relations between Jack Ma and the government because of his increasing footprints.

Ma’s rapid growth from humble beginnings and the control he has over the digital payment sector in China has been seen as the major cause of worry for the Chinese government. His potential to challenge Xi’s authority poses as the greatest threat to the soft ego of Xi Jinping.

The threat to Ma’s ambitions grew graver last October when he criticised China’s regulators at a major conference in Shanghai. He blamed the existing system of the country and questioned the authorities on their repeated attempts to choke the innovation and publicly called the country’s banks mere “pawnshops”. This questioned Xi Jinping’s authority and placed him in the bad books of the CCP.

Jack Ma was once the personification of the Chinese dream. Party favoured him over others because of his likeable and flamboyant personality. He represented a version of China that the Party’s Propaganda machinery was trying to produce for a very long time. He gave China a tool that it has always lacked, a non-threatening soft power image.

The result of Ma’s bravado was seen very soon. The Ant officials and Jack Ma were summoned by the government regulators who in turn halted the IPO of Ant Group. The regulators even went on to scrutinise Alibaba which now faces anti-trust investigations. Ma also vanished from the public sight for almost three months.

This all indicates that even though the tech tycoons, who often are the face of China’s glamorous growth, are not allowed to criticise the actions of the Chinese Communist Party. If the individuals or companies reach for that inaccessible high so they can challenge the party’s authority, they will be systematically dismantled and their owners will most likely disappear forever. In short, no individual or company can ever be bigger than the Party.

It is quite clear now that the Chinese government is increasing its pressure on the country’s technology moguls every day. There would not be another Jack Ma in China and with the new bankruptcy laws, Xi Jinping will make sure that the demise is quick and effective.