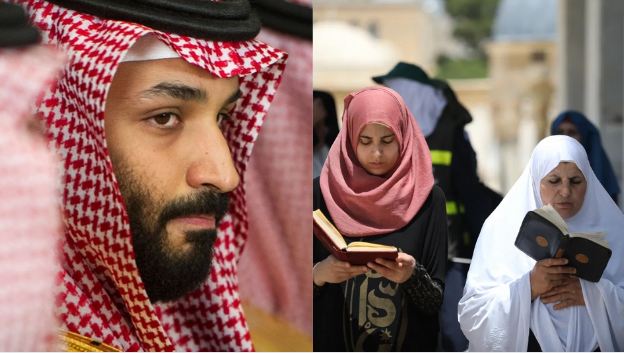 Saudi Arabia has prohibited its men from marrying women from Pakistan, Bangladesh, Chad and Myanmar. The step is intended to discourage Saudi men from marrying foreigners, and additional formalities have been imposed prior to granting permission for marriage with foreigners. The step is to ensure Arab’s racial superiority as Saudi Arabia are looking to prohibit Arab people from intertwining with converted Muslims.

Unofficial estimates put the number of women from these four countries in the kingdom at about 500,000. Saudi men, who want to marry foreigners, now have to face tighter laws, according to a Makkah daily article quoting Makkah Police Director Major General Assaf Al-Qurashi.

The step is intended to prevent Saudi men from marrying foreigners, and additional formalities have been introduced prior to granting permission for marriage with foreigners. Those who want to marry foreign women must first obtain the government’s permission and then send marriage applications through official channels, according to Qurashi.

Read More: Ever since MBS came to power, Saudi Arabia has suddenly started looking like a nation with astute diplomatic skills

Divorced men, according to Qurashi, would not be able to apply within six months of their divorce.

According to the official, applicants must be over the age of 25 and have identification documents signed by the local district mayor, as well as all other identity documents, including a copy of his family card. “If the applicant is already married, he could attach a hospital report showing that his wife is disabled, has a chronic illness, or is sterile,” he said.

This move increases the bureaucratic red tape on the marriage of Saudi men with foreigners, it is aimed to protect the pure race Arabs from intertwining with converted Muslims.

The Kingdom already has strict controls regulating marriage between Saudi citizens and foreigners.

Many Saudis are forbidden by the previous law from marrying non-Saudis. They include government ministers and senior staff in the 14th and 15th ranks; members of the judiciary or the Board of Complaints, as well as notaries public; staff of the Royal Court and the Council of Ministers, as well as members of the Shoura Council; Ministry of Foreign Affairs employees, whether diplomatic or administrative, including those working outside the Kingdom; and Saudis studying abroad, regardless of their nationality.

The prohibition also applies to Saudis in the military sector, such as members of the armed forces, the National Guard, and internal security forces, including general intelligence staff, whether military or civilian; employees of the Ministry of Defense and Aviation, the Ministry of Interior and the National Guard; and members of the Investigation and Public Prosecution Authority.

Read More: High on support by Biden, Iran is poking both Saudi Arabia and Israel at the same time but a terrible fate awaits it

Arabs have had a strong impact on these non-Arabic Muslims. The Qur’an was written in Arabic, and regarded by Muslims as truly the Qur’an only in the Arabic language. Muslim prayers are recited five times a day in Arabic, whether the worshipper knows Arabic or not. Many of the authoritative source texts for Islamic jurisprudence, including the Hadith, were written in Arabic. Southeast Asian Muslims who do not speak Arabic give Arabic name to their children. As a result of which an ideology of Arab racial supremacy is embedded in Saudi Arabia.

Converted Muslims in these countries have been increasingly migrating to the Saudi kingdom on the pretext of marriage. Saudi Arabian are pure race Arabs and wish to protect their pure race identity. Thus, the law that has been pass is a signal of intent by the kingdom that mixed-race will be discouraged and perhaps a propagation of pure Arab identity is also on the cards.

Truckers are one of the most hard-working people in America and Biden’s Green energy push has broken their backs.