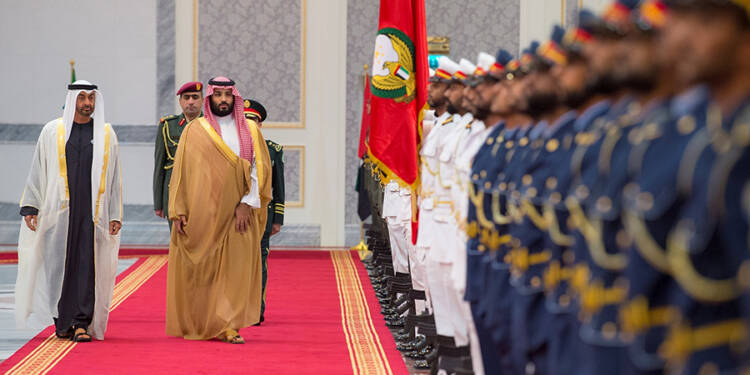 The world is looking at QUAD as the next big thing in geopolitics. But an equally big alliance of four nations is making major inroads in an entirely different part of the world. We are talking about a quartet comprising the Arab nations of Bahrain, UAE, Saudi Arabia and the Jewish state of Israel, which is gaining a foothold in the Middle East and becoming a power to reckon with.

Let’s understand how these four countries are together forming an extremely powerful bloc that aspires to become a power centre independent of the policy directions of the USA, China or Russia.

The Middle East is currently divided into three broad Muslim blocs, one led by Saudi, and the other two by Iran and Turkey respectively. Israel is the only non-Muslim power in the region and remains particularly hostile towards Iran. Turkey, on the other hand, is an emerging security threat for the Jewish nation. But the bonhomie between Arabs and Israel is the real force defining the emerging patterns in the Middle East.

In fact, the Israel-Arab alliance is an innovative solution for many of the regional and political challenges that Israel and the Arab powers face. They are together forming a joint front against common enemies and threats like Turkey and Iran. At the same time, the quartet is showing that they can effectively handle the uncertainty that Biden’s Presidency in the White House is creating.

For Israel, the benefits are somewhat apparent. Yoel Guzansky, a senior research fellow at Israel’s Institute for National Security Studies, told Foreign Policy, “Israel is getting legitimacy, a kosher stamp if you like, from the Gulf.” Guzansky added, “Israel is now in the Gulf. It does not have to hide like it used to.”

In fact, Israel also benefits from the alliance, because it has realised that friendship with Arabs helps it in undermining the Palestinian cause. This is also the reason why Biden’s attempts to rake up the anachronistic issue hasn’t gained much traction.

As for the Arabs, relationship with Israel is a unique method to rein in Iran, which challenges the theological supremacy of the Arabs. At the same time, it helps Saudi Arabia’s de facto ruler Mohammed bin Salman in overwhelming the pressure that US President Biden is exerting over the killing of Saudi dissident journalist Jamal Khashoggi. Even generally, Biden is trying to weaponise allegations of human rights violations in Saudi Arabia, the UAE and Egypt.

Guzansky said, “Tense relations between Washington and Riyadh are leading to a new quartet—Israel, Saudi Arabia, UAE, and Bahrain. We might see them get closer whilst Biden runs the White House.”

Now, the relationship between Arabs and Israel works out in such a manner that Biden cannot go too far in hurting Mohammed bin Salman or other Arab leaders, because Israel is ready to stand up for its new friends. At the same time, Biden cannot really isolate Israel’s PM Benjamin Netanyahu or render explicit support to Palestine, because Arabs are also ready to resist American pressure along with Israel.

For the Biden administration, the Arab-Israel relationship is a hard nut to crack. If Biden annoys any of the four allies, he risks losing all of the American allies in the Middle East in one go. Despite all his personal biases and prejudices, he is compelled to respect the formidable character of the Israel-Arab alliance.

And as for Iran, Arabs and Israel are ensuring that Tehran isn’t able to strike a nuclear deal with Biden and revive the Joint Comprehensive Plan of Action (JCPOA).

Finally, as for Turkey, Israel is hostile towards Ankara because of its support for Hamas. On the other hand, the Saudi bloc detests Turkey’s brand of political Islam and its support for radicals like the Muslim Brotherhood. Together, Arabs and Israel want to decapitate such powers that support pro-Palestine organisations or challenge the Saudi leadership of the Muslim world.

With the Abraham Accords, the Arabs and Israel are getting together into a formal alliance of sorts. The upcoming quartet between the Arab nations and Israel is helping these countries counter the regional, geopolitical and external challenges common to all of them. Arab countries are forming a bloc with Israel, which is perhaps the most powerful in the world.

H&M angered Vietnamese to please the Chinese. Now they are being boycotted in Vietnam too

To take down Florida governor DeSantis and please its Democrat handlers, CBS has come up with a heavily edited video clip