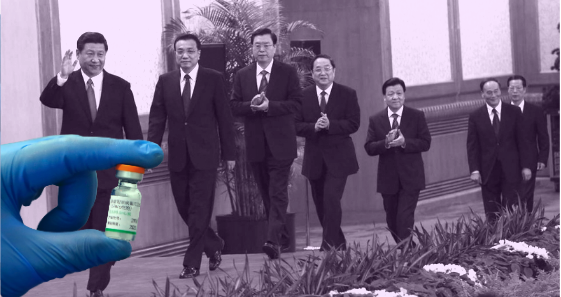 The Communist regime has been pushing its domestic vaccines both at home and overseas, sending free doses to 69 countries and celebrating a milestone of 100 million doses delivered across China by the end of March. Gao Fu, the director of China’s Centre for Disease Control and Prevention, recently told state media that the country’s goal was to vaccinate 70 to 80 per cent of the population in order to gain herd immunity. However, when it comes to the members and top brass of the Chinese Communist Party, they are making all sorts of excuses to not get vaccinated and it’s hilarious.

Fifty government officers and those with the local judicial office and law enforcement gave reasons such as underlying illness, allergy, pregnancy, recent surgery or a cold, according to a March 29 chart that summarizes the region’s vaccination efforts. Allergy stood out as the top reason, cited 22 times. Twenty people also cited high blood pressure, while five mentioned diabetes, even though both are chronic diseases that would mark them as highly vulnerable to the CCP (Chinese Communist Party) virus.

Just four members of the 56-member Housing and Urban-Rural Development Bureau in Tai’an County, which has authority over the area, agreed to be inoculated, with three others citing “bad health.” One person reported toothache in the county’s political and legal affairs committee, a well-funded CCP organ with direct supervision over the court system. Some people said they were taking Chinese medicine or had unidentified illnesses at Tai’an’s fiscal support centre.

China declared earlier that it would ease travel restrictions for foreign nationals who have been inoculated with China-made Covid-19 vaccines, in a step towards normalising international travel. According to an official transcript, vaccinated passengers travelling to China by air would still be required to show negative tests as required by current regulations. This was a last-ditch attempt by Xi Jinping to revive China’s vaccine market which has otherwise failed to produce results. Chinese vaccine diplomacy has also failed big time as countries are choosing American or India made vaccines. Those states which had previously opted for Chinese vaccines refuse to inoculate their citizens with Chinese vaccines.

On one hand, the Chinese Communist Party is trying its level best to make sure its vaccines are welcomed the world over and is making attempts to inoculate the domestic population too. But, when it comes to their very party functionaries and top brass, they are making all sorts of lame excuses to avoid taking the Chinese vaccines. This is creating further scepticism among the common population and they too are losing their confidence in the vaccines.