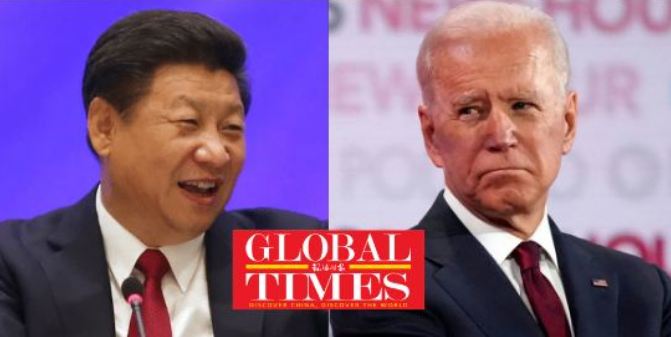 What is Biden’s China policy? Well, the whole world is confused yet the paper dragon seems to have an answer. Global Times, which functions as the mouthpiece of the Chinese Communist Party (CCP), has gleefully decoded the Biden administration’s China policy. And the message coming from Global Times is clear- Biden’s tough talk is meant only for domestic consumption in the United States of America and in deeds, he is functioning as China’s friend.

What the Global Times editorial shows is that China understands how Biden is moved by domestic political compulsions to criticise China or do things like labelling its actions in Xinjiang a “genocide”. Yet, in its pith and substance, the Biden administration is nothing like the Trump administration on the China front.

Overall, the Jinping administration is jubilant about how Biden is not really taking Trump’s anti-Beijing legacy forward, and as such strategic circles within China also notice how the US Secretary of State Antony Blinken admits that the US cannot avoid cooperation with China. Global Times also noted, “Biden administration shows willingness in finding some common ground for cooperation, which could be a good starting point.”

That being said, the celebratory mood in the Global Times coverage about the Biden administration’s China policy reflects how the CCP mouthpiece is declaring that Beijing has the American President in its grip. This is meant to please the domestic Chinese audience as well as declare to the world at large that the White House is actually working with China.

What the Global Times is saying actually finds empirical evidence. Biden has, by and large, allowed China to exert more influence than the latter exercised in the Trump era. Take, for instance, the Indo-Pacific region and the South China Sea disputes. Biden has let the paper dragon exercise more coercion in the hotly contested South China Sea region, even as the US military plays a mute spectator in face of China’s salami-slicing tactics against the Philippines.

As for the Indo-Pacific, Biden is doing everything in his control to placate China. The US Seventh Fleet even violated India’s maritime sovereignty in order to take the focus away from Freedom of Navigation Operations (FOPNOPs) in the South China Sea region.

Biden offers many breathers, reprieves and generous gifts to the Chinese Communist Party (CCP) and its General Secretary Xi Jinping. During the Alaska summit, for example, the Biden administration allowed Chinese officials to humiliate the American delegation. Speaking tough against an American delegation is exactly the kind of publicity that the CCP was looking for at a time when its popularity is waning within China and the Communist Party is actually facing a survival threat.

Even in other theatres like Taiwan and the Korean Peninsula, Biden is allowing the paper dragon to become more influential. By not facilitating a dialogue with North Korea, Biden is forcing Seoul to land in China’s lap and pursue a diplomatic solution in consultation with Pyongyang.

Similarly, Biden is letting it have its way with Taiwan. Beijing is looking to constantly bully the island nation of Taiwan in line with its ‘one China policy’ but Biden is simply not going beyond the exercise of restraint.

As Global Times gleefully decoded, Biden’s policy is simple. He will speak tough on China so that the domestic audience thinks that their President is going to act, but will go soft on it in reality, by moving into a state of inertia at the ground level. And Jinping cannot help but celebrate how Biden is letting Beijing throw mud at the face of Americans.