China is trying to be a major space power, but its irresponsible third-world tech poses a great danger to the world 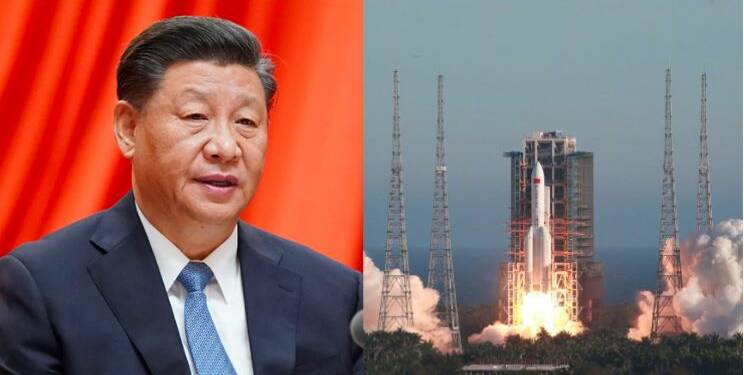 China’s third-grade space programme and the rather trashy technology and equipment that it uses in order to fulfil its dreams of space domination in the foreseeable future have always posed a grave threat to the world community. In the latest news, China is once again becoming a cause of concern for many countries around the world, as a part of a huge rocket launched by the paper dragon on April 29 gets ready to make an uncontrolled entry into the earth’s atmosphere and impact possibly inhabited regions – a development which could prove to be fatal for many.

The part of the rocket which is expected to make an uncontrolled entry this weekend is part of China’s first module for its Tianhe space station. The 30-metre-high core of the Long March 5B rocket launched the “Heavenly Harmony” unmanned core module into low Earth orbit on 29 April from Wenchang in China’s Hainan province. The Long March 5B then itself entered a temporary orbit, setting the stage for one of the largest ever uncontrolled re-entries, the Guardian reported. Interestingly, this part of the rocket weighs over 21 tonnes, and experts are calling out China’s negligence on the matter.

Since 1990, nothing over 10 tonnes has been deliberately left in orbit to re-enter uncontrolled. Based on its current orbit, the rocket is passing over Earth as far north as New York, Madrid and Beijing and as far south as southern Chile and Wellington, New Zealand, and could make its re-entry at any point within this area. Jonathan McDowell, Astrophysicist at the Astrophysics Center at Harvard University said, “It’s potentially not good…Last time they launched a Long March 5B rocket they ended up with big long rods of metal flying through the sky and damaging several buildings in the Ivory Coast.”

On May 5, 2020, parts of China’s Long March 5B had fallen onto at least two villages in the Ivory Coast, following an uncontrolled re-entry of the rocket’s core stage. Then too, the rocket’s core stage weighed over 18 tonnes. Local reports quoted by Forbes suggested the pipe fell on a cheesemaker’s building in the Mahounou village in the Bocanda region and on a house in a village called N’guinou had also been damaged by falling debris. In 2018, an early prototype of the space station China is building also fell back to Earth uncontrolled. It fell over the uninhabited South Pacific Ocean.

Once again, China’s amateur and technically retarded space programme poses a danger to humanity. The rocket stage measures about 100 feet long and 16 feet wide. If it falls out of orbit, it may burn up in Earth’s atmosphere, but large chunks of debris could survive the fall. The world community must step up and call out China and force it to abandon its lethal space programme which keeps leading to rocket parts making uncontrolled entries into the earth’s atmosphere and endangering lives.

China plans to build its own space station, which is expected to be completed in late 2022. The rocket launch on April 29 was the first among 10 other planned launches. If the first one itself has proven to be such a danger for the world, one can only guess how China will be unable to dispose of the rocket bodies from the next 10 launches.

As far as the Taiwan question is concerned, the Biden administration has surrendered before Beijing