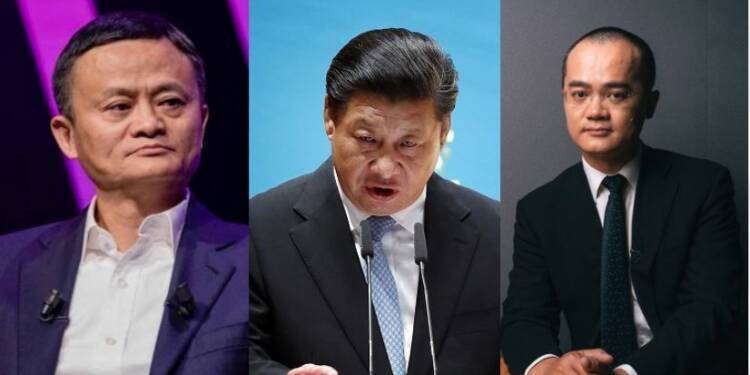 The Chinese Communist Party (CCP) is a bizarre, paranoid and insecure regime. It fears many things which a democratic government would hardly consider a threat. So, the CCP fears things like human rights activists, religious and ethnic minorities, pro-democracy activists and even a hint of criticism. But Xi Jinping, the incumbent Chinese President, is absurd even by the standard of the CCP. He fears things like poems and billionaire CEOs.

The issue is that Chinese business leaders, who were once seen as CCP loyalists, have suddenly started criticising the Chinese government quite openly. Last year, Alibaba founder Jack Ma criticised Chinese regulators, and now, Wang Xing, the co-founder of a Chinese food delivery giant Meituan, posted a poem on social media, which was interpreted by outsiders as a veiled criticism of the Xi Jinping administration. This officially marks a bitter feud between Jinping and big Chinese businesses.

The next thing we know, Ant Group Co.’s record stock listing worth $37 billion got stalled. The Jinping-Ma showdown escalated quickly. China’s State Administration for Market Regulation (SAMR) also launched an anti-monopoly probe against Alibaba. To top it all, Ma went missing briefly after the apparent battle between the Jinping administration and China’s most popular billionaire.

However, there is a twist in the tale. The Alibaba founder didn’t give up. In April, the star billionaire was spotted in a video conference between the Russian Geographical Society and Vladimir Putin. Ma flexed his muscles by flaunting his connections with the “Shanghai faction”. To be precise, “Shanghai faction” is a powerful group within the CCP, which maintains close ties with billionaire entrepreneurs like Jack Ma, as well as a healthy relationship with Russian President Vladimir Putin.

Ma’s sudden appearance in the video conference was thus a show of defiance against Jinping’s high handedness. His actions seem to be inspiring other successful Chinese entrepreneurs as well.

Take for example – Meituan. The food delivery giant is facing an anti-trust investigation by China’s State Administration for Market Regulation (SAMR) since April 26 last month over “suspected monopolistic practices”. This is only the second such anti-trust investigation into a domestic tech company by China. Alibaba, the first victim of such proof, was fined $2.8 billion by Beijing.

The food delivery giant is already suffering because of the probe and Chinese President Xi Jinping’s insecure behaviour. The company has witnessed a drastic fall of $38.96 billion in its value over the past two weeks, which must be causing understandable anguish.

Meituan CEO Wang Xing meanwhile posted a poem on social media on May 6, which narrated the story of an ancient emperor who burned books to silence intellectuals. But guess what? His reign was overthrown by two uneducated people. Can you guess who took this social media post personally? Well, let us give a clue – it could have been an expressionless guy sitting in Zhongnanhai, Beijing.

Xing soon realised that narrating a poetic coup story on Chinese social media was probably not a good idea. So, he deleted the post on May 9. Wang also issued a clarification. As per CNBC, he said, “This (poem) reminds me that the most dangerous rivals are usually not those you expect. Alibaba has been watching JD.com for a long time. In the end, it was Pinduoduo who came from nowhere and competed with Taobao.”

Yet, Xing’s clarification was too little, too late for China’s autocratic regime. As per CNBC, the misunderstood poem has spurred further scrutiny against Meituan. Shanghai Consumer Council, a consumer rights group, too mounted pressure on Meituan by criticising the food delivery giant over its business practices.

However, the way the Chinese President and his regime got rattled by an innocuous poem speaks for itself. Xi Jinping is too small a leader to digest the opinions of China’s business leaders. The battle between Jinping and Chinese entrepreneurs has thus begun, and this time, it seems that Chinese businesses don’t fear Beijing’s high-handedness.