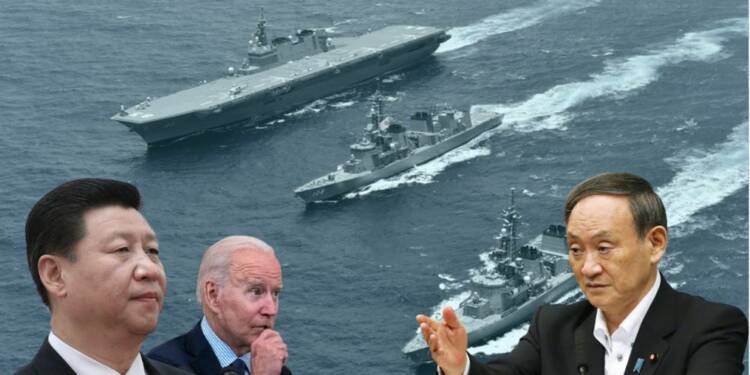 In a historic move which is bound to scare China to its meek bones, Japanese Defence Minister Nobuo Kishi has announced that his country will be hiking its military budget, notwithstanding the 1 per cent share of GDP cap which Japan has strictly adhered to. What this means is that Japan will now be breaching the 1 per cent of GDP cap which it has put on itself in terms of defence spending. This would allow Tokyo to tremendously bolster its defence capabilities, although Nobuo Kishi also mentioned that the focus would also be towards increasing Japan’s offensive capabilities.

Since the 1990s, Japan has kept its defence spending below 1 per cent of its GDP. With the Defense Minister now saying that the 1 per cent of GDP cap will no longer be paid heed to, Japan has effectively sent across a signal to not just China, but also Joe Biden.

Speaking to Nikkei Asia, the Japanese Defence Minister said, “We must increase our defence capabilities at a radically different pace than in the past,” considering China’s increased capabilities, as well as new areas of warfare such as space, cyber and electromagnetics. Nobuo Kishi was also quoted as saying, “We will properly allocate the funding we need to protect our nation” without considering outlays in relation to GDP.

Since the 1990s, the only year that Japan’s defence spending exceeded 1 per cent of GDP was fiscal 2010, when GDP plummeted after the global financial crisis. According to The Nikkei, Japan’s defence budget has grown for nine straight years through fiscal 2021 but has remained below 1 per cent of GDP. The intentional breaching of the 1 per cent mark is being called a turning point for Japan’s security policy.

Read more: Japan has truly come out of the shadows of pacifism as it moves towards becoming a major defence exporter

While the move will most definitely irk China and help Japan bolster its defence capabilities in face of growing Chinese belligerence in the East China Sea and the South China Sea, the announcement of increasing Japan’s defence spending by leaps and bounds will also be a message to the Biden administration that Tokyo is going to stand on its feet to defend itself, and not depend on the United States.

A clear indicator of Japan’s discomfort with its dependence on the United States for its defence was given by Nobuo Kishi when he told Nikkei Asia that Japan, by hiking its defence spending over the per cent GDP share mark will seek to strengthen its capabilities on the Nansei Islands. The Nansei Island chain stretches from the southernmost tip of Kyushu to the north of Taiwan and consists of small islands such as Osumi, Tokara, Amami, Okinawa, Miyako and Yaeyama.

The Nansei Island chain is absolutely crucial for Japan to heavily militarise since they are to be used in the defence of not just the Senkaku Islands, but also the Miyako Strait and subsequently, the protection of Taiwan. Although the United States of America has a military base at Okinawa, which forms a part of the Nansei island chain, the Biden administration has been looking to disperse its troops across the Indo-Pacific, which would mean pulling out boots from Okinawa.

Therefore, at a time when Joe Biden is actively trying to pull out American troops from Okinawa, Japan has realised that it must spend much more on its military in order to defend itself independently. Apart from inevitably hiking Japan’s defence spending, Nobuo Kishi also pushed for a Quad defence ministers’ meet soon. It must be remembered that Joe Biden has been trying to dilute Quad with his climate vigilantism and non-China specific issues. At such a time, Japan’s push for a Quad meet when it is about to hike its defence budget indeed comes as a direct message to the Biden administration.

Japan’s last defence budget witnessed a record high of worth US$51.7 billion and was aimed at overpowering China. And Japan isn’t just going to produce conventional weapons. It is going to develop a remote-controlled, pilotless aircraft ready for deployment by 2035. Japan will also invest heavily in making its offensive military capabilities independent of direct human involvement, which will allow the country to take on China without having to lose precious lives.

At a time when Joe Biden is giving China a free pass to do as it fancies, Japan under Prime Minister Yoshihide Suga is fundamentally changing its security outlook. The message to the Biden administration is clear – Japan is readying its capabilities to take on China alone, if that situation were to ever arise.