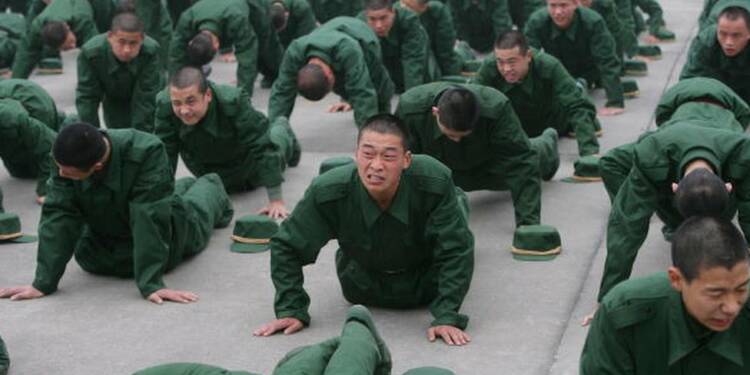 The desperation in any army is apparent when they are forced to decrease the criteria for the entry into their ranks, and from the current developments in China, it is clear as the sky, given that the People’s Liberation Army is facing a human resource drought, with the decreasing youth population becoming a major social issue. China is inducting hiring men with weak eyesight and physical ailments into the PLA because there aren’t many to choose from.

The PLA has been looking for more educated recruits, but it has had to cast a wider net to get the numbers it requires. The People’s Liberation Army, being the world’s largest military and in need of hundreds of thousands of new recruits each year, has been affected by China’s wider fertility and ageing concerns, and has attempted to address them by decreasing the criteria for entry. It shows poorly of a country that is the size of China which is not able to find the required number of eligible and able citizens for their PLA.

In November and December 2020, China conducted its seventh national population census, gathering a vast amount of personal and household data, including the age, education, occupation, marital status, and migration status of people living in the world’s most populous nation. While China’s population continued to rise last year, reaching 1.412 billion in 2020, the number of new births plummeted to a 60-year low of 12 million in 2020, according to the census. Due to the high cost of child-rearing, a more mobile workforce, and a desire for personal independence, Chinese couples are delaying or totally postponing having children.

The gathering pace of the PLA’s modernisation has given its instructors and recruiters the challenge of how to train a newer breed of soldier, experts told SCMP. “Military instructors found the strict and dogmatic training modes applied in the last century didn’t work for the more individual young soldiers born in the 21st century,” said Zhou Chenming, a researcher from the Beijing-based Yuan Wang military science and technology think tank.

China, under Xi Jinping, finds itself in a very tough spot. Contrary to the claims of the CCP General Secretary, China is nowhere near where the CCP tells the Chinese people it is. Instead, it is lagging in a rather shameful manner. In the past year, China has hit the global headlines at an unprecedented pace – courtesy of its culpability in spreading a deadly disease around the world.

This coverage of China and heightened global interest towards the paper dragon has brought to light a near fact – that the Middle Kingdom is about to implode very soon. Add to this the fact that China is not even able to find the necessary amount of able bodied souls to fill the ranks of its PLA, things can go out of hand at any moment.

In addition to the problems in the country and the discontent among the citizens, the military is also finding it hard to keep its rank and file in order. As per the SCMP report, “Some even dared to butt against and challenge superiors when they were not happy. The military was forced to adjust. Some military instructors tell me they are still muddling through how to take charge of younger generations.” All of this goes on to show that the PLA on the one hand is not able to find new worthy recruits and on the other hand is not able to keep its existing soldiers in check.