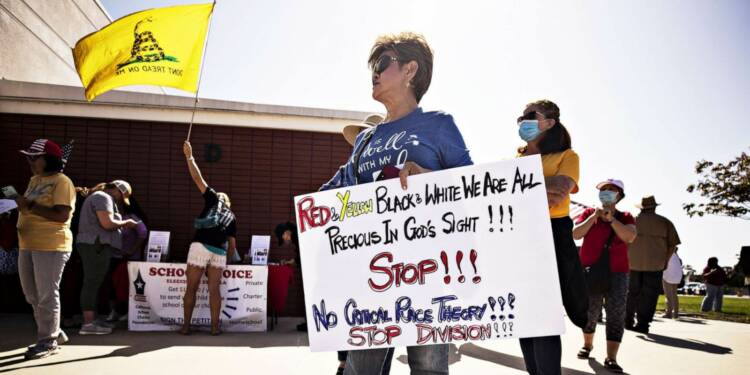 In the United States, the Critical Race Theory has been pushed down the throats of normal American citizens all over the country. The agents of the left liberal, big or small, have been inoculating the citizens with their radical, discriminating and divisive race theory. But now the largest teachers’ union in the US is determined to push the CRT (Critical Race Theory) on children as well as they have determined it to be “reasonable and appropriate” in social studies classes.

The National Education Association has voted to “publicise” the critical race theory and deploy a “team of staffers” to help union members “push back against anti-Critical Race Theory propaganda.” New Business Item 39 also asserts that the union opposes critical race theory prohibitions and the New York Times’ controversial 1619 Project, which has already been adopted in about half of the United States.

Additionally, the resolution calls for the union to “join with Black Lives Matter at School and the Zinn Education Project to call for a rally this year on Oct. 14 — George Floyd’s birthday — as a national day of action to teach lessons about structural racism and oppression.”

The third paragraph pledges to accomplish the following:

“Publicly (through existing media) convey its support for the accurate and honest teaching of social studies topics, including truthful and age-appropriate accountings of unpleasant aspects of American history, such as slavery, and the oppression and discrimination of Indigenous, Black, Brown, and other peoples of color, as well as the continued impact this history has on our current society. The Association will further convey that in teaching these topics, it is reasonable and appropriate for curriculum to be informed by academic frameworks for understanding and interpreting the impact of the past on current society, including critical race theory.”

Despite the permission, according to a notice on the union’s website; “This item cannot be accomplished with current staff and resources under the proposed Modified 2021-2022 Strategic Plan and Budget. It would cost an additional $127,600.”

Where did this Action came from?

The action comes as school systems throughout the country and liberal commentators have tried to fend off anti-CRT (critical race theory) parents by claiming the curriculum is too complicated for K-12 pupils and should only be taught to graduate students. Despite evidence of critical racial theory seminars being presented to teachers and administrators, as well as examples of CRT-themed subjects being incorporated in some classrooms, this assertion is made.

Conservative lawmakers have already pushed to resist the implementation of CRT (critical race theory) by securing bans against the theory in almost 24 US states. Iowa has declared the theory as “discriminatory indoctrination.” Moreover, parents have resisted the push too, as critical impassioned comments have become a regular at the board meetings.

Read More: ‘Toe my lines or face my wrath,’ Biden has turned the US Military Chief into a puppet

The NEA is the largest teachers union in the US with over 2 million members. To put the numbers in context, there are a total of 3.2 million public school teachers in the enlisted with the US Department of Education up until last year. This means that the NEA has a hold over 62.5% of public school teachers in America who are willing to force the Critical race theory on to kids.

Critics argue that the philosophy is racist in and of itself, encouraging stereotyping and unjustified characterization while focusing on divisiveness and anti-American rhetoric rather than unification and the virtues of the founding documents.