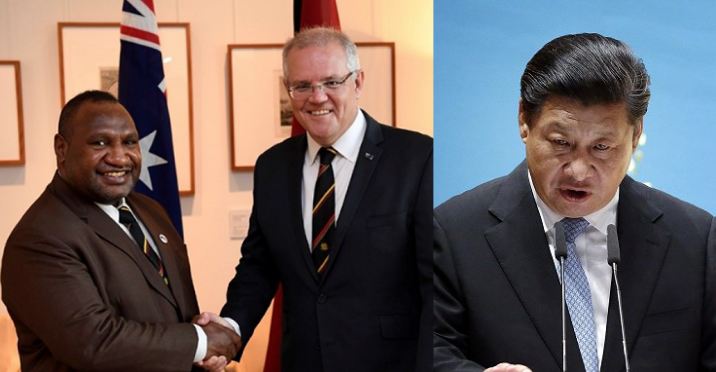 Chinese mouthpiece Global Times has suffered yet another meltdown of epic proportions. This time it is the Australian actions in Papua New Guinea which has been the reason for such a meltdown. In an article titled, “Planting ‘consultants,’ blocking vaccine approval, threatening officials – Australia sabotages China-PNG cooperation by all means,” Global Times outlined how Australia thwarted China’s belligerent advances in the Pacific nation.

Australia has been using its diplomatic heft to sabotage China’s vaccine cooperation with Pacific Island countries, Global Times discovered exclusively from its sources. Despite the fact that China has effectively controlled the epidemic at home, Papua New Guinea still considers China to be a “high risk” country.

In the case of China’s vaccine supply to Papua New Guinea, Australia has taken proactive steps to obstruct the authorisation of Chinese vaccines for emergency use. Back in February, China announced that it would provide vaccines to Papua New Guinea and also provided trial data for the vaccines, but with Australia working in the background, PNG’s epidemic prevention centre did not approve the emergency use of Chinese vaccines until the end of May, after Australia’s vaccines had already arrived in the country.

Global Times goes on about how good it would have been for the Pacific Island states if they had chosen Chinese vaccines to fight against the virus. It says that the post-COVID-19 era would be boosted with China’s leadership.

From being unable to debt trap PNG to being even unable to supply it with its dubious vaccine, China has been kicked out of the Pacific nation and it has Australia and Morrison written all over it.

Last year, TFI reported how China’s plans to debt-trap PNG gloriously failed. Chinese company Huawei had built a National Data Centre with a loan of 53 million dollars from the Export-Import Bank of China. PNG refused to pay back the loans. It was a strategic and diplomatic victory for Australia which set the tone for China-Australia relations.

Morrison saw China obtaining a strategic advantage in the underdeveloped island nation by lending millions of dollars as an early China hawk. Within months of assuming power, he funded a research that proved Huawei had created a flawed data centre that the People’s Liberation Army is using for military purposes. The investigative research was ordered by the Papua New Guinea government in 2019 and was funded by the Australian Department of Foreign Affairs and Trade.

Years before the investigation, China had given billions in soft loans to Papua New Guinea to meet its strategic goals and hence, became the second-largest donor to the island country. As per a report by the premier Australian think tank – Australia Strategic Policy Institute, China has given soft loans worth 147 million dollars for digital projects in PNG, including the money for the data centre and a biometric-based identity card. However, PNG refused to pay back the loans, thus turning China’s investment into a Non-Performing Asset.

As a result, China retaliated but was once again caught red-handed, trying to create a second pandemic in Papua New Guinea. A Chinese state-owned company, the China Metallurgical Group Corporation (MCC), which controls a major nickel mine in Papua New Guinea said that 48 staffers who returned from China, early in August last year, may test positive for COVID-19 because they have been vaccinated. But at the time, no vaccine had been developed not even in China.

Papua New Guinea, backed by Australia, then demanded some tough answers from China over the atrocious development. While China continued to press its claims that the covid cases should be attributed to vaccination, PNG refused to budge and said that Papua New Guinea “does not currently acknowledge a vaccine” for the Chinese virus and has no plans to do so unless a vaccine is approved by health regulators. It has also issued a decree prohibiting Coronavirus testing, trials and vaccine treatments without approval within the Island country.

Again, back in August, last year, TFI reported how PNG had suddenly taken a violent turn against China, its belligerence and its investments including the BRI. Australia had backed PNG diplomatically and became the force behind PNG’s vaccination drive. Australia had even readied a $500 million immunisation package for the  Pacific island nations.

China, through its debt-trap policy, was trying to snare PNG, aiming to build a strategic military base which would have been a major national security threat for Australia. PNG sits just North of Australia and serves as an outpost in the Western Pacific against China. But like China’s other actions in the region to gain influence, this one was also thwarted by Australia and the meltdown of Global Times is a result of the same.

Since the pandemic, the conflict between Australia and China has been extensively documented. China has attempted to punish Australia with unilateral penalties since Australia demanded an open and independent probe into the Coronavirus discovery in Wuhan, but these have all backfired.

China wanted to punish Australia with sky-high tariffs on Australian imports. However, Xi Jinping was unable to grasp the measure of Chinese dependency on Australian coal. As a result, China has been suffering gravely with blackouts and industrial shutdowns due to a lack of power supply, which is leaving the Chinese industry in a ramshackle and a totally dilapidated state.

On the other hand, China has been unable to land a blow in the diplomatic tussle which was started by it. Till now, Australia has thwarted all Chinese advances and has brilliantly used its diplomatic heft to round up allies to counter China and press it on issues that irk China the most, like coronavirus and Xinjiang.