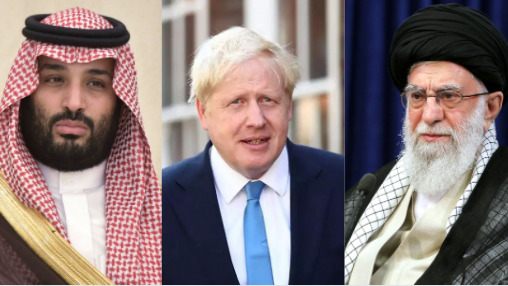 As the USA under Joe Biden has been running away from theaters of conflict and leaving its allies in a highly vulnerable situation, it seems all over the world other capable allies are filling the void. According to Human Rights Watch, British personnel are getting based at Al-Ghaydah airport in the Mahra governorate of eastern Yemen, where Saudi forces oversee a jail camp. Britain, it seems, is secretly helping the Saudis in their war against the Houthis in Yemen.

British forces are thought to have been stationed at the airport for several months. Naser Hakem Abdullah Awidh, a local journalist embedded with the Saudi military at the airport, told Declassified that he has observed British troops there this year. Hameed Zaabnoot, a tribal sheikh who has led sit-in protests against the presence of Saudi forces in Mahra province, told Declassified that staff at Al-Ghaydah airport have seen British troops inside. These things prove the fact that Britain is stepping up at a time when the USA is backing out.

Till now, Saudi Arabia and Iran were contesting for Yemen, a strategically located country in the Middle East. But now, new players are jumping in. Israel seems to have joined the Arabs in the Yemen war, whereas Iran is mobilising its proxies and also trying to bring in Venezuela and Syria. In the final stages of the Yemen war, the Arab-Israeli alliance seems poised to take on Iran and its allies.

For Iran and Saudi Arabia, fighting for Yemen was essentially rooted in a desire to control the crucial chokepoint called Bab-el Mandeb Strait, as a part of their larger geopolitical ambitions. However, Saudi is presently on the backfoot and Iran-backed Houthis have begun to consolidate their position in Yemen. In fact, Saudi’s own security has been imperilled as Houthis keep attacking the Sunni Muslim Kingdom with ballistic missiles and drones at Iran’s behest.

Meanwhile, Israel is becoming actively involved with Saudi Arabia and the United Arab Emirates (UAE) and it seems now, Britain too is going out of its way to help the Saudis in their efforts against Houthis in Yemen.

Read more: Yemen war is about to enter the final stage with Arab-Israeli alliance on one side and Iran and its allies on the other

In an interview in Arabic broadcast late last month by Yemen’s Al-Mahriah TV channel, Britain’s ambassador Michael Aron was repeatedly questioned over allegations that UK forces have been seen in the east of the country. Aron did not deny the allegations, saying, “We support efforts of fighting terrorism and smuggling. This has been our position for a long time,” adding that “we have good and deep relations with the legitimate government”.

In response to the questions regarding the deployment, a MOD spokesperson told Declassified: “The UK is not a member of the Saudi-led coalition and we have played no role in setting Saudi-led coalition policy. The UK’s defence relationship with Saudi Arabia includes training courses, advice and guidance. This supports the efforts of Saudi Arabia to protect national and regional security, as well as their military’s compliance with international humanitarian law.”