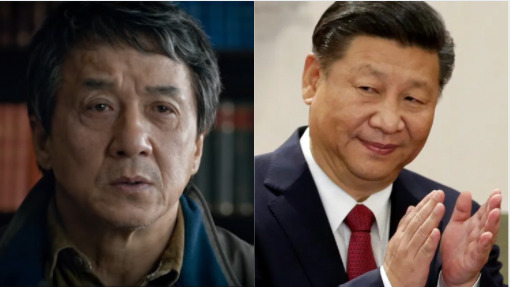 China under Xi Jinping is following the art of war quite literally, being at its most vulnerable, Beijing is trying to act all aggressive and confident to offset the problems. In a speech celebrating Communist Party’s Centennial on July 1, an ostensibly exalted Xi Jinping touted that the party and the people of the country are inseparable. Jinping even roared out that if subjected to bullying at the hands of foreign powers, 1.4 billion Chinese people will forge a steel wall to countervail the hostile forces. However, the confidence of people in the CCP is so low and the situation is so precarious that the Communist Party has to depend upon film stars like Jackie Chan to stop the Chinese citizens renouncing CCP memberships en masse.

As reported by the Chinese Communist Party mouthpiece and propaganda tabloid, Global Times, at a recent forum in Beijing, Hong Kong action film superstar Jackie Chan said he wanted to join the Communist Party of China (CCP), a comment that experts said reflected Hong Kong elites’ increasingly objective and rational understanding of the CPC as the city reflected on its position and sought future development.

On Thursday in Beijing, Jackie Chan attended a symposium that allowed Chinese cinema specialists to speak and express their perspectives on the keynote speech given by China’s top leader on July 1, the CPC’s centennial anniversary.

Jackie Chan, who is also the vice chairman of the China Film Association, acknowledged his pride in being Chinese while also expressing his longing for the CPC at the ceremony. “I recognise the CPC’s greatness, and I believe it will fulfil what it claims and promises in less than a century, if not a few decades,” Jackie Chan added. In addition, he stated, “I want to join the CPC.”

As per a report published in Epoch Times, roughly 25 million CCP members have denounced their party membership since October last year. As of July 6, around 380 million Chinese nationals have done so. The disenchanted members are cutting their ties with the three main CCP affiliated organizations—the Communist Party, Communist Youth League, and Young Pioneers organizations. The development suggests that the Chinese nationals are disowning the world’s largest and richest political party, owing to its detrimental policies back at home and abroad.

Jinping’s ongoing crackdown on the country’s tech sector, his disastrous foreign policy culminating enemies across the globe, the country’s economic perils along with regime’s stringent pandemic policies have pitted the CCP member against their own government. Under Jinping, China stands on the verge of being cornered globally given the country’s poor record of human rights in Hong Kong, Xinjiang, and the autonomous region of Tibet.

Read more: 25 million CCP members quit the party due to coronavirus and a thousand other reasons

TFIGlobal recently reported how Chinese citizens are growing worried about China’s deteriorating relations with Japan and other neighbours. Many Chinese citizens appear to be concerned that the governing party’s aggressive and confrontational stance toward Hong Kong and Taiwan, as well as in the South and East China seas, may pose a severe threat to the country’s neighbours, especially Japan.

The fact that the very people of the country are disenchanted from the Communist regime and are not willing to be a party to the organisation, has made CCP really worried. And now in its act of sudden desperation, it is relying on celebrities like Jackie Chan. However, it will not stop the Chinese people from renouncing CCP membership.