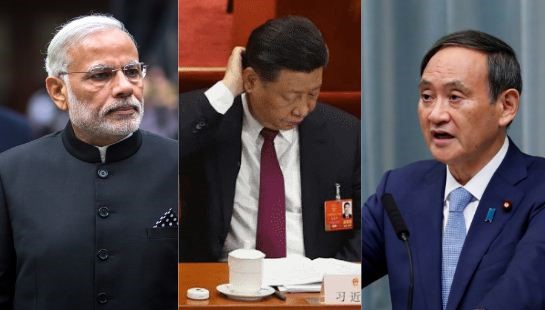 Japan is stepping up its pro-Taiwan activism in the East China Sea. Japan is prepared to militarily defend Taiwan along with the United States if the ruling Chinese buffoons of Beijing try to invade Taiwan and “integrate” it forcefully with the mainland. Recently, Japan even showed Taiwan as an entity separate from China – thereby dumping the “One China” policy for good.

In previous defence white papers, Japan had shown Taiwan as a province of China. Japan’s decision to recognise Taiwan as a free, independent and sovereign country comes in the backdrop of the Yoshihide Suga administration making it abundantly clear that a Chinese invasion of Taiwan will be met with a jawbreaking response.

Now, Japan’s close friend – India is also making some very significant strategic moves to ensure that the Chinese firepower and military force does not get concentrated in and around the East China Sea region. What India is looking for is to grab China by the neck during a two-front conflict facing Beijing. This will ensure that the Chinese forces and armoury are divided into two halves – thereby severely weakening China’s defences on both crucial fronts.

While Japan will be dealing a blow to Chinese plans of invading Taiwan in the East China Sea, India is already sending chills down the spine of Xi Jinping and the wimp-like private militia force he likes to refer to as the Peoples Liberation Army (PLA). In recent news, to counter China on the Himalayan border, an aggressive India under Prime Minister Narendra Modi is gearing up to build four new airports and 37 helipads across the Union Territory of Ladakh – which is currently a hotspot of military tensions between India and China.

Apart from developing a massive air link in Ladakh, India has been working overtime to counter any Chinese threat in the region. In a historic shift last month, at least 50,000 Indian troops were redirected to the northern border with China, taking India’s total troop tally in the region to well over 200,000 — signalling an increase of more than 40 per cent from last year. The number of troops has also been increased along the southern Tibetan plateau, with soldiers equipped with machine guns having joined the retinue of armed paramilitary personnel already stationed there.

Read more: After the Galwan clash last year, India has turned the Indo-Tibetan border into a fortress with 200,000 troops and warships to flank them

According to Bloomberg, the relocation of the Indian Army is geared at offering additional alternatives to strike and conquer territory in China, if necessary, as opposed to prior military deployments that were aimed at stopping Chinese operations. This will also aid in the acclimatisation of additional troops to battle in the Himalayas. Meanwhile, the Indian Navy is also stationing more warships along important sea lanes to investigate energy and economic flows to and from China.

The enhanced Indian infrastructure and troop presence along the border with China will make it impossible for Xi Jinping to direct all necessary forces required to fight a Japan-U.S. military offensive in the East China Sea – which could see China’s plans of invading Taiwan fail magnanimously. China would be forced to keep a large magnitude of its forces stationed on the border with India, as diverting them to fight for Taiwan in the East could give New Delhi a free opportunity to launch an offensive in China-occupied Aksai Chin and Tibet.

Recently, Prime Minister Narendra Modi wished the Dalai Lama on his 86th birthday. This was a direct message to China that India is more than willing to play the Tibet card, and was aimed at antagonising Beijing. Xi Jinping knows that India could do anything in Tibet – which is why he cannot afford to divert even one Chinese little emperor from the border with India to Eastern China.

In any case, the Chinese People’s Liberation Army is full of wimps, sissies and little emperors. TFI had comprehensively explained last year how the Chinese soldiers are, in fact, incapable of fighting the battle-hardened Indian forces – which specialise in mountain warfare. The Indian Army is in a constant state of combat readiness. Whether it be internal security operations in the Kashmir valley or in Northeast India – and of course, the volatile border with Pakistan – the Indian Army is never in a state of rest, as opposed to the PLA, who, in order to keep themselves occupied, play games on the Line of Actual Control (LAC).

China not only has to fight Japan, U.S. and Taiwan in the East, but also has to be prepared for a full-blown conflict with India at the same time. A two-front war will cripple China, not to mention, lead to a humiliating loss for it on both fronts. Unfortunately, China called this hell upon itself, and can no longer escape it.