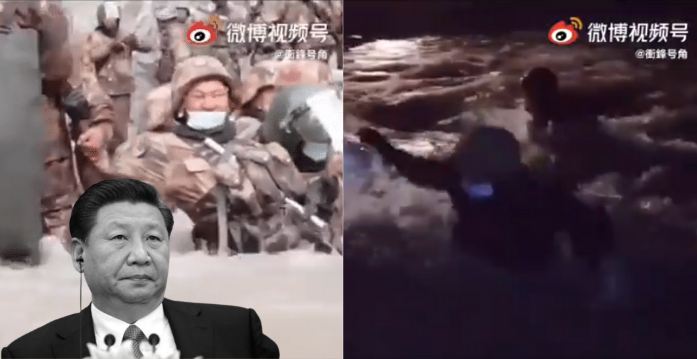 Domestically, anger against the Communist regime is rising in China. Chinese citizens have had just about enough of the CCP’s brutality, lies, propaganda and tyranny. On the Chinese social media network – Weibo, the people of China are not shying away from criticising the CCP, albeit, in a tone so non-dissident that they do not land up in a Chinese jail cell. Still, the odds are heavily stacked against them. After the Galwan Valley clash of June last year, in which India thrashed the living daylights out of Chinese invaders, the people of China have been livid at the CCP.

While India was quick to admit 20 fatalities due to the bloody clash, China – which suffered a much higher quantum of damage chose to cover up the entire clash, pin its blame on India, and hide the reality of dead Chinese soldiers from its people. It was only in February this year – seven months after the clashes took place, that the CCP admitted a meagre four fatalities. Thereupon, as reported by TFI recently, Chinese state media outlets Xinhua News and Global Times reported an additional death due to the clashes, taking the “official toll” to five.

Video Leaked on Chinese Video Site Weibo after 12th Round of Indo-China Talks Claiming Casualties of PLA in Galwan Clash with an Interview of Family member of PLA Trooper K!lled in Clash.
Heavy Water Current can be Seen as unofficially Claimed by Indian Side earlier pic.twitter.com/vhGoAEhJ0t

Video of Galwan clash posted by China, see how Chinese soldier are flowing in stream of river still they accept only 5 casualtypic.twitter.com/h08qek4Lgn

Although the video is part of China’s extravagant propaganda blitzkrieg aimed at proving that India suffered much more casualties than it did, the fact remains that PLA soldiers are seen getting washed away by the furious Galwan stream. Further, hordes of Chinese soldiers are also shown trying to take shelter, along with the injured and dead, in what appears to be a cave or bunker.

Read more: China admits that they were outclassed and thrashed by Indian soldiers in Galwan

The propaganda video released by China on its “PLA Day” inadvertently ends up admitting how China was humiliatingly beaten black and blue by India’s brave armed forces at the Galwan Valley in June last year. It has become a habit of China to come up with post-facto fictitious tales glorifying Chinese soldiers’ so-called heroics against India.

Recently, according to Global Times’ emotional thriller regarding the ‘officially’ acknowledged fifth Chinese soldier who was killed last year, the little emperor led Chinese troops in an assault against India, only to be killed. The report said, “As he saw several soldiers were besieged by the Indian troops, Chen Hongjun, once again, turned around without hesitation and led the soldiers to charge again at the battleground.”

Interestingly, Global Times claims that “India besieged China” at Galwan last year. However, according to the video released by CGTN, the Chinese troops are seen attacking India with stones and other pre-historic weapons from a height. How is it that India “besieged” China from a disadvantageous position? Does it make any sense for somebody to claim that India would “besiege” China, while the PLA has the advantage of the heights? Well, China thinks this fake narrative makes more than sufficient sense, for its domestic audience at least.

Last Saturday, India and China held the 12th round of Corp Commander level talks in the hope of disengaging along the conflict points in Eastern Ladakh. India has made it clear to China that if its patrolling rights are not restored in the Depsang plains of Ladakh, and if the Chinese do not withdraw from the area, the Indian Army will deploy its troops to the Kailash range. The Indian Army is well equipped and fully prepared to deploy its troops to the Kailash range with the aim of rattling China and dominating its crucial infrastructure. China’s Western Highway will be well within the Indian Army’s reach if India decides to augment its strengths at the Kailash range once again.

While China satiates itself with thrilling accounts of events from last year’s clashes and tries to paint a victorious picture for itself falsely, India has been working overtime to counter any Chinese threat in the region. In a historic shift in June, at least 50,000 Indian troops were redirected to the northern border with Tibet, taking India’s total troop tally in the region to well over 200,000 — marking an increase of more than 40 per cent from last year. Therefore, at a time when China is engaging in propaganda which would put Joseph Goebbels to shame, India is getting ready to whack the PLA if they so desire in the foreseeable future.