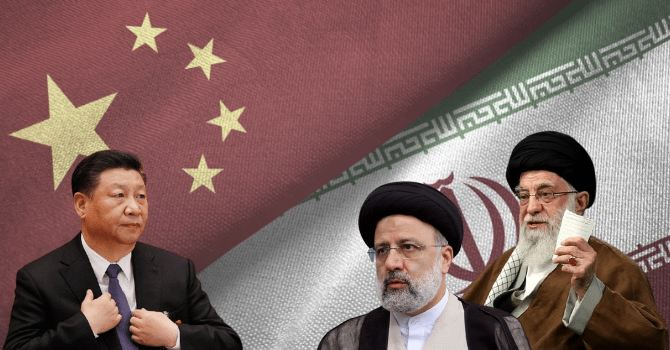 China and Iran have shared an intricate relationship for the past many years. And it all revolves around the Iran nuclear deal, or what is formally referred to as the Joint Comprehensive Plan of Action, or the JCPOA. If Iran and the US move closer to a nuclear deal, China gets to invest in Iran and increase its own influence in West Asia, but if the JCPOA negotiations fall apart, Beijing has to move away from Tehran.

Till now, China was being patient about the Iran nuclear deal, and its own relationship with the Shi’ite nation. China was ready to play the waiting game for Iran. However, the continuing uncertainty around the JCPOA has now frustrated the Chinese due to which Beijing’s patience might be running thin. In fact, it seems that after years of a complicated relationship, China may finally break up with Iran.

When it comes to Iran, Russia maintains a decades-old relationship with the Shi’ite country. But the relationship between Iran and China is relatively new. It was only after Obama finalised a flawed JCPOA with Tehran in July 2015 that China and Iran signed an agreement to expand bilateral cooperation.

Xi was one of the world leaders who had overwhelmingly supported Obama’s JCPOA. The Iran nuclear deal gave Iran a lot of leverage over the Arabs, and China wanted to ride on this leverage for serving its own interests in West Asia. In fact, China did play a role in getting the JCPOA finalised and even Barack Obama had thanked Xi Jinping for China’s role in the nuclear deal.

After the Iran nuclear deal came into force, China invested heavily in Iran. However, former US President Donald Trump shredded the Iran nuclear deal in 2018. To make things worse for Tehran and Beijing, Trump imposed some really tough sanctions on Iran. This was a bolt from the blue for China, as it was forced to limit economic engagement with the Shi’ite nation. Several Chinese companies, which were found to violate the sanctions while importing oil from Iran, got blacklisted by the US.

Trump’s Iran sanctions meant that China had to unwillingly reduce investments in Iran. However, Beijing continued to push for the revival of the Iran nuclear deal while criticising the US for unilaterally scrapping JCPOA.

China again became hopeful about the revival of JCPOA after Joe Biden came to power. Joe Biden is the former lieutenant of Barack Obama, and therefore, he was expected to vindicate Obama by reinvigorating the Iran nuclear deal.

In fact, China got so excited after Biden’s election that it rushed to sign a 25-year cooperation agreement with Iran under which it will spend $400 billion in the Shi’ite country as a consideration for a secure supply of oil to boost China’s growing economy. With its massive investments in Iran, China wanted to dump Russia and the Arabs, and fulfil its oil supply needs wholly out of the Shi’ite nation.

However, Iran is nothing less than a roller-coaster ride. Just when China thought that it can extract oil out of Iran, the Shi’ite nation went to polls. The recently concluded Presidential elections in Iran brought awful news for China. Hassan Rouhani, Iran’s moderate President who wanted to finalise the Iran nuclear deal, got replaced by Ebrahim Raisi, an ultraconservative.

Raisi supports Iranian Supreme Leader Ayatollah Ali Khamenei’s nuclear ambitions and has no interest in reviving the JCPOA. He has chosen Hossein Amirabdollahian as his Foreign Minister, who is again a hardliner allied with the Islamic Revolutionary Guard Corps (IRGC), and therefore, unlikely to support the nuclear deal.

With Raisi in power, forget any scope of the US lifting sanctions on Iran. In fact, with bilateral relations between the US and Iran deteriorating even further, you can expect more American sanctions getting imposed on the Shi’ite nation, which will jeopardise Chinese interests in the country.

The fact remains that China had chosen Iran over the Arabs and Israel as a part of its West Asia strategy. However, China’s strategy of backing Iran has backfired badly. Arabs and Israel have consolidated their power in West Asia by signing normalisation agreements called “Abraham Accords”. And Iran has been made to turn to the negotiating table by the Arabs.

China itself has realised that befriending Iran was a blunder. Supporting the Shi’ite nation after the JCPOA was scrapped by Trump was an even bigger blunder for China, which has backfired spectacularly. And now as Beijing’s patience runs thin, it might even break up with Iran.