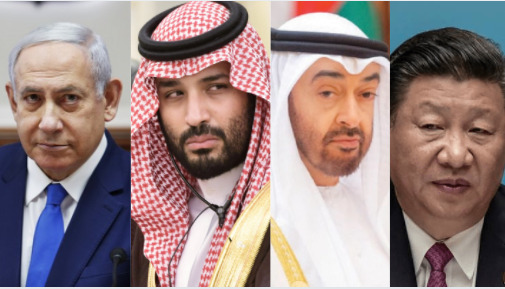 Abraham Accord partners have many things in common. They share similar adversaries and kindred allies around the globe. China is one of them, but only in the capacity of a grave security threat that it poses to the countries like Israel, Saudi Arabia and the UAE. These countries have finally realised that China is no friend and it needs to be cornered in order to prevent China from realising its hostile West Asia takeover plan.

Saudi Arabia has not signed Abraham Accord yet, at least officially, but it seems to lead the crusade against China. Recently, the gulf country inflicted a $10 billion dent on China’s Belt and Road Initiative in Pakistan. As reported by Nikkei Asia, Saudi Arabia has decided to shift a proposed $10 billion oil refinery to Karachi from Gwadar, the centre stage of the China-Pakistan Economic Corridor. Pakistan and an excited China invited the Arabs to join the CPEC in the year 2018, following which Saudi Arabia declared to pour in $10 billion in the refinery project.

The announcement was considered to be Saudi’s endorsement of China’s BRI only. However, the recent move by Mohammed bin Salman deals a massive blow to Jinping’s ambitions to develop Gwadar as a mega-investment hub in the Arabian Sea. China’s proximity to Saudi’s staunch adversaries, Iran and Turkey, has made the Arabs jittery resulting in a radical shift in Saudi Arabia’s attitude towards China. China is Saudi Arabia’s largest trade partner, consuming about 20% of the latter’s total exports. However, given the existential threat that a China-Iran alliance fosters to the Gulf countries, Saudi is looking to make China irrelevant in the region. Saudi Arabia has already refused to recognise vaccination certificates of China made vaccines, even though both Sinopharm and Sinovac are registered with the World Health Organization (WHO)

As TFI reported earlier, Israel has also bore the brunt of China’s bonhomie in recent Gaza-Israel clashes, making Israel realise that Jinping’s only agenda is to undermine the interests of the Jewish state. After China openly peddled Iranian and Palestinian line during the Israel-Hamas war, Israel is now worried about Xi’s increasingly hostile ambitions in Syria. Syria is one of many thorny issues between Israel and China, where China openly supports and endorses the Assad Government while Israel has some genuine reservations.

As per the Israeli sources, there are signs that China may be moving to take advantage of the US withdrawal from Syria as part of a larger effort to expand its footprint in the Gulf and the Middle East. The other source said, “It is obvious that the main target is to have military foothold in Syria. The US is aware of the Chinese plan but so far has not done anything to stop it.” It is now more than clear that Israel is going to hinder China’s truculent Middle East plan, starting off in Syria. Off lately, Israel also lashed out at Chinese State TV broadcaster CCTV, after it was accused of airing anti-Semitic propaganda.

But it is China after all – a country that has traditionally supported the Palestinian cause. During the latest round of clashes between Israel and Gaza, the Chinese Foreign Ministry condemned the US for blocking a UN Security Council statement against Israel. Chinese foreign ministry spokeswoman Hua Chunying said, “What we can feel is that the US keeps saying that it cares about the human rights of Muslims… but it was ignoring the suffering of the Palestinian people.” Anyhow, Israel’s realisation of China’s true character is quite significant. And it can really harm Beijing’s interests in the region. Most importantly, business relations between Israel and China might get jeopardised.

The UAE also does have an axe to grind with China as China has vaccine-trapped it and other Arab countries like Bahrain, along with a slew of developing countries. Trusting China, UAE inoculated large swathes of their population with the Chinese vaccine, yet there are no signs of herd immunity kicking in. In an act of astute brazenness, China offered exorbitantly priced booster shots of the China-made Sinopharm vaccine to the UAE to make the vaccines more effective. The ineffectiveness of the Chinese Vaccines and China’s blackmail tactics with its booster shots have greatly enraged the Emiratis whose crucial tourism sector remains shut down due to the Chinese virus. The UAE is also mulling to remove Huawei Technologies Co from its telecommunications network and distance itself from China.

China’s blatant support to Iran, Palestine and its disastrous Vaccine diplomacy with UAE and Bahrain has rubbed the Abraham Accord countries the wrong way. China is all set to suffer major geopolitical setbacks at the hands of Israel and its allies. China’s fierce clash with the Abraham Accord countries means complete erosion of China’s influence over the region and that’s soon going to be a reality.

To counter China’s BRI, G-7 nations have launched the B3W initiative and it looks exciting