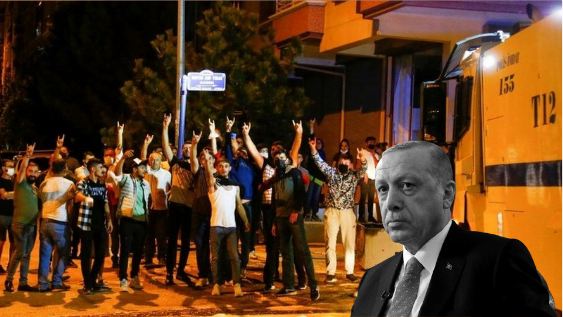 Migrants have never been a problem for Turkish President Recep Tayyip Erdoğan. Instead, he has brazenly used these migrants, coming from countries such as Syria, Iran, Afghanistan and Pakistan, as leverage against the European Union to gain more economic and political favours from the bloc. However, for Turkish people, the migrants have become a source of nauseating menace. They are stealing their jobs, enjoying the significant governmental services of which even the host communities are deprived of and carrying out terror activities that claim the lives of hundreds of innocent Turks every year.

As a result, the Turkish people have now taken the matter into their own hands. Massive anti-migrant protests have been taking place in the country since Wednesday night following reports that a Syrian refugee had stabbed two Turkish men in a fight. The incident prompted the infuriated Turkish crowds to descend upon the area that houses Syrian refugees and migrants. Videos online showed groups of men overturning cars and vandalising shops.

Furthermore, reports also emerged on Wednesday that a Turkish teenager was killed by two Syrian refugees. Subsequently, hundreds of Syrian refugees in Ankara’s Altindag district were attacked by the angry mobs and their properties and houses were set on fire. Chanting slogans like “Ya Allah bismillah, Allahu ekber” (Oh God, in the name of God, God is greatest), often associated with conservative groups in Turkey, people marching through the neighbourhood smashed cars belonging to Syrian refugees.

Locals are looting a business allegedly belonging to Syrians in Ankara’s Altindag pic.twitter.com/bwieVEmDvH

Turkey currently hosts the largest number of refugees worldwide, including three million Syrians who arrived in Turkey following the onset of a civil war in Syria in 2011. However, Turkish President Erdogan has used these migrants as a foreign policy tool to exploit the EU’s territorial vulnerabilities.

Read More: The fall of the Muslim Brotherhood regime in Tunisia has rung the death knell for Erdogan’s Libya adventure

The EU and Turkey reached a landmark deal in March 2016 to limit the arrival of asylum seekers into the southern states of Europe and especially Greece that witnessed a whopping influx of migrants in 2015 following the civil war in Syria. Under the agreement, it was agreed that Ankara would take steps to prevent new migratory routes from opening. In exchange, the European Union agreed to resettle Syrian refugees from Turkey on a one-to-one basis, reduce visa restrictions for Turkish citizens, pay 6 billion euros in aid to Turkey for Syrian migrant communities, update the customs union, and rejuvenate stalled talks regarding Turkey’s accession to the European Union.

However, it was in the year 2020 that the bloc realized its over-dependence on Turkey as a bulwark, regarding the inflow of migrants in Southern Europe. When the EU did not extend its support to the Turkish adventurism in Syria in 2020, Erdogan threatened to unleash hundreds of migrants into Greece, before eventually backing off after the EU exerted more pressure on the Turkish government.

The EU accused Turkey of engineering the migrant crisis to use this as leverage in the negotiations with Europe. “It is so dishonest of Erdogan. We cannot let ourselves be blackmailed so any new money must not come too soon. But we will probably have to pay eventually. What else can we do?” a diplomat from Brussels was quoted as saying by Reuters around 5 years ago.

Read More: In his bid to impress Biden, Erdogan has led Turkish armed forces into the Taliban quicksand

On 8 March 2020, Johannes Hahn, the EU Budget Commissioner, had said that President Erdogan was using the clashes at the border as a distraction from his problems at home, including a volatile currency and PKK party losses of Istanbul and Ankara in municipal elections.

The outbreak of new protests against the country’s migrant policy could now spell more troubles for the Turkish President. Turkish economy is already in the doldrums and his approval ratings are already plummeting. Now, as the country gets engulfed in the massive anti-migrant protests of late, it could open a Pandora box for Erdogan’s fragile hold over the country’s power.