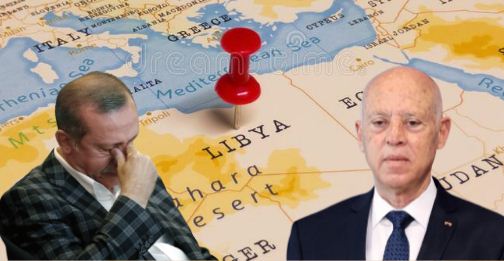 The political crisis in Tunisia has sent the Turkish establishment in a state of ambivalence. Turkey’s first reaction to Tunisian President Kais Saied’s political adventurism was harsh criticism and vehement condemnation. Turkey expressed deep concerns over the ouster of Tunisian Prime Minister and the suspension of the parliament. “Protecting the democratic gains and the unique position of Tunisia, which is an exemplary success story in terms of the democratic process in line with the expectations of the region’s people, is not only vital for Tunisia, but also for the region,” the Turkish foreign ministry said in a written statement.

However, the crisis in Tunisia is nothing less than a tightrope walk for the Turkish President Recep Tayyip Erdoğan. The Sacking of a Muslim Brotherhood sympathizer Prime Minister is an obvious trauma for Turkey. Tunisia is the sole success story of the Arab uprising and poses a clear challenge to the Arab states. However, a seething Erdogan cannot openly antagonize President Saied either. Tunisia is the immediate neighbor of Libya and thus, antagonizing Tunisia would mean a death knell for the Turkish interests in Libya.

Read More: With a naval base right into the mouth of Libya, Egypt and UAE have begun the dismantling of Turkey-backed regime in Libya

“Saied is a popularly elected president. We believe taking a more diplomatic and behind-the-scenes approach would be more helpful for Tunisian democracy,” said a senior Turkish official. On Monday, Erdogan even dialed President Saied and carefully underscored that “it was important for both Tunisia and regional democracy that the Tunisian parliament, “the source of inspiration for democratic transition in the region”, continued its works against all odds.

The fact that Erdogan has not called President Saied’s move as a “coup” and has not yet launched a diplomatic offensive against him speaks volumes of the fact that overtly antagonizing the Tunisian president could very well prove to be a disaster for Turkish ambitions in Libya.

“Saied is a popularly elected president. We believe taking a more diplomatic and behind-the-scenes approach would be more helpful for Tunisian democracy.”https://t.co/hMXr5nAHyB

The biggest potential threat that Tunisia poses to the Turkish interests in Libya is the prospect of housing foreign troops against Tripoli based Government of National accord, that is brazenly backed by Turkey in its bid to expand its own influence in the Mediterranean sea.

Of late, the International community has been pressuring foreign troops, along with Turkish troops and Turkey-backed militias, to leave the country for furthering the peace process in the troubled region. However, given President Recep Tayyip Erdoğan’s geo-strategic ambitions in the region, Turkey is unwilling to initiate a drawdown.

As per a cease fire agreement reached in last October, all the foreign forces in Libya should have left by end of January this year; however, Turkey’s belligerence has severely impaired the peace process in the North African country.

So, a political crisis in Tunisia on one hand, and Turkish belligerence in Libya on the other, provides Arab states and France with a fortune moment to wage a war against Turkish influence in Libya from Tunisian soil. France is a former colonial power in Libya and recently has signaled an EU-led military operation against “the third states” in the war-battered country.

Read More: France ups the ante against Turkey with the Kurdistan independence group

Tunisian President so far has rejected the presence of any foreign troops on Tunisian soil. While delivering a speech on the 65th anniversary of the foundation of Tunisia’s National Armed Forces in June this year, Saied made it clear that “he will not accept the presence of any foreign troops or military base in his country.” However, given his own political vulnerabilities in the ongoing political scenario, President Kais could even be pressurized to reconsider his policy by any of the vested parties, especially Arabs.

Amid the turmoil, Arab states have stood strong with the Tunisian president and have hailed his moves along with bestowing him with an overwhelming diplomatic support. Just five days after the ouster of the Prime Minister, Saudi Foreign Minister Prince Faisal Bin Farhan embarked upon an immediate visit to the country and met with his Tunisian counterpart. “The kingdom respects the decisions taken by the president of the republic and everything related to Tunisian internal affairs and considers it a sovereign matter,” a statement issued by the diplomat said.

Turkish influence in the Arab state of Libya is a constant pain in the butt for the UAE and Saudi Arabia, and thus having Tunisian support in the ongoing jostling could help the Arabs leg up their chance of triumph. The Arabs already have a significant military presence in Egypt and thus, Tunisian crisis could very well open the window of opportunity for the Arabs to have Tunisian support against Turkey. Dealing with a two-front war scenario in Libya would be a tedious task for Turkey and that would simply mean a death knell for its exorbitant ambitions in the region.