The Arab Spring uprising in 2011 had forced Yemen’s longtime authoritarian president, Ali Abdullah Saleh, to hand over the power to his deputy, Abdrabbuh Mansour Hadi. The move was supposed to bring stability to the country; instead, it further plunged the country into chaos that eventuated into a civil war. Abdrabbuh Hadi was an extremely weak president that provided a fortune moment to the Houthis to launch a series of rebellion against the new government.

In 2014 and early 2015, the rebels finally took over the capital city of Sanaa that set the alarm bells ringing in Riyadh and other Arab states. Saudi Arabia along with 8 Arab nations launched an air campaign against the Houthis. The ongoing fighting has claimed more than 100,000 lives since then. Thousands more have died out of preventable causes, including poor health, malnutrition and poverty. Yemen has been completely devastated; roads, schools and hospitals have been razed and the Houthis have acquired power more than ever.

Read More: Saudi Arabia is all set to deport 800,000 Yeminis from its soil, and the repercussions could be disastrous for Iran and Houthis

Yemen has been turned into a warzone between Iran and Saudi Arabia, and their adventurism in the war-torn country has served no one’s interests. The six years of war has proven to be a costly affair for the Arabs and their allies. The United Arab Emirates had withdrawn from the war in 2019 and now an exhausted Saudi Arabia is trying to engage Iran in negotiations over the ongoing battle in Yemen.

Yemen’s geological location is of great strategic importance to both Saudi and Iran. The country sits at the top of the “Bab-al Mandab” strait, a narrow passage between the Red Sea and the Gulf of Aden that facilitates most of the trade between Asia and Europe through the Mediterranean Sea. Saudi Arabia and Iran, both being oil-rich states want to wield control of this extremely crucial strait and that is a major driving factor behind their intervention in Yemen.

But six years of war have pressed the foreign powers into a political deadlock. The Arabs have been supporting the civilian government in Yemen that has failed to garner any popular support among the Yemenis. There are only two major power blocs in the country. The Iran-backed Houthis control much of northern Yemen while the Southern Transitional Council (STC) enjoys influence over the Southern region. The Arabs don’t view STC as their enemies and thus, any future negotiation between Arabs and the STC could help both the parties reach the break-through point.

This is more than clear that the ongoing proxy war between Iran and Saudi Arabia has brought nothing other than devastation to the country and a political solution should be the focus of all parties involved. The negotiations, preferably mediated by an external yet influential force, should be put in place immediately if the deadlock is to be overcome. The process could very well be initiated at the behest of France that not only wields a greater influence over all the parties involved but also has an imperial connection to the war-torn country.

Read More: Yemeni War is the Single Bloodiest war in over 30 Years

A political settlement is the only way forward to the Yemen crisis and it must be facilitated by none other than Paris. The Biden-led US can’t be trusted anymore given his debacle in Afghanistan and America’s longstanding animosity to Iran. Also, Russia too can’t be considered for the role of a mediator given the lack of influence that Moscow enjoys over Western countries. And China’s increasing proximity to Iran is what disqualifies Beijing for the job of reconciliation between the two arch-rivals. Hence, Paris should chime in to play its deserving role of a mediator.

The Yemen crisis also traces its roots into the glaring sectarian divide in the country and this should form the basis of any future reconciliation efforts by Paris. Yemen is home to two major religious groups, the Zaydi Shia Muslims in the north and the Sunni Muslims of the Shafi’i school in the south and east.

The Houthis have been helping to poison the atmosphere by employing Zaydi Shia terminology and demonizing Sunni adversaries. They have been overtly backed by Iran which eyes to mitigate Saudi Arabia’s influence in the country. On the other side, the anti-Houthi militias have also established brigades with sectarian or region-centric names.

Based on the deep-rooted sectarian divide in the country, one solution to the Yemen crisis could be to bifurcate the state between the Sunni and the Shia factions. Getting Iran to accept such a proposal could be a tedious task as it would strip Iran-backed Houthis off their claims over the southern regions of Yemen. However, once reached, such a proposal could mark the beginning of a politically stable Yemen that would help the sulking people of the country the most. 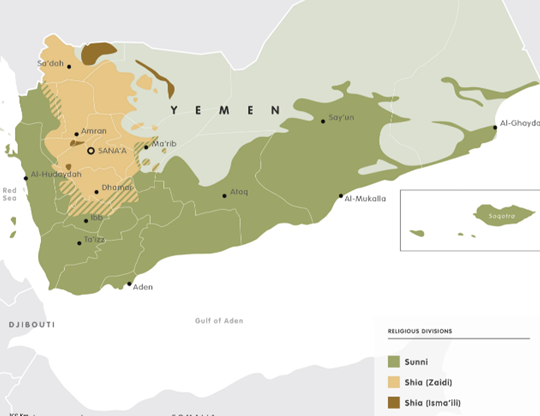 The other political solution could be reached based on the territories held by each of the fighting groups currently. The western provinces of the country, adjacent to the Red Sea, are currently held by the Houthis while the eastern and the southern parts are held by the Arabs and the STC respectively. As previously stated, reconciliation between the STC and the Arabs (and the Saudi-backed government) can be reached while keeping the Houthis confined to the Shia-majority regions. 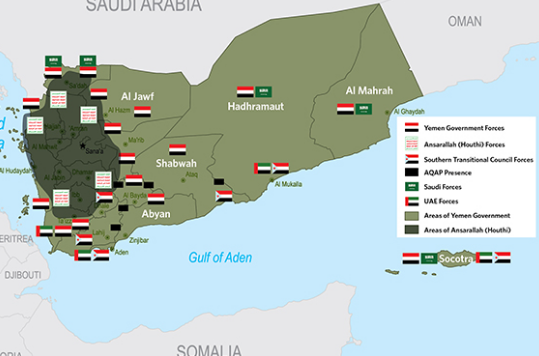 The Yemeni exiled government views the STC as a secessionist force and opposes any reconciliation with the group; however, the group is viewed as a potential partner by the Arabs. The STC not only controls the region closer to the Bab-al Mandab strait but also controls the port of Aden that could play an instrumental role in resuscitating the country’s economy once any political settlement between the groups is reached.

France is the most favoured nation to initiate such a reconciliation process as it could very well assist Iran-backed Hezbollah in Lebanon and help the Shi’ite nation deal with the JCPOA crisis. Iran is also feeling threatened with the rise of a Sunni-dominated Taliban on its doorstep and its economy has plummeted to alarming levels. France and the Arabs can help Iran dealing with the vehement crisis at home.

The war in Yemen is in no one’s interests and the end to it could bring a much-needed respite to not only the Yemeni people but also to the battling proxies of Iran and the Saudis. If the war in Yemen is brought to cease, both rivals can precisely focus and even bury the hatchet to deal with the security threats emanating from Afghanistan. The move could alter the geopolitical equations of the region forever. Hence, France should immediately shed off the geopolitical hesitancy and work upon the strategy to bring all the battling parties to the negotiating table.