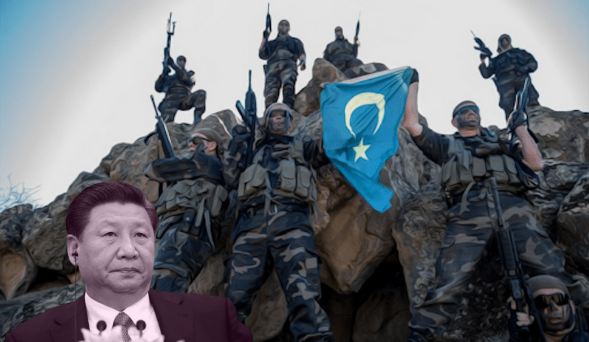 Number one enemy of China – the Eastern Turkestan Islamic Movement, also called the ETIM, is back. And with the US withdrawal, China’s problems are only going to compound further. Interestingly, things have slipped out of China’s hands all of a sudden and ETIM looks more powerful than ever.

What is the ETIM?

The United Nations Security Council (UNSC) describes the ETIM as “an organization which has used violence to further its aim of setting up an independent so-called “East Turkestan” within China. Since its establishment, ETIM has maintained close ties with the Taliban, Al-Qaida and the Islamic Movement of Uzbekistan.”

The UNSC adds, “It was founded by Hasan Mahsum from Xinjiang, China, who was killed by Pakistani troops in October 2003. ETIM is currently led by Abdul Haq, who was also a member of Al-Qaida’s Shura Council as of 2005.”

So, there are two key takeaways here-

● The ETIM is a Xinjiang-focussed organisation that wants to carve out the far Western Chinese province and establish an independent East Turkestan.

● ETIM is based in Afghanistan and maintains close ties with the Taliban.

Why ETIM is in news all over again?

China has been worried about the ETIM ever since the US troops withdrawal because it feels that the troops pull out creates a lot of vacuum and ungoverned spaces in Afghanistan, which could allow ETIM to prosper all over again.

A latest Newsweek report now corroborates China’s fears. The report comprised of the first remarks by the ETIM, a secretive militant group, since it was removed from a US list of terrorist organizations.

Newsweek quoted the ETIM spokesperson as saying, “The United States is a strong country, it has its own strategy, and we see the withdrawal of the American government today from this war in Afghanistan, which is incurring huge economic losses, as a means of confronting China, who are the enemy of all humanity and religions on the face of the Earth.”

The evidently angry ETIM spokesperson slammed China. He said, “East Turkestan is the land of the Uyghurs.” The spokesperson added, “After the Chinese government occupied our homeland by force, they forced us to leave our homeland because of their oppression against us. The whole world knows that East Turkestan has always been the land of the Uyghurs.”

How could the US get involved?

Interestingly, Newsweek also quoted the ETIM spokesperson as saying, “We believe that the opposition of the United States to China will not only benefit the Turkestan Islamic Party and the people of Turkestan, but also all mankind.”

The fact that the ETIM hates China and wants to free Xinjiang from the clutches of the CCP is well-known. However, this is the first time that the Afghanistan-based militant group is actually suggesting that “the opposition of the United States to China” would aid the Turkestan Islamic Party, which is an alternate reference to the ETIM.

In fact, what the ETIM spokesperson said isn’t really a matter of propaganda. Last year, the US had removed the designation of the ETIM as a terror group. The State Department had denied any evidence of the very existence of the ETIM.

Moreover, the US is believed to have targeted the ETIM with airstrikes only till 2018, which is roughly the same time when the Western world started to slam Chinese human rights violations against Uyghur Muslims in Xinjiang.

The US went easy on ETIM and later delisted it as US-China ties deteriorated, but it isn’t as if the US doesn’t know that ETIM exists or that it has plans to sever Xinjiang from China. When the American media is taking remarks from an ETIM spokesperson, we can safely assume that even the American intelligence community isn’t unaware of their existence.

And then the US has an entire history of inducing the creation of militants to target its adversaries. This is what it did in countries like Libya and Syria. It won’t be too remote a possibility if the US actually does nothing about the ETIM, or even supports it on a policy basis to target Xinjiang.

US organisations like the National Endowment for Democracy have also been promoting activism against Chinese human rights violations in Xinjiang and have already started referring to the region as East Turkestan. There is at least an ideological semblance in the US policy and ETIM philosophy on the core issue of Xinjiang liberation movement.

Beijing had struck a deal with the Taliban. China would pay money to the Taliban and the Taliban would curb the ETIM in return. The Taliban has been milking China, but the way the ETIM is showing signs of resurgence suggests that either the Taliban has failed to keep its part of the deal or it has deliberately omitted to do so. In any case, it is China which is suddenly emerging as the biggest loser in Afghanistan, with a powerful and vigorous ETIM knocking on its doors.