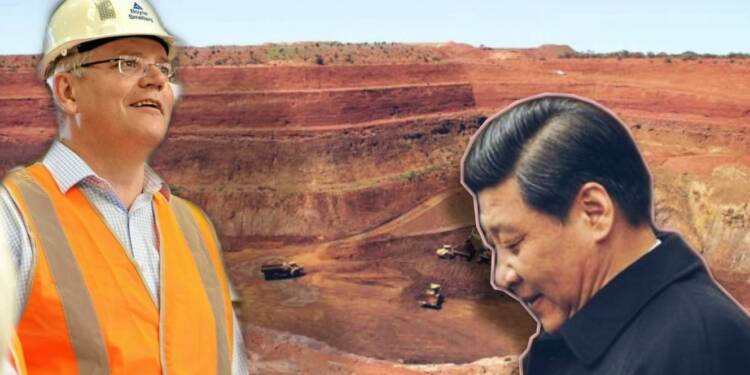 Human history tells us that when things go down to the wire and two civilisations clash with each other, it not the size of the dog in the fight but the size of the fight in the dog that matters. Today as China and Australia clash with each other, it seems that Australia with a much smaller economy might be able to beat China simply because of its steely resolve and will to fight.

In fact, Canberra is looking to dethrone Beijing’s near-monopoly in a key sector- rare-earth mining which is going to define the future of human existence. Australia realises its enormous potential as a vast repository of rare earth minerals that can help it bring radical changes to the rare earth supply chain and destroy China’s stronghold in the sector.

The most important sector bound to consume much of the rare earth metals supply in the future is the e-vehicles industry. However, China is expected to divert most of its rare earth production towards domestic use and therefore leading carmakers like BMW and General Motors must look at sources outside China to fulfill their rare earth demand.

In fact, European automakers are reportedly in talks with Australian rare earth explorer Arafura Resources for sourcing the rare earth metals that help power electric vehicles. Arafura is presently developing the $1 billion Nolans project in Australia’s Northern Territory which would cover as much as ten percent of the global demand for a particular type of rare earth used to produce magnets for electric vehicles.

In an interview, Arafura Chief Financial Officer Peter Sherrington said, “We have engagement with European manufacturers to directly supply them with material.” Sherrington added that he expects to ink deals by the year-end because talks have gone as far as finalising volumes and price.

With Scott’s rare earth push, Australia expects to grow into a rare-earth giant and create an industry worth $20.6 billion by 2025 that translates into 10.4% compound annual growth rate from the year 2020.

Scott Morrison’s rare earth push is also finding support from Quad, a group of four Indo-Pacific nations comprising India, Australia, Japan and the US that aspires to contain Chinese hegemony. For Tokyo and Washington, Australia’s rare earth mining industry is strategically crucial as China has a history of trying to leverage its near-monopoly in the sector to hurt its economic interests.

In fact, in a recent Quad meeting in Washington D.C., the leaders of the four Quad nations discussed ways to improve the supply chain of rare earth among other issues. Morrison disclosed that Quad leaders expressed appreciation for Canberra’s role in supplying critical minerals “because that is a necessary supply for the many industries and processing works that they operate themselves”.

The Australian PM added, “On critical minerals, Australia is one of the biggest producers, but we believe we can play a bigger role in a critical supply chain that is supporting the technologies of the future.”

Interestingly, Morrison announced a clean energy summit after the Quad meeting and said Australia is “really good at digging stuff up”. Now, there is a lot of symbolism in Morrison’s words. He is suggesting that since Australia is good at mining, it can help the global transition to clean energy. This is a clear indication of Australia’s intent to become the supplier of rare earth to Quad nations and other like-minded powers in the near future.

Australia’s Great Power ambitions and desire to check Chinese hegemony are no secret. It seems that Scott Morrison is placing his bets on the rare earth sector to achieve his nation’s big dreams.