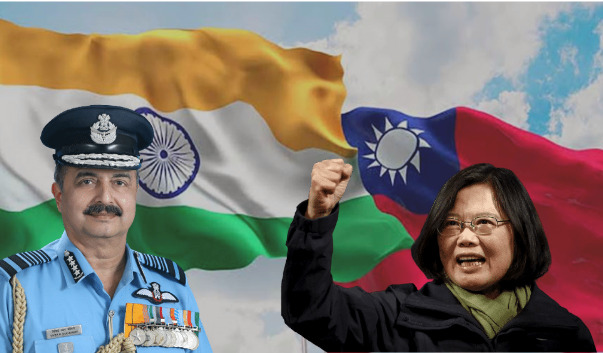 In total, about 150 aircraft were dispatched to Taiwan’s defence zone. The flights, according to some observers, could be interpreted as a warning to Taiwan’s president ahead of the island’s national day. The Mainland Affairs Council (MAC), Taiwan’s highest China policy-making body, warned Beijing of “seriously endangering the status quo of peace and stability in the Taiwan Strait.” During a press conference, the Indian Air Force Chief when asked stated that the matter is between two countries and he will refrain from making any comments.

While he did not comment on the situation, he subtly accepted Taiwan as a country and made sure to emphasise the same. It is a very significant development, given the geopolitical environment of today. The Chinese aggressive posturing is reaching its threshold point and going ahead, the question of status quo in the Taiwan Strait will be really difficult to manage. As Taiwan faces increased hostility from the Chinese Communist Party, these kinds of messages from like-minded and democratic countries go a long way to assure Taiwan as well as remind China of the consequences.

According to a map released by the Taiwanese government, the latest Chinese operation featured 34 J-16 fighters and 12 nuclear-capable H-6 bombers, all of which flew near the Taiwan-controlled Pratas Islands.

India’s increasing engagement with and support for Taiwan

Giving a jolt to One China policy, the Narendra Modi government is in advanced talks with Taiwan over bringing a chip plant worth an estimated $7.5 billion to India to supply everything from 5G devices to electric cars. Ever since the pandemic began, the rise in demand for electrical equipment has led to an increase in the demand for semiconductors. However, directly dealing with Taiwan is expected to antagonize China which considers Taiwan, a part of its authoritarian ‘One China’ Policy.

When we view the statement of the Indian Air Chief, then it makes all the more sense, how subtly India is trying to shift the popular narrative away from one-China policy towards considering Taiwan as a sovereign nation.