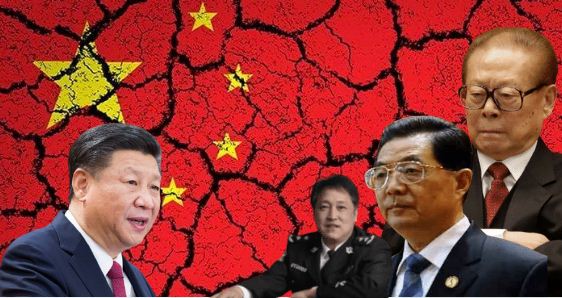 Chinese President Xi Jinping’s life has come under threat. For many years now, the Chinese Communist Party has been tolerating Jinping’s shenanigans. Now, an all-out power struggle has made its way to public glare. Jinping’s authority is increasingly being challenged, and the Jiang Zemin-supportive Shanghai faction is even beginning to take shots at Xi Jinping’s life. This is what happens when you remove a two-term limit only to remain in power till you draw your last breath. Xi Jinping, to be honest, overestimated his own power and influence within the CCP. He thought he could secure a lifelong regime for himself in China, but the CCP is beginning to differ on a big scale.

Over the past one year, there have been attempts on Xi Jinping’s life. In fact, the power struggle within the CCP has become so intense now that the Central Disciplinary Commission (CDC), admitted publicly that there was a plot against Xi. On September 13, two major news portals in China published the same article that recapped a CDC “morning brief,” which disclosed that a “sinister gang” within the public security bureau tried to make an attempt on Xi’s life.

According to the report, the alleged culprit, Luo Wenjin, was head of the Criminal Police Brigade of the Public Security Bureau of Jiangsu Province. He tried to make the attempt when Xi officiated a commemorative function in Nanjing. The CDC brief revealed that Lai Xiaomin, the former head of China Huarong Asset Management Co., was also behind the plot. Interestingly, in January this year, Lai got the death penalty. This left many wondering as to why a big shot like him was killed for supposedly being involved in corruption alone. However, now that we know he was behind a plot to kill Xi Jinping, the death penalty makes more sense.

Jiang Zemin and The Shanghai Faction Are After Jinping’s Life

According to the Epoch Times, Lai was known to have close ties to Zeng Qinghong, the former vice president of China. Zeng was a diehard loyalist of former CCP leader Jiang Zemin. Naturally, this leads to speculations that the Jiang-Zeng faction was indirectly involved in the plot to take down Xi.

Meanwhile, as reported by TFI recently, Fu Zhenghua, deputy director of the social and legal affairs committee of the Chinese People’s Political Consultative Conference (CPPCC) is the recent stalwart in China who has come under disciplinary investigation at the directions of Xi Jinping. Let’s just say, Fu Zhenghua has been Xi Jinping’s loyalist for the past decade. The announcement of an investigation against Fu Zhenghua comes just days after the CCP announced it was expelling former vice minister of public security Sun Lijun, accusing him of “forming cliques and cabals to take over a key department,” and of having a private stash of confidential documents.

As it now turns out, both Fu and Sun seem to have been targeted for being part of the same plot which aimed to take Xi Jinping’s life.

As per a WSJ exclusive report, Xi has launched a round of inspections of Chinese financial institutions. The inspections were announced last month and they focus on whether state-owned banks, investment funds and financial regulators have got too close to private firms. As reported by TFI, the Chinese financial sector is seen as the very power base of Vice President Wang Qishan. Therefore, the political connection behind Xi’s crackdown on the financial sector directly relates to China’s Vice President Wang Qishan.

Qishan served as Xi’s antigraft Tsar during the Chinese President’s first term in power. During his stint as Xi’s anticorruption head, Qishan avoided probing the financial sector, even as he launched investigations into other parts of the Chinese economy. This was, of course, a political move by Qishan to maintain his stronghold in the Chinese economy. Now, Xi Jinping is trying to clip Qishan’s power and authority.

Moreover, Wang Qishan is also a part of the ongoing power struggle within the CCP. In a Weibo post published on October 2, Caixin Media likened President Xi Jinping to a pig. The post had a picture of five pig heads hanging in front of a butcher’s shop, and the caption said that no one would want to establish a strategic partnership with stupid people. This came in the backdrop of Chinese people coining many derogative nicknames for Xi, one of which is “Pig’s Head.”

Interestingly, Caixin’s chief editor, Hu Shuli, has close ties to Chinese Vice President, Wang Qishan. So, Wang Qishan also seems to be a part of a plot that seeks to overthrow Xi Jinping. Therefore, the power struggle within the CCP actually seems to be becoming an all-out mutiny against Jinping’s authority, and there are only so many attempts which the CCP General Secretary can survive, while himself trying to overpower his opponents.

Xi Jinping is working from home. Chinese President Xi Jinping has not stepped out of China for 20 months now. This is the longest time that any G20 leader has locked themselves within their own country. This is because Jinping is too insecure to leave China, fearing a regime-change behind his back while he is away from Chinese shores.  Meanwhile, Paul Monk, a leading Chinese policy expert, said that if one pays attention, they can see President Xi’s regime is “floundering“.

He said, “There is a major power struggle going on inside the CCP and its growing, between Xi’s cronies and the old pro-reform party members. They had expected an opening up and reform. Xi backed down on reform and is going in the opposite direction.” Monk then added, “That is causing rising tensions within the party. They’re making enemies all around their perimeter, which no sensible strategist would do.”

Not only does Xi Jinping now have to fear being thrown out of power, in recent times, his opponents have effectively made it clear that they will stop at nothing, and are even beginning to take aim at the Chinese despot’s life. Needless to say, Jinping’s bodyguards will not be able to protect him every single time somebody tries to kill him.