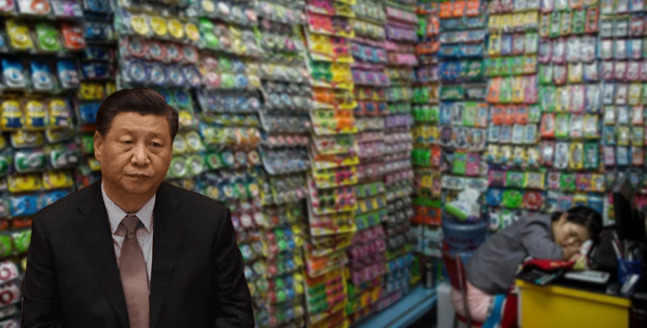 China’s retail sales market is in really poor shape. The Chinese retail market was expected to pick up as the impact of the Coronavirus Pandemic eased across the world. Yet, people in China haven’t been spending a great amount of money. With growing uncertainty about the future of the Chinese economy, people are also saving up and defeating Xi Jinping’s dual circulation plan of an economic revival by relying on the domestic market.

Chinese citizens have cut down on shopping and travelling. China’s retail sales growth in August was tepid at a humble 2.5% down significantly from the expected 7%. Even the seven-day holiday from October 1 to October 7, which usually propels travelling and retail spending in China, witnessed a decline of 5% year on year as fewer Chinese people travelled around. Frequent Coronavirus outbreaks, expensive tickets and a deep economic crisis are ailing China’s retail sales.

Why Xi wants a strong retail sector in China?

There is a fundamental difference between how the Indian and the Chinese economies are designed. India has a resilient stock market and overall economy, which isn’t reliant on exports and the outside world for wealth creation. There is a strong force of small retail investors in the Indian stock market that isolates the economy from external pressures.

Last year, Xi realised Beijing’s vulnerabilities even as the US, Japan and India started decoupling the Chinese economy. To boost domestic consumption, circulation of money and generation of wealth, Xi launched the “dual circulation” policy. Xi was looking to harness the advantage of a humongous Chinese market and set off the impact of changing global supply chains.

Xi is terrified by the prospect of a further downfall in the Chinese exports economy. Several factors like the ongoing power crisis in China due to an unofficial ban on Australian coal jammed ports and the real estate market crisis have triggered an economic recession of sorts within the Communist nation. Manufacturing activity is going down swiftly in China which effectively means – dwindling exports. At such a juncture, Xi wants to resurrect the retail sector desperately.

To start with, the foundations of the Chinese retail economy are really weak. Though the numbers used to be high, 42 per cent of China’s total retail sales in 2008 were concentrated in the prosperous provinces of Guangdong, Shandong, Jiangsu, Zhejiang, and Henan.

Poorer regions like Qinghai, Ningxia, Hainan, and Gansu never really had a strong retail economy due to low incomes and a lack of effort by the Chinese Communist Party (CCP) to bridge the rural-urban income gap or to encourage the growth of backward regions.

Now, even the regions that once used to pump china’s retail sales market have stopped boosting economic activity. China’s dwindling airline business is a big example of how people in China have simply stopped spending. Airporta data reveals that since early August, the number of flights in China has remained well below the 2020 levels.

Similarly, land and real estate sales, which form a major share of local government revenues in China, have dropped sharply. While the reduced land sales can be attributed largely to the Evergrande crisis and the overall real estate bubble in China, reduced purchasing power also seems to have a role to play.

At the end of the day, the general sentiment in China is pretty bad. With frequent blackouts in Chinese households, people are worried about the grim prospects of the Chinese economy shortly. Adding to it the reports of a ballooning debt crisis which shows no signs of abatement and the exodus of foreign investments out of the Chinese economy, which is also causing mayhem in the Chinese stock markets.

🇨🇳 #China | According to Airportia data, since early Aug., the number of flights has remained well below 2020 levels.
*Link: https://t.co/caXp67Jqn6 pic.twitter.com/cHkPkSZhPP

When the Chinese people see a grim future right before their eyes, they show reluctance in ramping up retail spending. People in China fear a bigger crisis and therefore they are saving whatever they have to meet such a contingency. Ultimately, the reluctance of Chinese people in spending more translates into a timid retail market that makes rescuing the Chinese economy that much more difficult for Xi Jinping.