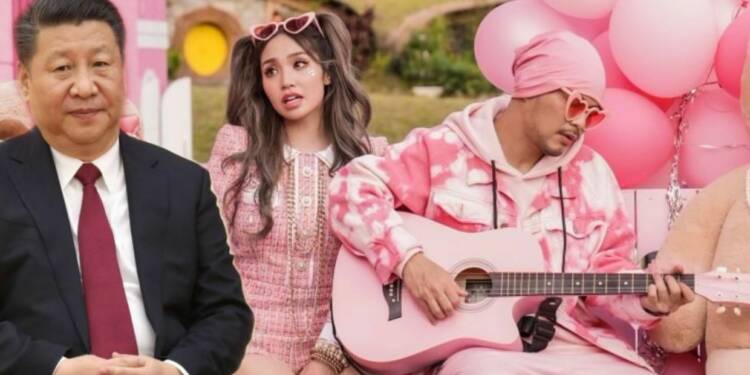 Singer Namewee, and Kimberley Chen roasted the CCP : Chinese President Xi Jinping fears his country’s citizens. He often tries to harm them personally with a broad range of crackdowns and regulatory measures. But he fears Chinese dissidents and the Chinese diaspora in other countries even more.

In China, the CCP has created a Police State that relies on heavy censorship and mass surveillance to muzzle dissent. However, what can you do about Chinese dissidents leaving abroad without any fear of being reprimanded by the CCP or getting incarcerated in a detention centre by the CCP officials. The CCP has tried devious methods like blackmailing the mainland relatives of Chinese dissidents abroad in order to blackmail them. Yet, Chinese people living overseas keep finding ways to expose the CCP like this group of singers just did. And the CCP is left scrambling for ways to silence them.

Chinese President Xi Jinping fears a lot of people- his political rivals or the “Shanghai Faction”, the Chinese youth, the tech and edutech entrepreneurs, English teachers, private tutors and even singers. Yes, singers Namewee, and Kimberley Chen are the latest addition in Xi Jinping’s hate-list.

Global Times, a Chinese State-owned publication that serves as a CCP mouthpiece, wrote, “Malaysian singer and songwriter, Namewee, and Australian singer Kimberley Chen, have been removed from China’s social and streaming platforms as of Sunday after they released a song which is considered to have insulted the Chinese people.”

It added, “The song named “Fragile”, or literally “Heart of Glass,” released on Friday is considered to contain insults against the Chinese people under the surface of a romantic love song.”

The amusing song mocked the CCP and Chinese keyboard warriors

As per the Chinese State-owned publication, “Fragile” contains a panda figure that keeps dancing in the background and the entire number is shot in a pink-coloured set. Global Times alleged, “These are symbols considered to be related to China and targeted at the “Little Pink,” a term used by the media to refer to young people who are fired up with patriotic zeal and try to guard China against any criticism online.”

Much to Beijing’s chagrin, the amusing number also made a reference to Chinese human rights violations. Global Times stated, “Many other offensive elements are found in the lyrics and the video. The singers mention the Chinese people’s love for “dog, cats, bats and civets” as the clip shows the panda cooking a pot of bat soup. The singers also referred to “forced labor and detention camps in Xinjiang,” something that has been repeatedly refuted by local citizens.”

This is in line with the Milk Tea Alliance, a group of netizens belonging to Hong Kong, Taiwan, Thailand and Myanmar that originally started as an internet meme against the enhanced presence of Chinese trolls Army and ultra-nationalist elements on internet. The movement also has significant presence in South Korea, the Philippines, India, Malaysia, Indonesia, Belarus and Iran.

Chinese wolf-warrior diplomacy has been hurt profoundly by the Milk Tea Alliance, which has grown into an online democratic solidarity movement. Public opinion against the CCP has grown increasingly hostile in countries like Thailand forcing governments to act against Beijing in order to soothe local demands.

“Fragile” has clearly hurt the fragile ego of Chinese Communist hardliners. This is why they decided to remove Namewee and Kimberley Chen from Chinese streaming platforms. However, China’s problem isn’t limited to overseas singers who mock the CCP.

Last year, the Communist hardliners in China tried to take on the most popular K-Pop Boy Group- BTS though the Chinese propaganda machinery led by the CCP mouthpiece Global Times had to back off after it proved no match for BTS’s worldwide fanbase- ARMY (Adorable Representative M.C. for Youth). BTS alone was enough to quell shallow Chinese nationalism and boycott calls. Yet, it is clear that CCP fanboys won’t listen to BTS.

The Chinese Communist Party has now banned the effete men from being broadcasted on TV and asked its media to promote “revolutionary culture,” broadening a campaign to tighten control over business and society and enforce official morality. Broadcasters must “resolutely put an end to sissy men and other abnormal esthetics,” the TV regulator said, using an insulting slang term for effeminate men — “Niang pao,” or literally, “girlie guns.”

So, CCP hardliners won’t listen to BTS or to the “sissy” and “effeminate” types. They will listen only to the cringe raps that celebrate and enlist CCP ‘achievements’.