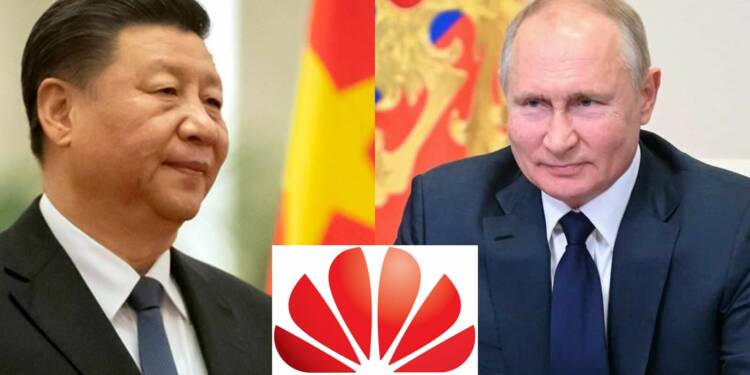 Huawei has been the biggest loser of the trade war between the US and China under the previous Donald Trump administration. Once the face of the thriving Chinese tech sector, Huawei is today struggling to keep its wheels turning. The Chinese company weighed down under tremendous sanctions imposed by the West, forcing it to crawl to other overseas markets.

It was then when Huawei decided to ramp up its operations in Russia, its newfound failsafe, to alleviate its miseries. In 2019, Huawei signed a deal on 5G network with MTS, Russia’s biggest Telecom operator. Now, as China pins all its hopes on Russia for saving Huawei’s sinking fortunes, Moscow has made it abundantly clear that Huawei’s participation in its IT and telecom sector won’t be encouraged.

Chief of the Presidential Directorate for the Development of Information and Communication Technology and Communication Infrastructure, Tatyana Matveeva, on Tuesday said that critical IT infrastructure should be designed and operated based on “proven domestic solutions”. She further said, “creating an efficient environment for developing Russian telecom operators and internet companies is an important area of state regulation, as well as ensuring the safety of people in terms of protecting personal data, combating the spread of prohibited information, fraud, and cyberbullying.”

If Matveeva’s statement is any indication, Russia will discourage foreign players from seeking operating rights in territories under its control. In the last two years, Huawei has made significant inroads in Russia’s cloud-computing, telecom and 5G sectors, stoking concerns among Russian authorities given Huawei’s questionable credibility.

At official levels, Russia has always supported Huawei while condemning the West’s sanctions against the Chinese company. Russia has also allowed Huawei to compete in a series of commercial 5G trails in partnership with Swedish telecom vendor Ericson. In March 2020, Huawei announced its partnership with Russia’s largest bank, Sberbank, which is now moving into the cloud-computing sector.

In August 2020, Russian foreign minister Sergei Lavrov mentioned that Russia was ready to work with Huawei on 5G technology. Russia’s assurances ratcheted up Huawei’s confidence in the Russian market, prompting it to increase investments in Russian operations. Huawei’s founder, Ren Zhengfei, said, “After the United States included us in the Entity List, we transferred our investment in the United States to Russia, increased Russian investment, expanded the Russian scientist team, and increased the salary of Russian scientists.” Later on, Huawei touted itself as the leader of the Russian digital economy, with intentions of spreading its tentacles into more sectors.

Russia is concerned about the fact that China could leverage Huawei’s key role in the Russian economy against Moscow, hence posing a national security threat for the nation. Russia and China are not allies. Moscow is aware of China’s expansionist ambitions in Russia’s Far East and into the Russia-dominated Arctic Circle. Russia also fears Huawei could be used as an espionage tool by Beijing.

Read More: ‘If US is willing to follow Trump’s policy, Russia can help the G-7 against China,’ Putin makes his intentions clear

One analyst at the Russian International Affairs Council in Moscow even mentioned the fact that Chinese Huawei is no different from Western options. He had stated, “Russian overdependence on Huawei technology could itself pose security and economic risks for the country. It is also quite possible, though, that Russian decision-makers are making a lesser of two evils calculus.”

Moreover, the Russian security establishment has also expressed its displeasure over Huawei’s increasing role in the country’s digital economy. A major component of the 5G technology is to use the 3.4-3.8 GHz frequencies for which the Russian military and the Russian space agency are unwilling to give away. In 2015, Russia along with the US abstained from using the said frequencies for commercial usages and there’s no reason to advocate that Russia would not do it again.

In another major blow to the CCP’s Huawei, the Russian Ministry of Digital Development Communications and Mass Media last year had offered to develop 5G within the 4.8-4.9 GHz frequency but imported foreign equipment cannot be applied in the given frequency.

Read More: As Russia starts preparing a nice burial for Huawei, it is safe to assume the Chinese telecom giant is dying

The 5G technology will play an important role, in the military as well as in improving the digital well-being of Russia, and thus it would not be a surprise if Russia opts to develop its own 5G capabilities. It even has a roadmap ready to roll out 5G in 2022. Russia’s foreign relations with China are based on their commonalities, and their commonalities are limited to their affinity to authoritarian regimes and their tensions with the US.

And that’s where it ends.