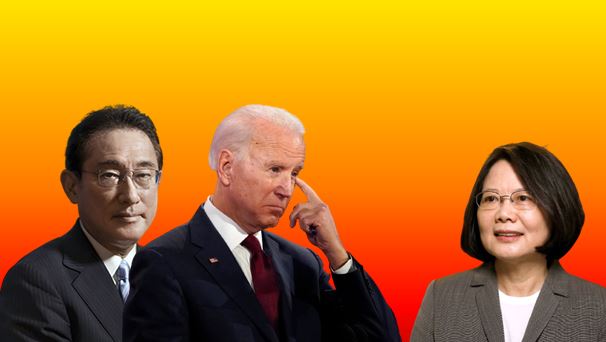 The actions of the latest Kishida administration has surpassed the expectations of those who were hawkish of the foreign policy approach of the Prime Minister – right from working with Taiwan Semiconductor Manufacturing Company (TSMC), to building a semiconductor manufacturing unit in Japan, investments in South East Asian countries, restructuring of the economy to make the flow of investments easier, to providing a voice to the concerns of Taiwan in the absence of Biden’s USA. Now, due to this immense pressure from Japan, Joe Biden is being forced to issue a statement in favour of Taiwan. President Joe Biden stated that if China attacked Taiwan, the US would favour Taiwan, reversing a long-held US foreign policy position.

However, continuing with the meek policy, a White House spokesman later assured US media outlets that his comments did not signal a policy shift. These flip flops were highlighted by the Chinese Communist Party mouthpiece Global Times, which considered this to be just a slip of tongue. Leaving aside what is expected of Joe Biden, the important bit here is that, Biden was forced to address the issue of Taiwan and show favour, and the fact remains that it was Japan which forced this action with its overt show of engaging foreign policy.

Japan’s Defence Minister Nobuo Kishi, in a veiled allusion to China’s recent aggressive steps on Taiwan, used Russia’s acquisition of Crimea as an example of how an invasion might begin without the deployment of troops. In a video address to the 18th CSIS/Nikkei Symposium on Friday, Nobuo Kishi called Russia’s action an “illegal invasion of Crimea.” “An invasion can happen without anyone knowing, and a war can be conducted without the employment of military forces.”

Last month, he gave an interview to the Mainichi Shimbun, where he made it clear that Tokyo cannot stay outside the developments in Taiwan, as both Japan and Taiwan shared universal values like freedom and democracy. He also noted that Taiwan is located at a short distance from Japan, because of which, Japan cannot ignore what happens in Taiwan. Nobuo said that the fate of Taiwan is important for Japan’s security, as well as for international peace and stability.

Nobuo’s message was and is clear – China is the main culprit in the region and Japan won’t let it invade the island nation of Taiwan. Japan is increasing the effectiveness and operational efficiency of its self-defence forces and is practically preparing for a warlike situation in the Taiwan Strait, if China makes any reckless move to take on Taiwan. At the same time, Japan is revamping its economic policies as well as broadening ties with other countries which are distraught by Joe Biden, like France for instance.

Japan-France relations and a warning to Joe Biden

The French government announced on Tuesday that Japan and France intend to undertake security discussions involving their foreign and defence ministries within the year. According to sources familiar with the situation, the so-called two-plus-two negotiations will take place in Tokyo, most likely in late November or early December. Foreign Minister Jean-Yves Le Drian and Minister of the Armed Forces Florence Parly are due to meet in Tokyo for the first time since 2019.

Read more: A Japan-France alliance in the Indo-Pacific is Tokyo’s stern message to Washington

Earlier, the Japanese and French presidents conducted an 80-minute one-on-one lunch meeting during Yoshihide Suga’s presidency. Human rights violations by the Chinese government in Hong Kong and Xinjiang are described as “serious concerns” in a joint statement made after the conference. With all these background developments, and with Joe Biden empowering China, Japan has decided to give a stern message to the Biden administration regarding the rules of the game in the Indo-Pacific and regarding how he treats his treaty and non-treaty allies in the region.

Japanese Prime Minister Fumio Kishida’s policies have rattled Joe Biden and his administration, and the way in which he is synchronising the foreign policy and the domestic issues has started the talks of the rise of a new regional leader in Japan, under Kishida. The overtly reluctant statement by Joe Biden in favour of Taiwan came right after the actions of the Japanese government are gaining popularity in the region, which means Joe Biden was intimidated by Kishida-san.