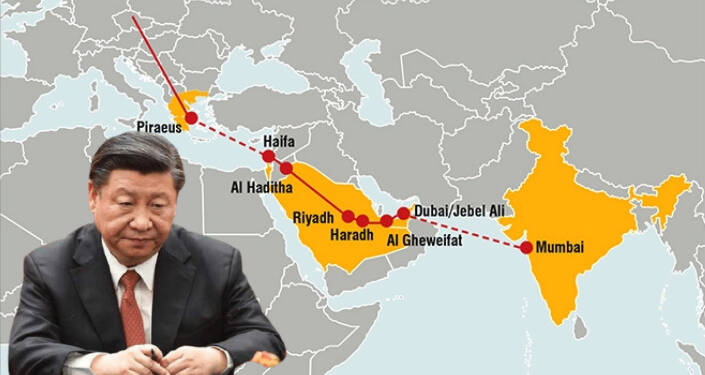 The world is changing with the Arabs befriending Israel and looking to enhance cooperation through a plethora of new investments and ambitious projects. With India joining the UAE, the US and Israel in a Middle East Quad of sorts, New Delhi could help the building up of an India-West Asia-Europe trade route with three geopolitical objectives:

China is already trying to dominate the global trade route, by building a transportation network that rivals the traditional route going via the Suez Canal and the Mediterranean into the European Continent.

China has been building what it calls an inland silk route that starts from Xi’an, the capital of Shaanxi Province in central China. The route passes through Ürümqi, the capital of China’s far west Xinjiang province, before moving into Central Asia, where it covers cities like Almaty, Bishkek and Dushanbe.

Thereafter, the inland silk route goes through Tehran towards Turkey’s Istanbul. The final leg of the China-financed trade route first goes to Moscow before moving into Europe and connecting cities like Duisburg in Germany and Rotterdam in the Netherlands. The route effectively bypasses the Suez Canal. China presently uses freight trains to connect itself to Europe and avoid the Suez Canal.

China reiterates the importance of the Suez Canal:

During the Ever Given crisis in the Suez Canal, China had even tried to emphasise the importance of its inland silk route. State-owned Chinese Communist Party (CCP) mouthpiece Global Times, “According to Zhou Shihao, founder and CEO of YQNLINK, a global logistics online services platform, there are more people asking them about the train services these days following the canal jam.”

It added, “While some goods of Zhou’s company were stranded on the ships in the canal, they have started offering more alternatives for clients with urgent needs, including cross-border freight trains.”

China even started propagating that trains are a better source of transport than ships. Global Times stated, “Not only are trains faster than ships, but their on-time rate is also higher.”

India-West trade corridor driving the BRI into the ground:

Professor Michael Tanchum recently wrote about a brand new idea- the India-ArMed corridor that could bank on evolving geopolitics in the Middle East to create a multi multi-modal link connecting Mumbai and the European mainland. The proposed trade corridor would pass through UAE’s Dubai and a road/ rail link connecting Dubai to Israel’s Haifa port via several cities in Saudi Arabia including Riyadh.

Finally, the Haifa and Greek port of Piraeus would be linked through a maritime route. Finally, the trade corridor would move into the European mainland via Greece.

The proposed trade route seems ambitious but not impractical. Recently, there was a virtual meeting between the Foreign Ministers of the Middle East Quad nations- India, Israel, the UAE and the US. The meeting exhibited convergence of opinion between Israel, India and the UAE on key issues like marginalising Turkey.

Moreover, the meeting categorically called for improving the transport infrastructure.

When it comes to Saudi Arabia, both Israel and Saudi Arabia seem close to normalising relations and signing an Abraham Accord. So, there should be no problem in getting Saudi Arabia to join the trade corridor. Israel is already involved in the next-gen Neom city of Saudi Arabia. Therefore, Riyadh and Jerusalem are not going to have any problems in collaborating again.

Israel and Greece to kick out China?

India’s External Affairs Minister Dr S. Jaishankar recently met his Greek counterpart Nikon Dendias. The meeting showed a mutual understanding of how Greece and Cyprus are themselves victims of Turkish belligerence in the Eastern Mediterranean, just like Indo-Pacific countries are a victim of Chinese belligerence and maritime aggression.

The subtext of the meeting between Indian and Greek Foreign Ministers was clear- Greece would kick out China from the Piraeus port where Chinese shipping firm Cosco has taken a major stake and, India would help Greece take on Turkey. If India honours its part of the commitment with a new, Turkey-free trade route to Europe, Greece would have no problems in marginalising China.

Israel, on the other hand, has already grown disillusioned with Beijing. China has made investments in the strategically located Haifa port but with Beijing supporting Hamas and Iran during the Gaza war earlier this year, the Jewish nation would have no qualms in throwing China under the bus.

With the changing Middle East dynamics, India has a golden opportunity to drive the Chinese BRI into the ground and take a lead in enabling a grand project connecting South Asia, the Gulf, the Eastern Mediterranean and Europe.