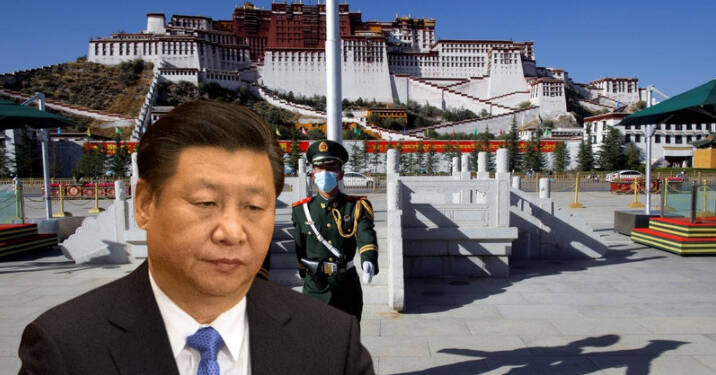 China is embroiled in a tense military standoff with India for the past 18 months now, and during this time, the CCP has been humiliated time and again. The PLA, on its part, has had the necks of its soldiers mercilessly snapped by Indian brave hearts who are continuously giving hell to the Communist nation in Eastern Ladakh. In a bid to perhaps save face in the Himalayas where it has gotten embroiled with the battle-hardened Indian forces, the PLA had earlier this year ensured a desperate lookout for Tibetans to serve China as soldiers. Essentially, the CCP was working out a mechanism where Tibetans help the Chinese state in colonising Tibet, which is already a victim of illegal Chinese occupation.

However, this effort has proven to be a disaster like no other. According to a report by Times Now, despite China’s all-out effort to recruit Tibetans in the People’s Liberation Army and para-military outfits, the response from Tibetans has been tepid. This, despite the strongarm tactics and efforts by the CCP to force monks to bless the recruits.

The Times Now report said, “In the Ngari Prefecture, the westernmost part of Tibet, adjoining Ladakh, the PLA had laid down the law: one young man from every household and despite all that and a handsome stipend, only 63 have joined. They are being trained for 3 months at Shiqanhe… The other area where there has been forced recruitment is the Chumbi Valley, adjoining Sikkim. Recruitment began on August 2 and the cadets are being trained at Nakchu, in Tibet from September 16.”

The curriculum includes physical training, drill and maintenance of accommodation. The recruits have had to hand over their mobile phone to the authorities. They are only allowed one call home. Essentially, China had thought it could conduct a mass-enrolment of Tibetan conscripts to fight for it against India, however, those plans have now proven to be a dud.

Tibetans Not Willing to Commit Genocide Against Their People

China also planned at driving a wedge within the Tibetan community with its enrolment exercise. However, Tibetans have resoundingly slapped the CCP and its private militia force – the PLA in the face. Tibetans – who share a culture with India, have made it clear they have no interest in fighting on behalf of the PLA or for it. The PLA is known to commit the most horrifying of atrocities and human rights violations on Tibetans. As such, Tibetans do not want to be a part of the PLA’s sins and are instead choosing to reject the CCP’s moves in their land.

It was in 1950 that the newly established Peoples Republic of China (PRC) had launched an invasion in Tibet, which until then, was a free and sovereign region with a unique culture that bears little to no resemblance to that of China. The Chinese armed forces marched across Tibet until early 1951 and established Chinese control over the region subsequently. Back then, scores of Tibetans, including the topmost leader of the Tibetan Buddhist order – the Dalai Lama had fled to India seeking refuge. India provided a safe shelter to Tibetan refugees, and today, the community is thriving in the country and has even set up a Tibetan government in exile at Dharamshala.

For several centuries now, India and Tibet have inextricably been tied to each other – and China has always envied the bond which these two great civilizations share. Buddhism – which originated out of India was quick to sweep all across Tibet. Tibetans have a sense of respect for Indian culture, which is from where their faith originated.

So, when the PLA asked ordinary Tibetans to join its ranks – they all knew what the task would entail. Not only would it include betraying their people but it would also mean that the CCP would make them fight India. Now, Tibetans are in no mood to fight either their people or India, so, most of them decided to give a pass to the PLA’s recruitment drive. Furthermore, Tibetans know that India under Prime Minister Narendra Modi is gradually stepping up the rhetoric for their land to be freed from the clutches of Communist China. As such, they are simply not motivated enough to pick up arms against India.

Chinese soldiers cannot stand the unforgiving climate of the Himalayas, especially in Eastern Ladakh – where the PLA and Indian Army are engaged in a standoff. The Han Chinese – which makes the bulk of the PLA’s fighting force are simply too unmanly to fight in harsh conditions. During the last winters, these snowflake soldiers collapsed in Eastern Ladakh like paper cards. Han soldiers cannot survive the Himalayan winters which forced the PLA to recruit Tibetans in the first place.

However, Tibetans hate the Chinese. Tibetans would rather see PLA soldiers die fighting India than act as their substitutes by being recruited in the PLA.

The people of Tibet want independence from China. That automatically means that the war for Tibet’s freedom is half won. If the people of Tibet do not want to live under Chinese subjugation, it goes without saying that the CCP will not be able to hold its fort for long. Xi Jinping is being forced to resort to optics now. Recently, for the first time after assuming the role of the Chinese President, Xi Jinping visited Tibet and orchestrated a grand welcome for himself, in which CCP stooges pretended to be Tibetan citizens who were overwhelmed to see their supreme leader among them.

So, the CCP is clutching on to the last straws now. It is now time for the free world to step up efforts to free Tibet from China. The people of Tibet want freedom, and the least that democracies around the world can do is deliver the same to them.