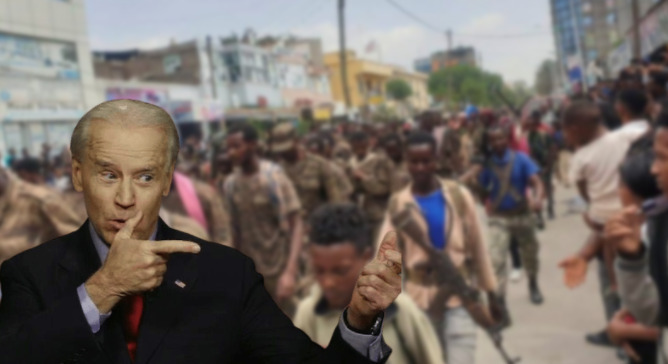 The United States of America – a beacon of democracy and liberty, is a nation, which has historically never shied away from pushing countries across the world into war, carpet bombing them and violently effectuating regime-change campaigns. Ethiopia has taken a centre stage now, as the focus of the world shifts to the Horn of Africa. Ethiopia is currently facing a rebellion in its northernmost region of Tigray. The rebellion is led by a group called the TPLF. The Biden administration claims that Ethiopia’s forces and officials are committing human rights violations in Tigray, and therefore, the U.S. must get involved with a ‘humanitarian intervention’.

TFI had predicted that an all-out war was soon going to descend upon the Horn of Africa. Now, our predictions are coming true – as Democrat-friendly media steps up the rhetoric for a U.S.-led “humanitarian intervention” in Ethiopia, which would supposedly put an end to the fighting between the rebelling TPLF and the Ethiopian government. In the name of “humanitarian intervention,” the Biden administration seems all set to send in U.S. boots on the ground, and push another decent country into the mouth of a prolonged war.

According to a report by Reuters, the African Union and the United States see a “small window of opportunity” to end fighting in Ethiopia, as the United Nations warned that the risk of Ethiopia spiralling into a widening civil war is “only too real.” AU envoy for the Horn of Africa, former Nigerian President Olusegun Obasanjo warned, “The window of opportunity we have is very little and that time is short.”

Essentially, the AU and U.S. are pushing for a ceasefire between the two warring sides, and that would inevitably involve the usage of UN peacekeeping forces. Mind you, it is highly unlikely that the rebel TPLF would be able to overthrow the Ethiopian government led by mass leader Dr Abiy Ahmed. The Biden administration and its lackeys know this very well, which is why they are pushing for a ceasefire in Ethiopia. Remember, a ceasefire is not a decisive solution to the Ethiopian conflict. It is merely a temporary pause, whose control will come to rest in the hands of the U.S. The Biden administration is keenly interested to build a heavy presence in Ethiopia, by which it will be able to control the Horn of Africa as a whole.

The ceasefire between the two warring sides in Ethiopia could go bust at any time, and fighting would then resume once again. However, there is a high chance that Biden would use the intermediate period to build a U.S. troop presence in Ethiopia, thus tilting the scales in favour of the TPLF – which the U.S. has historically lent support to.

Bloomberg went a step ahead. In an opinion piece for Bloomberg, James Stavridis openly called for the U.S. to intervene in Ethiopia. He wrote, “The U.S. should also be willing to participate in a UN-led peacekeeping effort to separate the warring parties, and use its logistical capabilities to ensure that aid can flow to every area. The military’s U.S. Africa Command has deep knowledge of the region and the Ethiopians, and could help in structuring such a peacekeeping force.”

Stavridis then went on to opine how the U.S. not intervening now would perhaps play out in an ugly manner, as it did during the conflict in Rwanda three decades ago. He then quantified the problem by saying how Ethiopia was much larger and more populated than Rwanda, and how not intervening in its conflict could be disastrous.

Read more: Obama had set the Arab Spring in motion, Biden is starting the Horn of Africa spring

Satavidris also praised Biden’s choice of Jeffrey Feltman as the U.S.’ special envoy to the Horn of Africa. He said Feltman is a good choice for the job. Why would he say that? Feltman is said to be close to the CIA, and his appointment to the Horn of Africa made it obvious for us at TFIglobal that Biden was up to no good in the region.

Eritrea is a relatively newer nation, having separated from Ethiopia in the 1990s. The country had to fight a 30-year long independence war before it succeeded under the leadership of its incumbent President Isaias Afwerki. However, ever since Abiy Ahmed, a man of mixed Oromo-Amharic parentage came to power in Ethiopia in 2018, ties between Ethiopia and Eritrea were fixed and began flourishing, to the extent that last year, Eritrea unofficially sent in its forces to help the Ethiopian government fight the TPLF.

Of course, Eritrea itself has an axe to grind with the TPLF. In 1998, a war broke out between Eritrea and a TPLF-ruled Ethiopia, in which Eritrea was defeated.

Now, the Biden administration has sanctioned Eritrea for helping Ethiopia fight the TPLF. If this does not lay bare Washington’s shameless support for the TPLF, we don’t know what does. The sanctions targeted the Eritrean Defense Force and Eritrean President Isaias Afwerki’s political party, the People’s Front for Democracy and Justice. Also blacklisted were the head of the Eritrean National Security Office, Abraha Kassa Nemariam; the Hidri Trust, the People’s Front’s holding company; and Hagos Ghebrehiwet Kidan, an economic advisor for the party.

Why is Biden is Plunging Horn of Africa into a War?

Ethiopia is an assertive country, and it is close to both Russia and China – which is the case with most countries in the Horn. Meanwhile, Iran too has its interests in the Horn of Africa and wants to have a significant influence over Somalia and other countries so as to secure Yemen in the event that Tehran is able to decisively win the ongoing war between Saudi Arabia and Houthis there.

Read more: Ethiopia enters endgame as the US goes all out to destabilise it

The U.S. wants to have a presence all across the Horn of Africa – with an eye on Yemen, and also wants to dominate the Bab-el Mandeb Strait. The Bab-el Mandeb Strait ultimately connects the Gulf of Aden and the Red Sea and ensures access to Arab countries. This makes Ethiopia a vital location. The U.S. wants to establish its presence in Ethiopia, and address growing Russian and Chinese presence in the region.

The coup in Sudan, which many believe has the backing of Russia, has made the Biden administration even more jittery. The coup is a sign of how Moscow, and not Washington has come to command massive influence in such a strategic region. Therefore, Biden feels even more motivated to initiate an all-out conflict in the Horn of Africa to consolidate the U.S.’ position in the region and mint some cash for the military-industrial complex of the country.

Biden could easily have supported democracy in Ethiopia by supporting the Abiy government and helping it eradicate the TPLF menace. But, for mere geopolitical gains, Biden chose to set the entire region on fire.