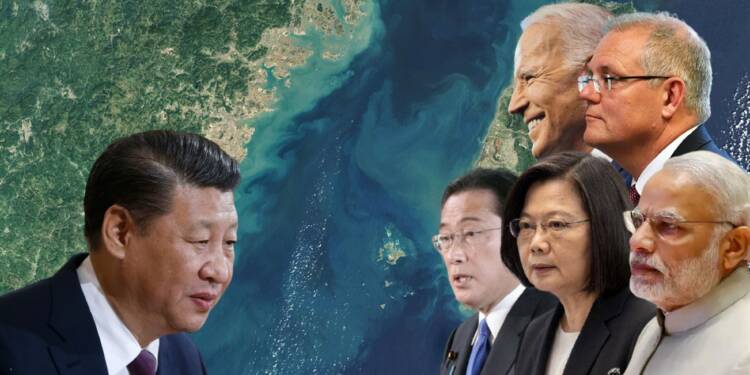 Taiwan is building eight state-of-the-art submarines. The first submarine is expected to be delivered to the Taiwanese military by 2025. Taiwan has chosen extremely stealthy submarine designs which can exert a heavy toll on the Chinese People’s Liberation Army Navy (PLAN). The island nation will build diesel-electric submarines, instead of nuclear-powered ones. Diesel-electric submarines are cheaper and even more importantly, the electric motors produce less noise when submerged in water, as compared to nuclear reactors. The stealthy submarines will help Taiwan in intercepting and attacking Chinese troops trying to cross the narrow Formosa Strait in case of any invasion plans.

But Taiwan is not alone. Taiwan is being helped by seven countries from around the world, and China is spooked. Let’s deal with the Chinese reaction first. Here’s how the Chinese Communist Party reacted to news of seven democratic countries collaborating with Taiwan for the manufacture of submarines. China’s foreign ministry said the Taiwanese “authorities are colluding with external forces” on the program. In a statement, a Chinese foreign ministry spokesperson said the countries should refrain from participating in the submarine effort, “stop military ties with Taiwan and stop supporting the ‘Taiwan independence’ secessionist forces.”

It added that these countries are “playing with fire, and those who play with fire will get burned themselves.”

The United States, United Kingdom, India, Australia, South Korea, Canada and Spain are the nations that have been helping Taiwan build cutting-edge submarines which can blow a Chinese invading naval fleet up in smoke. According to Reuters, the United States has provided key technology, including combat-system components and sonars. The United Kingdom has provided crucial help as well. A veteran of Britain’s Royal Navy submarine fleet, retired Commodore Ian McGhie, was a key figure in the drive to recruit submarine expertise, according to a person familiar with his role. Britain also has approved multiple export licences in the past three years for UK companies to supply submarine components, technology, or software to Taiwan.

The Reuters report added, “Taipei also succeeded in hiring engineers, technicians and former naval officers from at least five other countries: Australia, South Korea, India, Spain and Canada.” These experts are guiding the submarine builder – CSBC Corporation Taiwan on how to go about accomplishing the mission at hand.

The World Has Come a Long Way:

From refusing to have anything to do with Taiwan, to refusing it submarines, to now helping the island nation build its own submarines – the world has definitely come a long way. Already, Japanese, American and possibly even British submarines are prowling in the hotly contested South China Sea region, in a bid to push back against Chinese belligerence. By helping Taiwan build its own submarines, the democratic world is ensuring that Taipei is made self-sufficient.

The time is not far when Taiwan will also lay its hands on nuclear-powered ballistic submarines, which would effectively put China at a disadvantageous position. Already,  China will have to face geographically adverse conditions in case of an attempted Taiwan invasion. The PLA will have to transport hundreds of soldiers through the narrow Taiwan Strait into hostile landing beaches. Thereafter, Chinese troops will find it hard to sustain themselves while finding their way through dense mountains to reach Taipei. All of this, while Taiwanese defences rain fire on the invaders.

Also, Taiwan has been giving China nightmares in Lithuania, Honduras and the Solomon Islands. While the Solomon Islands are at the brink of a civil war because of increasing Chinese influence, Lithuania has taken many steps to hurt Chinese interests, ranging from campaigning against Chinese smartphones, to opening the first “Taiwan Representative Office” in the capital city, with the name Taiwan on it. In Honduras, a pro-China leader seeking to rise to power has been strong-armed by the U.S. and Taiwan into rectifying her rather friendly tone towards Beijing.

The spree of diplomatic defeats that Taiwan and Tsai Ing-wen have dealt on Xi Jinping has left no room for the paranoid authoritarian to save face.