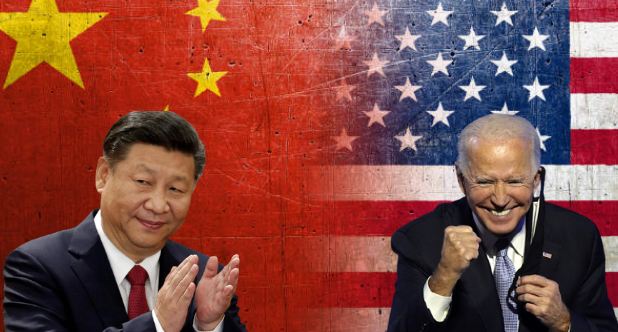 The United States of America, thanks to Joe Biden, is suffering on multiple fronts. Particularly striking is the 30-year-high inflation created by the Biden administration. With sky-high inflation, Biden sensed that if gasoline prices are not brought down soon, his political career could land up in tatters. Therefore, Washington orchestrated a strategic oil release from the reserves of the U.S., UK, India, Japan and South Korea.

Earlier, Biden had been lobbying with OPEC+ to release oil into the global markets to lower soaring prices. Saudi Arabia’s de facto ruler, crown prince Mohamed Bin Salman – whom the Democrat president has been cold-shouldering for the past year – refused to oblige, in a massive snub to Biden.

But guess which country released oil from its strategic reserves as well? China did. Now it makes no sense for the United States and China to agree on anything, but when it came to oil, Washington and Beijing were seen cooperating like there prevailed no animosity between them. So, did China release oil from the kindness of its heart and the purity of its soul? No, it did not. As it now turns out, Xi Jinping was able to exact quite a high price for the strategic release of oil.

The Biden administration has been forced by China to give up on U.S.’ activism in support of Uyghur Muslims, against whom the CCP is committing cultural genocide in Xinjiang province. The Uyghur Forced Labor Prevention Act, which passed the Senate unanimously in July, is now being stalled by Democrats and the Biden administration from clearing Congress and landing on the President’s desk. Sen. Marco Rubio (R-Fla.), the co-sponsor of the Senate’s version of the bill said U.S. corporations that profit from forced labour in China, such as Apple and Nike, have been lobbying against the bill.

But that is not the only reason for the bill not clearing Congress. The truth is that the Biden administration has asked Democrats to go slow with the bill. According to the Washington Post, Biden administration officials have been quietly telling lawmakers to slow down. Administration sources confirmed that in an October call between Deputy Secretary of State Wendy R. Sherman and Sen. Jeff Merkley (D-Ore.), the other co-sponsor, Sherman made it clear that the administration prefers a more targeted and deliberative approach to determining which goods are the products of forced labour.

The report added, “while the administration supports the legislation in public, they are asking Democrats to essentially water it down in private.”

Recently, Joe Biden and Xi Jinping were face to face, albeit, virtually. Nevertheless, their meeting was significant, as it was the first where the duo sat down to talk about issues facing their countries and the ties between U.S. and China. The timing of the meeting was particularly interesting. According to a source quoted by Nikkei Asia, “Everything moved in accordance with the schedule set by the Chinese side. It was the perfect outcome.”

By strategically getting the Peoples Daily to publish an entire page designed to serve Jinping’s political goals. Xi Jinping has shown Joe Biden agreeing with a new resolution passed in China, which will be playing a big role in Jinping making his case for a third term as China’s President.

Read more: Biden called up Jinping and assured him that the US will respect the “One China Policy”

The major portion of the newspaper’s front page was reserved for the full text of the third resolution on history. A photograph of the two leaders alongside each other was relegated to a low position on the page, making it look almost like Biden is celebrating the historic resolution.

Essentially, Joe Biden is going out of his way to help Xi Jinping. Meanwhile, he is also legitimising Jinping’s brutal rule. On November 7, the Secretary of State made an interesting remark. He said, “One of the errors of previous approaches to policy towards China has been a view that through U.S. policy, we would bring about a fundamental transformation of the Chinese system. That is not the object of the Biden administration.” A day later, the plenary where the third resolution of history was passed, began.

Joe Biden is a mere puppet in the hands of the CCP, and one cannot remember the last time the United States was so deep in a crisis.