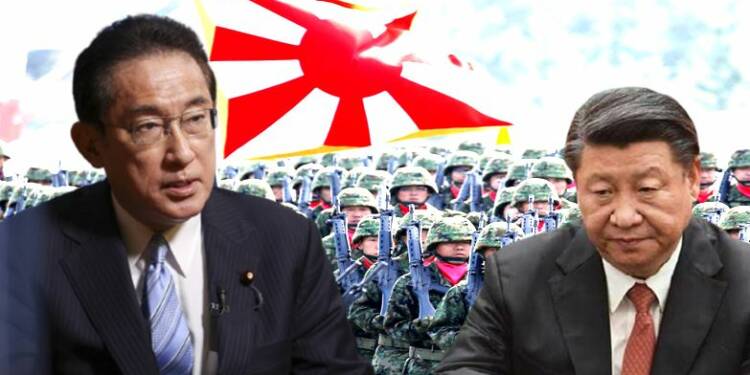 Japan is all set to arm itself with deadly technologies against China. Japan’s military spending has suddenly surged to an unprecedented $53.8 billion, which forms around 1.3% of Japan’s GDP. Japan had initially approved a defence budget of $47 billion, but Prime Minister Fumio Kishida requested additional military spending which has taken the total Japanese defence budget over the informal cap of 1%.

Why Japan wants to get rid of the 1% cap on defence spending:

Japan has been labelled as a pacifist nation in the post-Second World War era. The country keeps a 1% ceiling on its military spending, due to which Japan’s defence budget has never exceeded 1% of its budget over the recent decades.

Also read: Japan is going all in to jack up its military and fight China with or without US

On the other hand, Japan’s biggest enemy – China, is the second highest military spender in the world next only to the United States of America (USA). In fact, the communist nation spent a whopping $252 billion in 2020 on its military. The mismatch in Chinese and Japanese defence budgets have allowed China to mobilise a huge military force. Therefore, Japan has been looking to scrap the informal 1% cap on defence spending since the Shinzo Abe era.

How Japan used the COVID-19 excuse:

The COVID-19 pandemic came as a perfect excuse for Japan. The pandemic has not only claimed many lives, but has also contracted the global economy. The Japanese economy itself has witnessed 29% contraction. The future is uncertain and therefore Japan is preponing many of its military plans to keep its armed forces adequately armed.

In fact, over half of the additional $6.8 billion military spending is going directly towards payment of things that Tokyo was supposed to buy over the next few years anyway. Japan claims that the additional defence spending is supposed to give the industry a boost when it truly needs some kind of support. In the process however, Japan will end up arming itself with technologies and capabilities which would have otherwise been inducted in later years.

With its enhanced defence budget, Tokyo is all set to go on a military spending spree. At top of its list is the acquisition of the US-built PAC-3 MSE air defense missiles to enhance capabilities for intercepting incoming ballistic missiles. Japan is also accelerating deployment of two squadrons of improved domestic Type 03 Chu-SAM KAI medium-range surface-to-air missiles, vertical missile launch systems for two new Mogami-class (or 30FFM) frigates, three P-1 patrol planes and a variety of additional anti-submarine weapons.

In the entire process, Japan seems to be preparing for the eventuality of an armed clash with China, either over the far-flung Senkaku islands or the Chinese plans to invade the island nation of Taiwan. Since defending the remotely located Senkaku islands is considered a tough task, Tokyo is to acquire up to 150 Subaru-Bell UH-2 helicopters to replace its fleet of 127 UH-1J utility choppers. UH-2 helicopters will improve Japan’s capability of quickly carrying and deploying troops by parachute or repelling cables, as these helicopters can carry a total of 13 personnel at a time.

As for Taiwan, Japan has some extraordinary plans. It is expediting plans to deploy a total of 570 troops to the Ishigaki island that lies only 135 miles east of Taiwan. The contingent of 570 troops will complement the PAC-3 air defense and Type 12 anti-ship missile batteries, apart from a defensive garrison. Also, Japan possesses surveillance radars on Yonaguni island, which is located just 70 miles east of Taiwan. These assets will help Japan defend Taiwan, in case China ever decides to attack the island nation in a bid to invade it.

Japan is thus using COVID-19 as an excuse to fast-track its military deployments and procurement. In the process, Tokyo has almost completely scrapped its status as a pacifist nation.