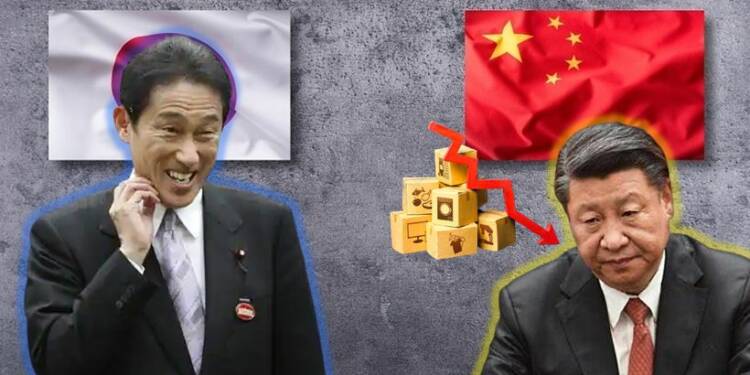 China’s economy is falling and some of the major benefactors of this crisis in China are India, Vietnam and Indonesia. However, if the tectonic shift in Japan’s economic policies over the past few months is any indication, Japan is also striving to make the most out of China’s miseries.

Japan became the world’s second-largest economy just behind the USA. However, due to the stagnation in Japan’s demography and lack of human resources, Japan’s rise came to a halt. Japan failed to incorporate the direly needed changes, economic as well social, to sustain that miraculous growth. And resultantly, it lost the status of the economic powerhouse to China, in 1999.

Japan all set to fix the historical mistake:

But a mere 22 years later, Japan has now got the golden opportunity to mend the historical mistake. China’s economy is in tatters and that means that Japan can rise to the helm again. Needless to say, it has all the means to materialize its ambitions. Japan is a world leader in the realm of innovation and technology. Its diplomatic cachet is simply tremendous. It has the backing of India—a nation slated to become the world’s most populous by 2027—which can very well provide Japan with highly skilled human resources and a vast market to boost its exports and manufacturing sector.

Japan is not willing to squander this opportunity either. Its recent economic policies are designed to make Japan look like a better investment destination, if juxtaposed with China. Of all, the most crucial policy to see the light of the day was announced last month.

Japan’s Prime Minister made a bold move by announcing a massive 56 trillion yen ($490 billion) fiscal stimulus package, a part of which will be used to lure microchip manufacturers to the country. On an immediate basis, Japan is all set to subsidise a new $7 billion chip factory in western Japan planned by the Taiwan Semiconductor Manufacturing Co. (TSMC) and Sony Group Corp. The government’s immediate subsidy to TSMC is expected to be up to ¥400 billion.

Also read: In a final blow to China’s chip industry, Tokyo will pay big money to chip companies if they move to Japan

This is huge. Monopoly in the semiconductor production market is a dream that every nation wants to materialize. China also dreamed of establishing itself as a semiconductor chip powerhouse, but it failed miserably. Now, it is Japan’s turn.

Similarly, Japan’s EV (electric vehicle) push is also significant. Equally significant is the fact that Japan is also targeting China’s domestic EV market in its quest to outpace its Chinese rivals. Toyota is looking to aggressively dominate the Chinese EV market with some affordable cars from next year.

It will turn to local partner BYD for key technology and create an affordable yet spacious EV for the Chinese market. Considering Japan’s expertise in the automobile sector, it is a sure thing that Toyota’s products will be preferred by the Chinese consumers, rather than plagiarised products of Chinese firms – just like American iphones are sought-after rather than China-made cheap mobiles.

Also read: Japan uses Covid-19 as an excuse to arm itself with deadly technologies against China

Moreover, to stave off its human resource crisis, Japan is already moving in direction of loosening its migration policy to facilitate the entry of highly skilled labourers into Japan’s so-far closed societies. In April 2019, Tokyo formally opened its doors to low-skilled foreign workers after the Diet (Japan’s national legislature) amended the Immigration Control and Refugee Recognition Act.

Interestingly, Japan is also striving to turn Southeast Asia into a logistical hub. Already, several Japanese companies and manufacturers have facilities in Southeast Asian nations. Now, in a move that is aimed at countering China and also ensuring that ASEAN as a whole relies on Japan when it comes to supply chain fulfillment and distribution of goods, a Japanese developer is going to change the face of logistics in the region.

Japanese developer Daiwa House Industry will soon be launching an international logistics business in Southeast Asia, catering to the growing number of Japanese manufacturers operating in the region. According to a report by Nikkei Asia, Daiwa Logistics will provide a one-stop shop for third-party logistics services, including transportation and warehousing.

Also read: Japan is encircling China with logistic hubs in South East Asia to give it a slow and excruciating death

And results of Japan’s massive push to capitalize on China’s fall are already visible. More than 60% of foreign affiliates of Japanese companies plan to post operating profits in 2021. December is set to see the most companies listed in a single month in Japan, with a total of 32 firms due to go public before the end of the year, according to data compiled by Bloomberg. So, Japan is trudging ahead in the right direction. It must aggressively pursue predatory economic policies to exacerbate China’s economic woes and boost its own economy. Japan is finally treading on the path to reclaim its past glory.

Rural China is rising, and Urban China is collapsing